Conversations on Jewish Life on the Island of Rhodes. A pop-up installation to discover, discuss and imagine.

New York, NY – September 24, 2019 – A fully immersive experience celebrating and exploring the lives of the Jews of Rhodes, the multimedia installation “Los Corassones Avlan” (The Hearts Speak, from a Sephardi saying) will open in the heart of the West Village, at 148 West 4th Street, on October 29th through November 24th, 2019. Opening hours: Sunday through Thursday from 1 pm to 9 pm. Friday from 1 pm to 4 pm and Saturday from 5 pm to 10:30 pm.

Coffee, tea, burekitas and pastry will be served daily during visiting hours. The bar behind the exhibition space is open to the public at night.

Crossing over the lines between cultures, history and personal memories, “Los Corassones Avlan” has been created by Centro Primo Levi and the Rhodes Jewish Historical Foundation to challenge the idea of traditional museum narratives, expanding on the previous project “the Rome Lab”, a 2017 installation conceived to play on the tension between personal memory, official history and ongoing research debates. 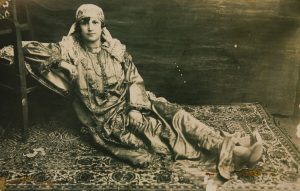 At the core of “Los Corassones Avlan” there is a thread of personal and intimate connection bonding past and present, imagination and history, life and oblivion. Inspired by the recollections and family tales of Auschwitz Survivor Stella Levi and Aron Hasson’s Los Angels-based collection of artifacts and books, the fascinating story and life of the Jews of Rhodes will come alive as a tapestry of experiences and conversations. 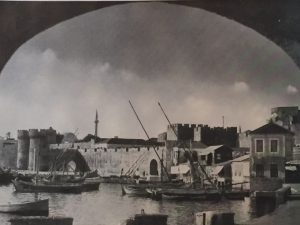 Artifacts, archival photos and books documenting traditional Jewish life in a Mediterranean island together with life-size projections and surprising soundscapes will invite the public to visualize this past and reflect on the complexities of memory and (hi)story telling.

The project will be installed in a 19th century carriage house on West 4th street that shares the courtyard with the historic night bar named after Antoine Saint-Exupéry’s novel Vol de Nuit. The bar was once a popular eatery and cabaret called The Samovar, which the photographer Jessie Tarbox Beals seized in one of her legendary images of lower Manhattan and where Al Jonson is believed to have performed in his early career. 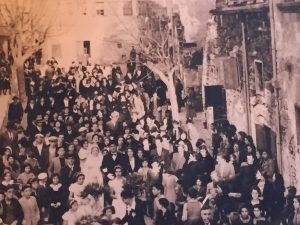 During the month of November, the carriage house, which is usually closed, will become home to the exhibition and to roundtables, readings, talks, film and music presentations, where the public will experience the little-known story and traditions of the “Rodeslis”, the Jewish community living on the island of Rhodes  for an unknown number of centuries until its destruction in 1944.

A mercantile and cultural hub during Antiquity and the Byzantine period, Rhodes retains traces of Hellenistic Judaism. Under Ottoman rule, it became an important Sephardi center, which – like many cities in the Mediterranean and elsewhere – local Jews affectionately called “Little Jerusalem”.

The breath-taking views of the sea, the cobble-stone narrow streets of the Juderìa, the bright colors of the exotic cuisine and the sweet sounds of the Judeo-Spanish language are still very vivid in Stella Levi’s recollections of Jewish life on the island where Turks, Greeks and Jews found forms of coexistence under different rules.

The Turkish and Rodeslis communities shared the traditional bath and their century-old rituals, Greek, Turkish and Rodeslis cuisines, music, and languages overflowed into one another. With the advent of colonialism and the fall of the Ottoman Empire, Rhodelis began to emigrate to other countries, to Africa, the Americas and Europe. Their rich cultural heritage blossomed in new communities they created or joined around the world.

The Juderia became the imagined home they carried to their new countries.

With its ever-changing form but inalterable charm, the carriage house at 148 West 4th Street was always a place of hospitality, where people met to eat and talk. 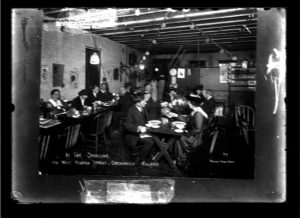 This pop-up installation will add a new chapter to the building’s history becoming home to, not only the exhibition but weekly gatherings where the public is invited to  listen to memories and explore the many ways in which we think of history.

Centro Primo Levi has previously created pop-up installations in historic New York buildings: on West 12th Street in the locals of the famed Italian bookstore Vanni, and at the Belle Epoque’s Lorillard tobacco showroom on Broadway. Each of them sought to present archival material through instruments borrowed from film and theater and question with a contemporary sensibility how today’s viewers understand the past.

Founded by Aron Hasson in Los Angeles, the Rhodes Jewish Historical Foundation, is a non-profit organization, dedicated to preserving the unique history of the Jews of Rhodes. The Foundation collects artifacts, books and documents and makes them available for exhibitions and publishing projects all over the world. Thanks to its network, many families with Rodesli origin can find out more about their history and connect to other family members. Every year, it publishes a beloved picture calendar that features images and artifacts from the collection. The Foundation also published the only existing guidebook to Jewish Rhodes and series of historical books on past and present of the community. The RJHF has created and maintains the website of the Jewish Museum go Rhodes.

Centro Primo Levi is a New York based organization inspired by the humanistic legacy of writer and chemist Primo Levi, who survived Auschwitz and became a fundamental reference in the discourse on history and memory in modern societies. CPL fosters education and debate on Primo Levi’s work and the history of Italian and Mediterranean Jews. Topics discussed in our public programs and academic seminars are disseminated through our online monthly Printed Matter and publishing endeavor, CPL Editions.

The Center works closely with many Italian organizations, the Italian Cultural Institute in New York and universities including NYU, The New School, Columbia University, CUNY, UCLA and the Hebrew University of Jerusalem. www.primolevicenter.org

The Jews of Rhodes in a nutshell

For centuries, the Island of Rhodes has been a doorway to different worlds including Persian, Greek, Hellenistic, Roman, Byzantine, Ottoman, Catalan, Genoese, Venetian and Italian. Rhodes was home to a composite Jewish community that, beginning in the first century before the common era, welcomed Jews from different cultures, ranging from Romaniot to Sephardic, and different lands: North Africa, Spain, Sicily, Turkey, and the far East.

The island was conquered by the Knights Hospitaller during the Crusades. Later it was taken over by the Turks, who welcomed the Sephardic diaspora originating from the Iberian Peninsula, where the Catholic Kings of Spain Ferdinando and Isabella had come to power, forcing all Jews to either convert or leave. Sephardic culture became dominant together with its language, Ladino or Judeo-Spanish. The Italians colonized Rhodes in 1912. In 1943 they surrendered the island to the Germans  leading to the deportation of the entire Jewish community in Auschwitz.

Rhodes has long been at the border between the western and the eastern worlds. Called by the Greek poet Pindar, “the bride of the sun”, since the first century b.c.e. the island has hosted a diverse blend of Jewish cultures from the Mediterranean region and beyond, stretching to the Far East.

Herod the great visited the island a number of times and it is said to have helped the local Jewish community. In 31 b.c.e. Herod met the victorious Octavian in Rhodes and proclaimed his loyalty to the new Roman emperor. In 653 the Arab conqueror, Mu’awiya, ordered the destruction of the remains of the Colossus of Rhodes. According to a legend, it was sold to a Jew who carried away 90 camel loads of bronze.

The 12th century traveler Benjamin of Tudela found some 400 Jews in the city of Rhodes. Jews arrived in Rhodes from the Aragonese territory during the 1280 persecutions.

In 1310, the Knights Hospitaller brought to an end the Byzantine rule and placed the island on the crusaders’ map, between the Western Roman Empire and Palestine, the “Holy Land”. Jews continued to live there under the Knights of St. John of Jerusalem (1309-1522). Meshullam of Volterra and Obadiah of Bertinoro visited Rhodes in 1781 and 1488 and found only 22 Jewish families.

In 1522 when the Turks attacked the fortress of Rhodes, the Jews sided with them., The Alhambra Decree enforced by the New Catholic Kings of Spain in 1492 had imposed the Jews to either convert or leave the Iberic Peninsula. A massive Sephardic diaspora started to hit the Ottoman Empire, which welcomed the Jews on its vast territories, including Rhodes.

In a short amount of time, the Sephardic culture came to dominate the others previously existing on the island and under Ottoman rule Rhodes became an important Sephardi center known as the “Little Jerusalem”. In the small space of the “juderìa” at least five chaverot, (synagogues or schools) have been active, likely spanning from the Romaniot to various Sephardic tradition. At least four of Rhodes’ modern synagogues are known: Kahal Gadol, built under knights’ rule perhaps over the ruins of an older one, Kahal Shalom, built in 1593; Kahal Kamondo (1865) and Kahal Tikkun Chatztzot which is thought to have been a cabalistic school. There were also many study rooms called Midrashim, the 17th century’s Yeshivah Israel and the Yeshivah Menashe founded in 1850 by Moses Menashe. His son Boaz “Effendi” was a Turkish judge.

In 1904 the Alliance Israelite Universelle, amidst the hostility of local rabbis and elderly sages, opened a boys’ and a girls’ school which, shortly after the arrival of the Italians, was replaced by the Italian school.

In 1912, after the Balkan Wars, Rhodes and other Dodecanese islands came under Italian rule and became the center of the Italian possessions in the Levant. There were about 4,500 Jews in Rhodes at the time. Between the fall of the Ottoman Empire and World War II almost half of the Jewish younger population left Rhodes and went to Argentina, Brazil, the United States, South Africa, the Belgian Congo, and Rhodesia.

Relationship with the Italians seemed initially positive. Jewish youth, confined in the ruins of the Ottoman Empire, regarded the new rule as an opening towards Western culture and modernity. The Regime considered the Jews as an accessible interlocutor in the colonial world and strategically deployed Italian Jewish institutions to help “westernize” their local coreligionists in the Mediterranean region and the middle East. In 1927, they found the Italian rabbinical seminary which was shut down ten years later in the wake of the racial laws.

After the capitulation of Italy to the allies in September 1943, in spite of their much more numerous troops, the Italian authorities surrendered the island to the Germans. For the most part, the Italian civil administration pledged loyalty to Mussolini’s collaborationist Italian Social Republic and remained in charge of non-military matters supporting German operations.

On July 24, 1944 1,700 Jews who had remained on the island, mostly elderly, women and youth, were deported to Auschwitz. It was the longest transport to a death camp and the end of one of the oldest and most diverse Mediterranean Jewish communities. Only 161 people survived and Rhodes became part of Greece in 1947.

Please Share This
I am the footer call-to-action block, here you can add some relevant/important information about your company or product. I can be disabled in the theme options.
Get In Touch
© Copyright 2019 Primolevicenter. Designed by Wordpress Customize