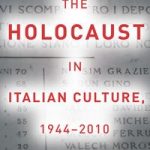 Robert Gordon
Robert S. C. Gordon is Professor of Modern Italian Culture at the University of Cambridge and a Fellow of Gonville and Caius College. He is the author of Primo Levi’s Ordinary Virtues (2001) and ‘Outrageous Fortune’: Luck and the Holocaust (2010).
The Holocaust in Italian Culture, 1944–2010 is the first major study of how postwar Italy confronted, or failed to confront, the Holocaust. Fascist Italy was the model for Nazi Germany, and Mussolini was Hitler’s prime ally in the Second World War. But Italy also became a theater of war and a victim of Nazi persecution after 1943, as resistance, collaboration, and civil war raged. After the war, Italian culture produced a vast array of stories, images, and debate through which it came to terms with the Holocaust’s difficult legacy. Gordon probes a rich range of cultural material as he paints a picture of this shared encounter with the darkest moment of twentieth-century history.
About the book
Italy’s modern history is entangled with the Holocaust in complicated ways. Fascist Italy was the model and origin for Hitler’s totalitarian racial state and adopted many of the Nazi’s racist laws from the late 1930s onwards, although debate still rages as to how far Fascist totalitarianism was or was not inherently racist from the outset and how far its racism was a tawdry copy of Hitler’s or a home-grown perversion.  Fascist Italy was also Nazi Germany’s prime European Ally as the genocide of European Jews was undertaken and was responsible for administering anti-Slavic and anti-Semitic policy in several occupied regions, as well as a crude and deathly colonial violence in Africa. Yet important historiographical work has shown how Italian officials – up to and including Mussolini himself – did much to frustrate the progress of deportations and massacres of Jews in the early period of the war. Already, then, before 1943, Italy was both part progenitor of and collaborator in genocide, and part uncertain fellow-traveller, even filibusterer. After 1943, this already uncertain status was made notably more so as Mussolini fell, Italy withdrew from the Axis and found itself split in two, de facto occupied in the centre and North by Germany (with the help of a restored Mussolini and diehard Fascists), with a civil war or partisan Resistance war raging.  Germany now started deporting Italian Jews and other Jews who had taken refuge in Italy (mainly to Auschwitz), although relative to the rest of Europe the numbers were small, in the thousands (many individuals aided and protected their neighbouring Jews). They also deported tens of thousands of Resistance fighters (mainly to concentration camps in and around Mauthausen); and hundreds of thousands of formerly allied Italian conscripts (to various internment camps). Now Italians were victims of the whole gamut of Nazi violence, although the rump Fascist state in the North was also an active perpetrator of deportations and massacres and the racial bureaucracy of the former Fascist state was still in place to aid and abet the deportation process.

This tangled history of Fascism and the war left Italy with a dark load of unresolved questions about itself, its historical responsibilities and its future after the war.  It has often been argued that the entire postwar era in Italy, up to the turn of the 21st century, was spent working through and working out answers to those questions.  Initially, as in many other nations, what was later termed ‘the Holocaust’, did not separate itself out as a discrete event within the mire of the war’s and the Fascist regime’s history and legacy; but, as this sketch suggests, once that distillation process did begin, the Holocaust too would pose deep and troubling questions to the polity and collective identity of Italy and Italians, with layer upon layer of complexity and daunting challenge.

This is the terrain that Robert S. C. Gordon’s new book, The Holocaust in Italian Culture, 1944-2001, aims to map out, tracing the progress of that slow, but profoundly illuminating encounter between Italian culture and society and the Holocaust.  It looks eclectically at as wide a range of cultural artefacts, events and practices as possible, at works of testimony and fiction, at cinema, art and architecture, at monuments, memorials and commemorative events, at songs, at publishing history, public debate and journalism.  First of all, this serves to underscore the sheer range and perhaps surprising wealth of important Holocaust representations to have emerged from within Italian culture, from written work by Primo Levi, Giorgio Bassani and  Natalia Ginzburg, to films such as The Garden of the Finzi-Contini (Vittorio De Sica, 1970), Seven Beauties (Lina Wertmüller, 1974), and Life is Beautiful (Roberto Benigni, 1997).  But more than this, the material is presented as deeply embedded in the local contexts that give very particular and unusual inflections or coordinates to this field in Italy, in ways that are distinct to the Italian history and culture of both the Fascist and the postwar eras.  Talk of the Holocaust in Italy is shown to present in challenging form or indeed to mask and displace questions about: Fascism, the anti-Fascist Resistance and its legacies, national character, Cold War politics, the role of the Church, European identity, immigration and multiculturalism (and so on).

The book aims to describe the circles of production and reception of this field of knowledge and representation of the Holocaust in Italy, starting with individual survivors and associations promoting memory of the camps; and spreading outwards to penetrate the wider culture through schools, civic commemorations and all the varied media and arenas of modern cultural practice.  Further, the book is constantly alert to the exchanges and interplay between the local or national context and corpus on the one hand and, on the other, the distinctly ‘transnational’ field of representation, imagination and enquiry about the Holocaust that has developed over the postwar era, as evinced by the global reach of phenomena ranging from the camp liberation newsreels to Anne Frank, from Eichmann in Jerusalem to Willy Brandt in Warsaw, from Holocaust on TV to Schindler’s List.  This means both looking at how Italian work has entered into the globalized field of Holocaust representation in different ways; and also looking at how imported representations, translations, reporting of foreign events and phenomena have filtered into the Italian field.