Near Washington Square Park through November 24, a living memorial dedicated to a 2,000-year-old Jewish community is manned by a spitfire nonagenarian survivor.

Jordan Hoffman for The Times of Israel

NEW YORK — In Lower Manhattan, a few steps from Washington Square Park and New York University, there exists a time machine. From now through November 24, the small room one normally passes to get to the courtyard outside the Belgian beer hall Vol de Nuit has been transformed into a tiny two-story “salon,” an outpost from a lost world.

The Greek island of Rhodes, off the coast of Turkey, had a small Jewish community as far back as the time of King Herod. During the long sweep of history, it has been under Byzantine, Crusader and Ottoman rule. Pre-Fascist Italy seized it in 1912, when it was known as a postcard island. Indeed, for years many of the first photography companies had outposts there, to take advantage of its natural beauty and diverse culture, and snapshots of Rhodes helped market cameras to the world.

That came to an end in 1944, when the Nazis rounded up 1,700 mostly elderly Jews, who spent nine days on a cargo boat and an additional 13 days in cattle wagons on the way to Auschwitz, making it the lengthiest deportation to a death camp. Only 151 people survived, among them the remarkable Stella Levi, whose survival and memory is at the center of this pop-up installation.

The exhibition is called “Los Corassones Avlan” (Ladino for “The Hearts Speak”), a co-production of the Centro Primo Levi, the Rhodes Jewish Historical Foundation and the NYU Casa Italiana. The Times of Israel attended on opening night, drawn in by the dark, rich colors of the room and the sound of a musician playing the oud. Dr. Indrimi Natalia, the elegant and eloquent executive director of the Primo Levi Center, was stationed at the door and our conversation was continuously interrupted by well-wishers. Everyone received a kiss.

Upstairs, filmmaker Rebecca Samonà walked me through the interactive displays. Artifacts from the Rodeslis community, many from Stella Levi herself, were enhanced with stashed video displays depicting moments of everyday life. An example of the interactivity: an old school desk from decades ago sat in the corner. As one approached, a motion sensor would trigger a small video screen stashed at the bottom of its circular inkwell, depicting images from Samonà’s documentary.

Nearby were fabrics from a baul, the Ladino word for bridal trunk. These laced gowns and sheets were prepared years in advance for women to wear at their wedding. They had the scent of history. Another display case boasted books from the Jewish community in Rhodes, in multiple languages including Ladino.

I was treated to a variety of authentic Sephardic sweets thanks to local baker Davi Roubini. The half-moon shaped travados had a mix of cinnamon and cloves, and while they had some sort of light syrup, they were not overly sweet like baklava. I also sampled the kurabyes, a shortbread cookie with sesame that was outstanding. (Had there not been other people around, I definitely could have downed the whole tray.) 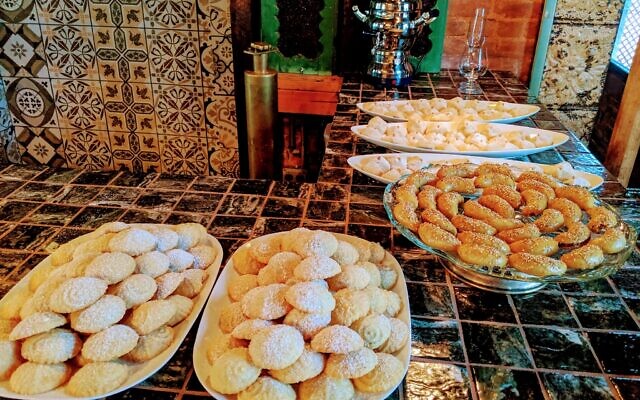 The highlight of the evening, however, was speaking with Stella Levi, even if only briefly.

“It makes me quite nostalgic,” this gorgeous, vibrant nonagenarian said from a seat at the center of the cozy and increasingly crowded room. Levi is fluent in English, Italian, French and Ladino, though she says that “only in Los Angeles” does she find people who can converse with her in that tongue. 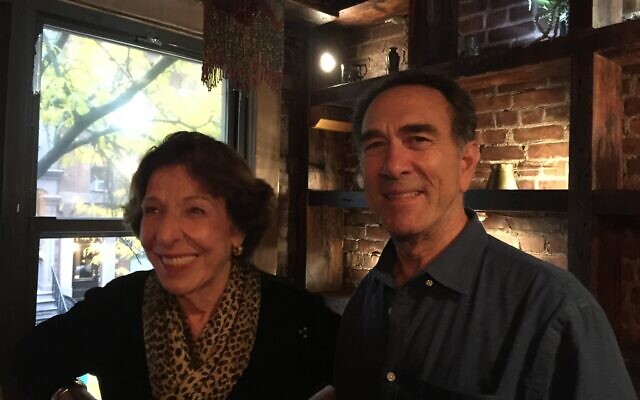 Speaking about the Jewish Quarter in Rhodes (Juderias in Ladino) — which Levi paused to clarify was not a “ghetto” — she explained how it was the same area, the same buildings in some cases, from “the time of the Knights of St. John,” also known as the Crusader Knights Hospitaller. She cited the medieval Rabbi Benjamin of Tudela’s report that a community of 400 Jews lived in Rhodes in 1165, which he claimed was a larger Jewish population than lived in Jerusalem at that time.

Levi said that by her time, “everyone knew one another. Sure, there were classes, but it was all one.”

She lives near Washington Square Park now, so the location of this exhibit means Levi will be there quite a bit. The area is synonymous with New York University and a young population. Concerning intergenerational conversation, she references the name of the installation, “The Hearts Speak.” 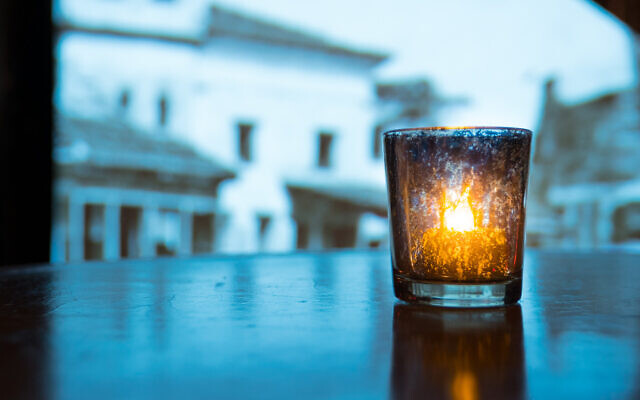 A candle in front of an image of Rhodes at the exhibition, ‘The Hearts Speak,’ October 29, 2019. (Isaak Liptzin/ Awen Films)

“This is something my mother and grandmother used to say. It means people will always respond to one another if they are open,” she said.

She admitted she likes chatting with the young people of the area, but chuckled, “I don’t know how much they like to hear from me!”