By Judith Monachina for The Oral History Center

Last weekend, I attended an event sponsored by the Centro Primo Levi, in NYC.  The event was held in a bar on W. 4th Street. It was a place that evoked another era in Greenwich Village.  No one was smoking, but the smoke of other eras seem to hang in the air as one man read from Finnegan’s Wake, in four languages. We were all invited to read poetry.  Natalia Indrimi read medieval poems, of woman and love, and loss.  I read a couple of contemporary American poems, including Emma Lazarus’, the New Colossus, because I believed the main character of the first line was in Rhodes (“Not like the brazen giant of Greek fame…..”) Meanwhile, on the brick walls, images of the Island of Rhodes showed water, houses, lace. 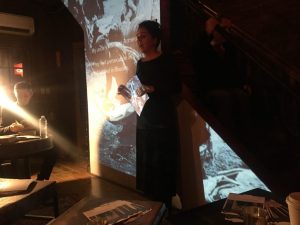 Then, we were invited up a wooden set of steps to a second floor, with a long luxurious bar. On the bar, nut and honey filled sweets laid out in a circular pattern, and chai tea.  In the room, images from the island of Rhodes, one young girl’s story there, projected to the brick walls, perfectly fitting into bookcase size shelves.  A device on a school desk served to project the images.  We mingled over the nutty sweets that would have been typical of Rhodes, goodies that Stella Levi, the Holocaust survivor whose stories projected on the walls,  had taught someone else to make.

Why Rhodes?  The island off the coast of Turkey, now Greek, once, for a short time Italian, was also the home of Stella Levi, and generations of Jews for centuries.  Centro Primo Levi does a lot to tell the stories of the Holocaust – the Shoah – in Italy, but also the stories of rich Italian Jewish culture. In this case, we experienced both.

It gave me an idea.  Please look forward to this sort of multimedia, casual, evocative, and even pleasurable event during this coming winter:  when we need it!