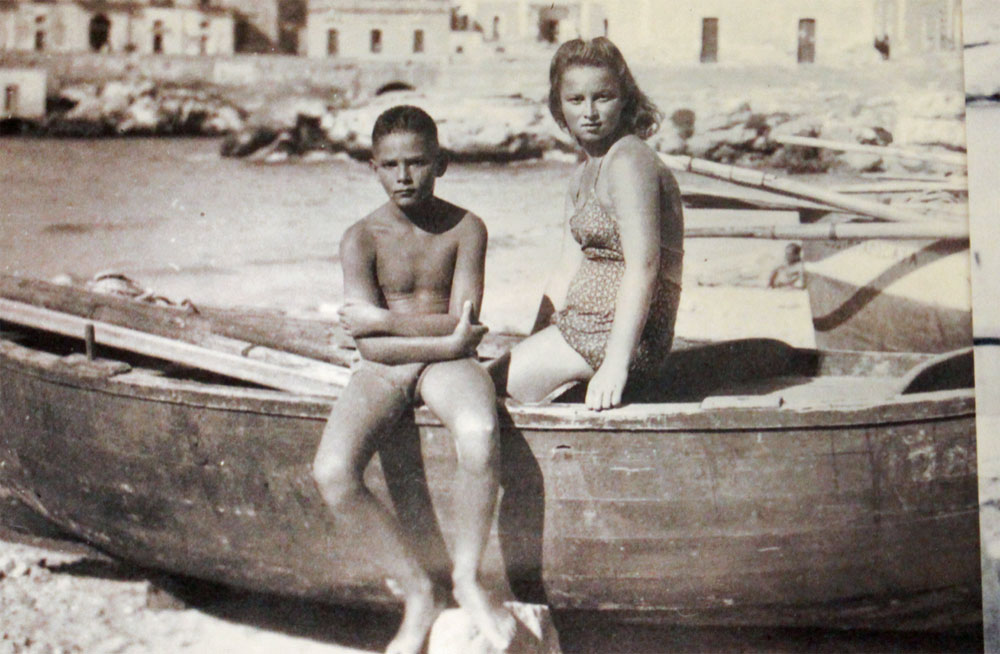 The  of  section UNRRA archive about refugees in Italy is filled with hundreds of thousands of documents. These give us a glimpse of the men and women who worked in the DP camps: besides the American staff, they were DPs and locals who constituted UNRRA’s labor force. Their work was compensated in money or in kind and was part of UNRRA’s strategy to create a degree of stability in small transient entities that were suspended outside sovereign rule.

The camps at Santa Maria di Leuca, in Puglia, were set up weeks after the creation of UNRRA by President Roosvelt and the allied nations. UNRRA’s staff looked upon this camp as a platform to streamline protocols and train staff. In the words of an UNRRA supervisor, it was an experiment: “The British did what they could, but with real honest-to-God American methods, supplies, transport, and ingenuity – a remarkable job can be done here.”

In the end, the experiment was short-lived, closing at the beginning of 1947, about 4 years before the closing of the last DP camp in Italy.

Many refugees cherish a positive and lasting memory of the camp and its magnificent setting in resort homes requisitioned by the Allied army. So does the local population that, after years of dire deprivation, welcomed the arrival of the Allies. For them too, it meant food, jobs, clothing, and medical care. Uplifting images of youth bathing in the sunny harbor, newly wed couples, newborn babies, students at school or at a workshop remain as iconic representations of the camp.

What do we do today with these uplifting images? What do we imply when we attribute to them meanings that exceed the reality of that moment and of those men and women?

While this is an open question for historians and for anyone concerned with the use of the past, it is important to remember that an image hides as much as it tells, exactly as our memories are propelled largely by things forgotten.

A memo by Ladislav Lang, a Jewish refugee who worked as mail clerk in the camp unit of Tricase, reveals other facets of the story. We are in 1946 a watershed moment for refugees in Italy. The camp opened 15 months before the end of the war. The first few hundred refugees arrived in Southern Puglia from nearby liberated areas only a few weeks after, 150 miles north, Mussolini’s police forces, voluntary militia, and the Germans had began the arrest and deportation of Jews throughout the peninsula.

It was not until the summer of 1945 that a substantial flow of refugees began to reach Santa Maria di Leuca, bringing the Jewish population of the camp to a peak of 2,600 people out of a total average of 5,500 including Yugoslav partisans, Albanians and other refugees from the war. The year that followed remained fixed in these mementos. By the summer of 1946 however, the situation of Jewish refugees became more critical. As Italian authorities announced the closing of the camp, anxiety soared: refugees felt trapped in a limbo, saw doors closed, and feared forced transfer to other DP camps or their countries of origin.

As the memo explains and as we learn from visa applications, a large portion of the refugees sought to emigrate to the US. However quotas were filled and only a small number of visas were granted. After the 1946 elections and the general amnesty, Italy reacquired almost full sovereignty, having negotiated favorable conditions even as a losing party in the war. Reconstruction began under the aegis of the De Gasperi government, President Truman and America’s paramount anti-Soviet effort.

While in the early period of the camp, the Italian authorities had hardly any involvement in the question of refugees, with the new setting, they began campaigning to close DP camps across the country; and enforce repatriation and expulsion of refugees. Italian government memos to UNRRA express the preoccupation that a large number of stateless people could remain in the country. Although Jewish refugees were only 35,000 of nearly a million displaced foreigners and Italians, many of them were stateless and the majority was from Poland, a country where they could not nor want, to return.

For most of the 2,600 refugees of Santa Maria di Leuca, the perilous voyage to British controlled-Palestine was the only option. Their suspended  existence within the cracks of national sovereignty, and lack of recognition as human beings in the world order of statehood, is what these images do not tell and in fact hide.

In the end, the camps in Southern Puglia were shut down amidst the refugees’ protest and the hostility of the Italian authorities. By the fall of 1946, incidents in northern Italian camps in which Jewish refugees were accused of communist conspiracy and the Irgun’s bombing of the British embassy in Rome, were taken by the press as opportunities to represent refugees as “terrorists,” “spies,” and a source of outside danger and unrest. Through measures that ranged from repressive to “humanitarian” the political class consistently pursued one goal: to rid Italy of refugees. This process inevitably took shape within the larger horizon of the decline of Europe’s colonial rule, the redesigning of the Middle East and the creation of the State of Israel.

These circumstances should not take anything away from the human connections that flourished among refugees, and between the refugees and the locals, nor from the positive feelings of women, men, and young adults, who survived unimaginable violence and hardship before landing in this place of natural beauty and serenity. If anything, they should be a way for others who did not have any comparable experience, to try to relate to what it means to be grateful to life and what the price of that possibility often is.

However, when we add meaning to these images and make them emblems of rebirth and triumph inscribing them into any national epic, we do not simply express owe and empathy towards the refugees of 70 years ago. We also make a statement on the present and eschew the fact that their condition is not specific to this or that people but is one that perpetuates itself, in larger and most brutal forms, as if it were an inevitable byproduct of victory and prosperity. It is possible that, in the future, we will begin to rethink these values and make sure that the meanings we attach to them do not make us complacent toward those very aspects of our world that we purport to change.

Fascism and the Police

Jonathan Dunnage, The Italian Police and the Rise of Fascism, Cambridge University Press, 1998 Based on research using official documents, this account of the role of…