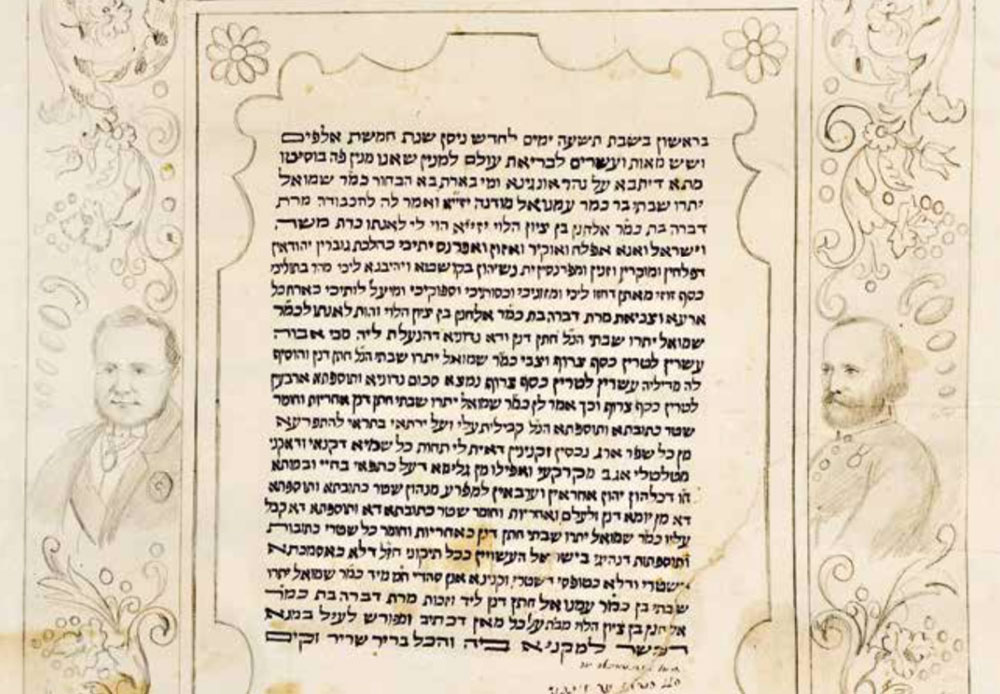 The National Museum of Italian Judaism and the Shoah opened its third exhibition entitled Beyond the Ghetto. Inside Out curated by Andreina Contessa, Simonetta Della Seta, Carlotta Ferrara degli Uberti, and Sharon Reichel. Image: Ketubah inscribed with figures of the Risorgimento. “Fausto Levi” Museum and Synagogue, Soragna.

We are pleased to publish en excerpt of one of the essays in the catalogue by Carlotta Ferrara Degli Uberti.

The subtitle of this exhibition, Inside&Out, evokes a spatial dimension but also a cultural and identity-forming one. Jews moved physically inside and outside the ghetto walls and beyond the confines of the pre-unification states, and this movement was accompanied by the circulation of both material (texts, objects) and immaterial production (ideas, performances, stories, superstitions). Identity, elusive and changeable, is perhaps the most difficult variable to analyze, since intrinsically plural and ambivalent, even when we try to give it a firm definition. Indeed, we are all made up of so many things, and in today’s world there is a growing trend to emphasize the value of these different aspects and attribute positive value to choice. Gender, ethnic, national, religious and political identities are decreasingly tied to a presumed material objectively and increasingly linked to the self-presentation of the single individual. The nineteenth century preferred clearer definitions, at least at the level of rhetoric and imagination, since practice is always more complex and multifaceted than theory. It can be described as the century of the idea of nation and of nationalism, although various empires did continue to prosper alongside the birth and development of nation states. This essay explores the intertwining of the Risorgimento, the construction of the Italian nation and the emancipation of the Jews.

The term “emancipation” indicates the attainment of the freedom to act independently, without being subject to a master, in the case of slaves, parents, in the case of children and a husband, in the case of married women. It indicates release from a minority state. Here, we can identify a dual significance. On the one hand, liberty is bestowed upon/granted to the emancipated person. On the other hand, this only happens when a higher authority has determined that an individual or group is worthy of enjoying liberty. In the case of the Jews, this term is usually used to designate the attainment of full equal standing before the law in terms of enjoyment of civil and political rights. The nineteenth century is sometimes described as the century of the emancipation of the minorities (Catholics in the United Kingdom, Protestants in Catholic countries, serfs in Russia, Jews a bit in all directions). As explained by David Sorkin, emancipation is not a single moment but a process, and it is subject to explicit and implicit negotiations over time. Further, it can be partially or fully revoked (Sorkin 2019).

How many, and where
“Italy” is of course too imprecise an indication to be used here without further comment. We shall therefore note what the Italian Peninsula was at the time, where the main Jewish communities were located and the regime to which they were subject. Our first consideration concerns the overall numeric magnitude of Italian Jewry or, as many have argued, Italian Jewries. It is a very small minority, oscillating between 30 and 40,000 individuals between the end of the eighteenth century and today, but distributed very unevenly across the territory. In 1800, there were 34,300 Jews (out of 18 million) resident in the area contained within the Italian borders as they are today, a number that climbed to 43,100 (out of nearly 34 million) in 1900 and then went down to 28,000 (out of just over 45 million) in 1945, as a result of the Shoah. At the end of the eighteenth century, the regions with the largest number of Jews, in absolute terms, were Tuscany, Piedmont, Emilia-Romagna, Friuli-Venezia Giulia, the Veneto and Lazio. There had been almost no Jews south of Rome since the expulsions between 1492 and 1541. Naples again became home to a Jewish community in 1863, through the good offices of the Rothschild family, which inaugurated a branch of its bank there in 1831, opening the way for the return of a number of individuals and families.

Rome has always been at the top of the list of the largest Jewish communities, but the other slots have varied radically. The geography of Italian Jewry changed considerably during the nineteenth century and the first half of the twentieth century, and it is clear that internal migrations were influenced by the political and economic development of the various regions and cities. Two examples will suffice to get an idea of the magnitude of the transformations. In the middle of the nineteenth century, Livorno still occupied second place, with 4,771 Jews registered in the Tuscan census of 1841, while Milan was of utter irrelevance that same year (Luzzati 1986).

In the subsequent decades, however, Livorno suffered considerable economic and demographic decline, linked to the reduced importance of its port’s economic activity within the new institutional and political framework of unified Italy. The exodus of its entrepreneurs, bankers, merchants and professionals in favor of Florence, Rome and other growing cities was gradual, but it had a profound impact on the city. Milan, on the contrary, slowly became one of the beating hearts of the new state’s economic and cultural life, and as the city developed, so did its Jewish community. Its growing importance is also reflected in the current situation (Maifreda 2000).

The Jewish communities scattered across the peninsula were subject to different legal systems, but they had at least one thing in common: they operated as intermediaries between individuals and the state authorities, following a practice typical of the old regime that was not limited solely to Jews. The modern idea of equality, in fact, could not be applied to that political and legal system: indeed, all subjects were placed in categories, groups and bodies that determined their rights, duties and social status (and vice versa); all were un-equal.

A New Attraction at the Jewish Museum of Rome: A Virtual Tour of the Ghetto in the Middle Ages. Pope Paul created the ghetto in 1555 to keep the Jews…