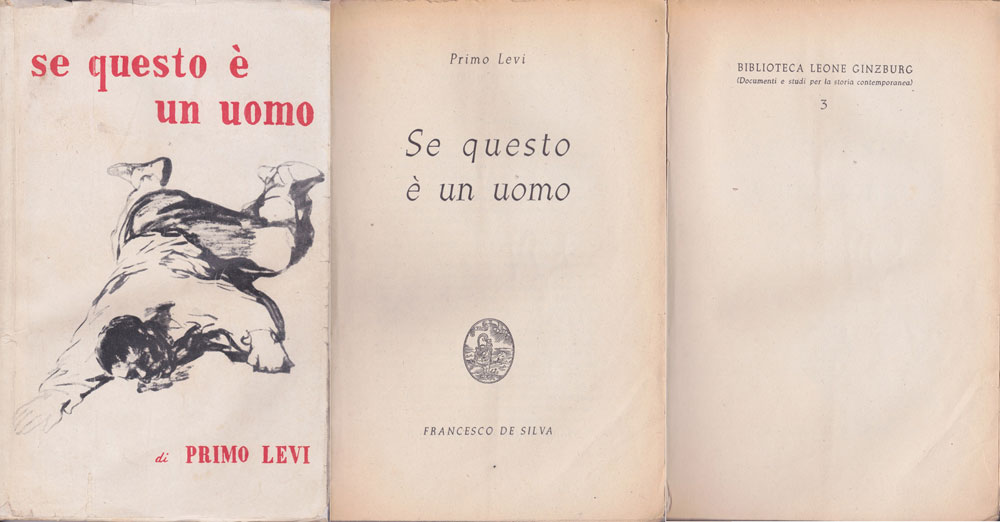 Centro Primo Levi, has recently received a wonderful gift: a rare first edition of Primo Levi’s Se  Questo è un uomo ( If This Is a Man) , published by Francesco De Silva, in Turin, in 1947. We are thrilled to have this precious volume ( which we will make available to scholars for consultation) and would like to thank Giorgio Van Straten for his generosity. For us  his gift has many dimensions: a tangible one — the physical object—  and symbolically one —  a last token of his friendship— sealing what been a most fruitful collaboration during his tenure as Director of the Italian Cultural Institute in New York between 2015 and 2019.

First editions exert a profound fascination and interest, not only on bibliophiles.  There are many reasons for this but mainly, as in the case of this edition of Se questo è un uomo,  because a first edition is the physical manifestation of a particular moment in the life of a book and reflects a significant time in the broader culture.

A first edition attests to a collaboration, and sometimes a tension, between author and publisher on many issues: the title, cover, occasionally an introduction or a graphic layout. Writers often participate in the production of the first edition. They may insist on corrections, additions  or cuts , up to the last minute.

Further, a cover or the book design of a series, often remains etched  in  our collective memory, prompting references to a specific time and place.

A brief recapitulation of this first edition. Primo Levi, completed the manuscript of If This is A Man, on  December 22, 1946. After careful revisions, he began to contact publishers by January of the 1947. Much to his disappointment the book was rejected by Einaudi, and subsequently by five other publishing houses (as documented by Ian Thomson  in A life, Primo Levi).

Eventually, on Alessandro Galante Garrone’s suggestion, the manuscript was brought to the attention of Franco Antonicelli, who after having lead Piedmont’s National Committee for Liberation, had started a small press called  Francesco De Silva (after a fifteen’s century Piedmontese printer). Antonicelli agreed to the publication and choose the title, from a verse in the opening poem. The book was on sale from October 11th, 1947, with a reproduction of an etching by Francisco Goya on the cover. Antonicelli  (De Silva) had made a first edition of 3000 copies, of which about half were sold, despite little critical attention. Only two reviewers, Italo Calvino and  Arrigo Cajumi, recognized the greatness of the work, at that stage.

Later, the unsold copies of all of De Silva’s catalog were purchased by La Nuova Italia, a publisher in Florence. In  1958, reversing its initial decision, Einaudi picked up the now out of print Se questo è un uomo, and released a new edition. (For a close analysis of the differences in the De Silva and the Einaudi edition, see Opere complete, ed. Marco Belpoliti in collaboration with Centro Internazionale di Studi Primo Levi).

As the new Einaudi edition, was gaining traction with readers and critics, the unsold copies of the De Silva edition, were destroyed in the  flood that devastated Florence in 1966.

It is an honor for Centro Primo Levi to now own a precious copy of the De Siva edition of Levi’s seminal work.

Michael Ebner, Ordinary Violence in Mussolini’s Italy, Cambridge University Press, 2010 Between 1926 and 1943, the Fascist regime arrested thousands of Italians and deported them to…