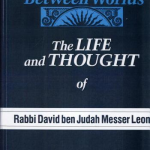 Hava Tirosh-Samuelson
Hava Tirosh-Samuelson is Director, Jewish Studies Program, College of Liberal Arts and Sciences at the Arizona State University. She writes on Jewish intellectual history with a focus on philosophy and mysticism in premodern Judaism, feminism and Jewish philosophy, Judaism and ecology, Jewish bioethics and Judaism and science. Dr. Tirosh-Samuleson is the organizer of the Templeton Research Lectures for Constructive Relations of Religion and Science (500,000) 2006-09 for the project: “Facing the Challenges of Transhumanism: Religion, Science and Technology.” She is currently editing Judaism and the Phenomenon of Life: the Legacy of Hans Jonas (Brill Academic Publishers) and working on Judaism and Nature (Rowman & Littlefield)

He was educated at Naples in the school of his father, Judah Messer Leon, author of Libnat ha-Sappir, and received at the age of eighteen his rabbinical diploma from German and French Talmudic authorities. Soon afterward he went to Padua, where he studied under Judah Minz, who granted him a new rabbinical diploma. After further studies in Florence, he returned to Naples in 1492, where he practised as a physician and taught in his father’s academy. However, in 1495 the city fell to the French under Charles VIII, and he fled east to the Ottoman Empire to escape the violent pogroms that ensued, spending time in Istanbul before moving sometime between 1498 and 1504 to teach Torah in Salonica, at that time in a state of intellectual vibrancy due to the settlement there of many Sephardi exiles forced to leave after the expulsion of the Jews from Spain in 1492, Sicily in 1493, and Portugal in 1496.