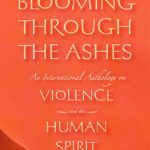 Clifford Chanin and Aili McConnon, Blooming Through the Ashes: An International Anthology of Violence and the Human Spirit, Rutgers University Press, 2008

The twentieth century is frequently characterized in terms of its unprecedented levels of bloodshed. More human beings were killed or allowed to die by human cause than ever before in history. The impact of the century’s carnage does not end at the lives that were taken; the atrocities continue to take their toll on those who survived, on those who bore witness, and on succeeding generations.

Blooming through the Ashes features writings about this historic violence and its aftermath in a global anthology that brings together the work of Nobel laureates Seamus Heaney, Toni Morrison, Czeslaw Milosz, Wole Soyinka, Elie Wiesel, Imre Kertesz, Alexandr Solzhenitsyn, Eugenio Montale, and Pablo Neruda. In non-fiction and fiction, these writers and others reflect on the litany of man-made violence that marred the twentieth century and that shadows the twenty-first: including the Holocaust, the Gulag, the Cultural Revolution, apartheid, repression in Latin America, genocides in Rwanda, Cambodia, and 9/11.

Essays on Ancient and Modern Judaism

Arnaldo Momigliano, Essays on Ancient and Modern Judaism, University Of Chicago Press, 1994 Arnaldo Momigliano (1908-87) was one of the most distinguished twentieth-century scholars of the…