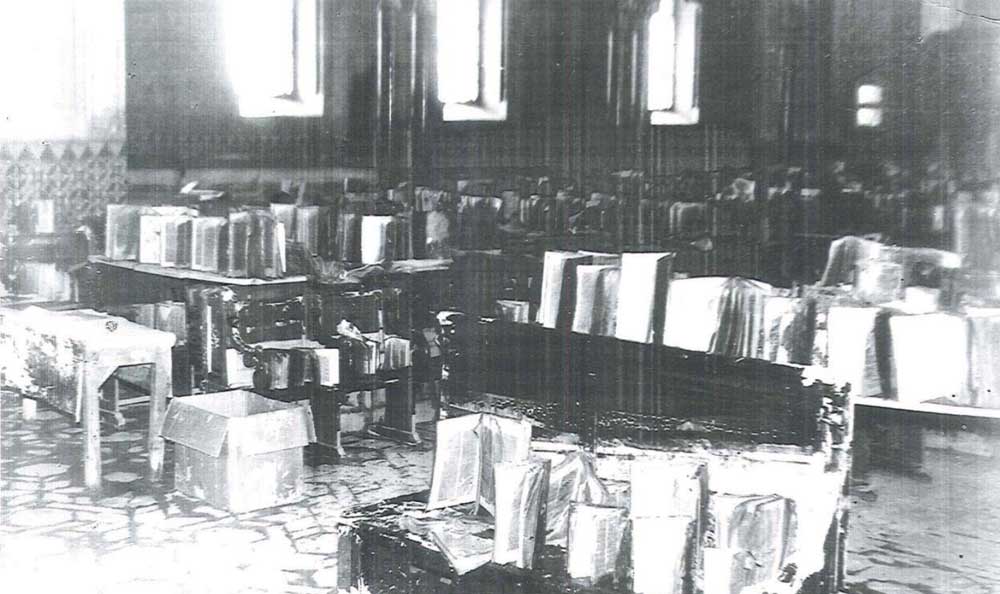 An exquisite exhibition at the National Library of Florence celebrates the return of some of the books from the Florence synagogue that were damaged in the 1966 flood and were recently restored thanks to a project of the Italian National Foundation for Jewish Heritage.

After the flood, along with local and international contingents of generous civilians from all walks of life, many came to the rescue of the Jewish library. Almost 100 sefarim were lost. The salvaged volumes were sent to the Jewish Bibliographic Center in Rome with the plan to preserve them. They included 15,000 volumes from the Rabbinical College, 555 “cinquecentine”, hundreds of manuscripts and communal records, a precious testimony of centuries of Jewish life in Tuscany.

However, for most of the volumes preservation work was delayed for decades. It was not until the past few years that the Jewish Community of Florence jointly with the National Jewish Heritage Foundation and Florence National Library took on a massive restoration project, bringing back to life, as well as to the community, some of the most beautiful volumes of the Florence Jewish Library collection.

On November 3-4, 1966 the Arno river flooded its banks, killing over 100 people and burying damaging thousands of historical treasures including works of art, books, manuscripts and monuments.

The first recorded flood of the Arno River occurred in 1177, when Ponte Vecchio, at that time the only bridge crossing the river in Florence, was flooded and damaged. On 4 November 1333, a large flood inundated Florence, Ponte Vecchio was destroyed and about 300 lives were lost. During the Renaissance Period, due to the development of the city of Florence and the marked modification in land use, the increase in flood frequency produced many scientific observations by physicists and architects, and various hypotheses were put forward regarding channel evolution, debris transport and land use effects on flood frequency.

Between 1500 and 1510, Leonardo da Vinci submitted a few projects for a complex diversion of the Arno involving a large retention basin, a sewage system and some diversion channels to control the river, but his projects were ignored. Around 1545, another great artist, Michelangelo, addressed the high flood hazard in the Santa Croce district.