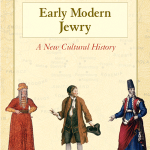 David B. Ruderman
David B. Ruderman is the Joseph Meyerhoff Professor of Modern Jewish History and the Ella Darivoff Director of the Herbert D. Katz Center for Advanced Judaic Studies at the University of Pennsylvania. His many books include Jewish Enlightenment in an English Key and Connecting the Covenants.
Early Modern Jewry boldly offers a new history of the early modern Jewish experience. From Krakow and Venice to Amsterdam and Smyrna, David Ruderman examines the historical and cultural factors unique to Jewish communities throughout Europe, and how these distinctions played out amidst the rest of society. Looking at how Jewish settlements in the early modern period were linked to one another in fascinating ways, he shows how Jews were communicating with each other and were more aware of their economic, social, and religious connections than ever before.

Ruderman explores five crucial and powerful characteristics uniting Jewish communities: a mobility leading to enhanced contacts between Jews of differing backgrounds, traditions, and languages, as well as between Jews and non-Jews; a heightened sense of communal cohesion throughout all Jewish settlements that revealed the rising power of lay oligarchies; a knowledge explosion brought about by the printing press, the growing interest in Jewish books by Christian readers, an expanded curriculum of Jewish learning, and the entrance of Jewish elites into universities; a crisis of rabbinic authority expressed through active messianism, mystical prophecy, radical enthusiasm, and heresy; and the blurring of religious identities, impacting such groups as conversos, Sabbateans, individual converts to Christianity, and Christian Hebraists.

Adam Kirsch on Tablet, On the Move. A new book assesses the Jewish world at the dawn of the modern age

With the title of his new survey, Early Modern Jewry: A New Cultural History, David B. Ruderman plunges into one of the central debates in the writing of Jewish history. For the most of the last 2,000 years, Jews lived as a small minority among much larger and more powerful civilizations. When we think of the history of Europe, it is in terms derived from the experience of Christians and Christianity: the Dark Ages, after the fall of Rome; the Middle Ages, when Catholicism sponsored a new European order; the Renaissance and Reformation, when the power of the Church faltered under pressure from Protestantism and the new sciences; and the modern period, as Europe became increasingly secular, urban, and industrial.

But does this familiar timeline apply to the history of the Jews? Was the Jewish experience determined by the same events that were shaping Europe as a whole, or does Jewish history have its own logic, which would require a different set of historical divisions? To take an obvious example: In European history, 1492 means the discovery of America, an event full of promise; in Jewish history, it means the expulsion from Spain, a great national trauma. Yet these two epoch-making events cannot be strictly separated. Both contributed to the unprecedented migration of peoples in the 16th century; indeed, many Jews who left Spain in 1492 ended up in the New World as merchants or settlers.

The term “early modern” has long been used to describe the period spanning the years 1500 to 1800 in Western Europe—it is a broader and more neutral-sounding term for what used to be called the Renaissance. Now Ruderman argues that, in the same years, the Jews experienced a cultural crisis equivalent to, though not quite the same as, what their Christian neighbors were undergoing. “The history of Jewish society and culture in early modern Europe is more than a mirror of the Christian world,” Ruderman writes. What’s more, it is possible to generalize about the experience of Jews across the Continent, to write not merely “a Jewish history specific to a Polish context or an Italian or Ottoman one but a history of the Jews and their cultural legacy as a whole.”

What are the defining traits of this early modern period that make it more than “a mere transitional stage between medievalism and modernity”? Ruderman, a professor of Jewish history at the University of Pennsylvania, proposes five key “elements” or “markers” and devotes one chapter of this short book to each of them. First, and in some ways most fundamental, is that Jews after 1492 were unprecedentedly mobile (the title of Ruderman’s first chapter is “Jews on the Move”). Hundreds of thousands of Jews left Spain and Portugal for the Ottoman Empire and the city-states of Italy, where they were discriminated against but enjoyed a certain amount of official protection. At around the same time, a mass migration of Ashkenazi Jews from Germany and France into Eastern Europe created what would become the heartland of European Jewish life, in Poland, Lithuania, and the Ukraine.

For all the differences between Ashkenazi and Sephardic Jews, Ruderman observes that these two migrations followed the same broad pattern. Each group brought to its new territory an old language (Yiddish and Ladino), as well as old forms of communal self-government and ritual practice. And in the East and South alike, Jews occupied similar economic niches, “serving the interest of monarchy and nobility” by performing services like “lease management, tax farming, and customs supervision,” as well as commerce and money-lending. Ruderman also notes that there was a surprising amount of communication between Ashkenazim and Sephardim, with Amsterdam serving as a hub for travelers in both directions.

This newfound mobility can be seen in Ruderman’s biographical catalog of early modern Jewish luminaries. Joseph Karo, the compiler of the legal compendium known as the Shulhan Arukh, was born in Iberia in the late 15th century, moved to Istanbul as a child, then lived in various places in European Turkey, Greece, Egypt, and Palestine. Joseph Delmedigo, a 17th-century kabbalist and astronomer, moved from Crete to Padua to Cairo to Vilna to Amsterdam to Prague—a Cook’s Tour of early modern Jewry. Ruderman suggests that such men performed a kind of cultural crosspollination, which resulted in “the emergence of new forms of literary creativity in law, kabbalah, belles letters, medicine, history” and other genres, and may be related to “the concentration of Jews in itinerant professions such as medicine, the performing arts, the rabbinate, and trade.”

If Jews were on the move in the early modern period, so were Jewish books. The Gutenberg era famously produced a cultural revolution in Christian Europe; for Jews too, Ruderman writes, print was responsible for a “knowledge explosion,” which changed the way Jews communicated and thought about their traditions. Before the late 15th century, rabbinic works were “learned orally and transmitted through hagahot (glosses) written by a later exegete that eventually merged with the original text itself as they were studied, transmitted, and recopied.” This meant that the corpus of Jewish law stayed fluid, with many local variations, and that each rabbi had great authority to interpret the text.

But in 1580, in Krakow, Moses Isserles published an edition of Karo’s Shulhan Arukh with his own glosses included. This not only merged Sephardic and Ashkenazi customs (Karo was from Spain, Isserles from Poland), it heralded “the obliteration of localized oral traditions of authority and transmission.” In the age of print, “the text—not the teacher—became the ultimate word.” Reading was democratized, as rabbis “proved incapable of controlling the outpouring of small books and pamphlets quickly and inexpensively produced for a lay public [that] exposed them to aspects of a tradition that had once been the exclusive prerogative of highly educated legal scholars.” In this way, print helped undermine clerical power in the Jewish world, as it was also doing more dramatically in the Protestant Reformation.

Rabbinical authority was simultaneously being challenged on two other fronts. The early modern period saw the lay leaders of Jewish communities begin to exercise more power over rabbis. Parnassim, as the community elders were called, came from wealthy and prestigious families, and they were increasingly unwilling to let clergy tell them how to run things. In 1670, the parnassim of Leghorn (Livorno) issued a declaration that “on matters pertaining to religious law—marriage and divorce, dietary laws, and other ritual matters—[they] might consult the rabbis for their expert opinions but ultimately they had the sole prerogative” to make legal rulings. This led Jacob Sasportas, a leading rabbi, to denounce them: “their aspiration and desire is to cast away … and dismiss anything that bespeaks the honor of the hakhamim [the sages—that is, the rabbis], to deprive them of all authority and lower them to the dust to be trampled on by the laity.”

Such internal battles—and Ruderman finds similar ones from Amsterdam to Lublin—reflected a Jewish society in the throes of change. So too, even more dramatically, did the heretical movements of Sabbatai Zevi in Turkey and Jacob Frank in Poland. These false messiahs preached a radical challenge to normative Judaism, turning all laws and ethics upside down and even encouraging their followers to convert to Islam and Christianity. It was in opposition to such movements, Ruderman proposes, that Orthodox Judaism was born, as rabbis began to self-consciously unite to buttress their own authority and clamp down on innovation.

In this way, as in many others, developments that we think of as belonging to a later phase of Jewish history—the modern era, starting with the Enlightenment or Haskalah of the late 18th century—can actually be traced to the early modern period. “In aligning the early modern with the modern,” Ruderman concludes, “[and] carefully tracing the evolution of one to the other … the myth of a radical modernity itself is called into question.” Early Modern Jewry will certainly help to shape future debates over the ways we write and interpret Jewish history.

The Vatican and the Anti-Jewish Persecution