Application details
Papers should not exceed 20 minutes. When submitting a proposal, please include a 300-word abstract explaining the presentation’s central questions, its innovations, and the sources upon which it is based, along with a current CV. Doctoral candidates are encouraged to apply. Please send the proposals to  italianjewsNYC2015@gmail.com by March 21, 2014. Francesca Bregoli (Queens College-CUNY) Carlotta Ferrara degli Uberti (University of Pisa/Hadassah-Brandeis Institute) Guri Schwarz (University of Pisa/UCLA)

The CUNY Graduate Center and the Columbia University Institute for Israel and Jewish Studies invite proposals for papers to be presented at a conference featuring new research on early modern and modern Italian Jewish life in relation to and in dialogue with the larger context of Mediterranean, European, and American Jewish history. 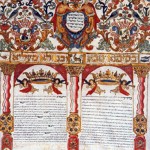 The conference will take place in March 2015.
This conference seeks to move beyond the dichotomy of “exceptionality” and “representativeness” engrained in much of the historiography on Italian Jewry, which views this minority either as an extraordinary case apart from the better known Sephardi and Ashkenazi examples or as a model of general Jewish history on a small scale.
Accordingly, the conference aims to showcase original research that situates the Italian Jewish experience within a trans-regional and trans-national context and that is mindful of the complex, and at times conflicting, set of networks, relations, and loyalties that characterized diasporic life from the 16th to the 20th century.
We welcome proposals focusing on the early modern and modern periods. Proposals may address, but are not limited to, the following topics:
·        Forms of connection and cooperation between Italian Jewish communal institutions and foreign or international Jewish bodies.
·        The history of Italian merchant families and business firms and their economic networks.
·        International matrimonial strategies of Italian Jewish families, and their changes over time.
·        The circulation of ideas and texts, from Hebrew manuscripts to the interaction of the Italian Jewish periodical press with other European-Jewish periodicals.
·        The role of Italian rabbis engaged in international Jewish disputes and questions, including Sabbateanism, Wissenschaft des Judentums etc.
·        The relations between Italian Jews and Palestine, the introduction of Zionism in Italy, and the role played by Italy in the Alyah Beit.
·        The relations between Italian Jews and the state of Israel, as well as the relations between Italian Jews and American Judaism.

A New Issue of Telos: The Particularities of Fascist Anti-Semitism When we examine European anti-Semitism during the 1930s, and especially the Shoah, the case of Germany…