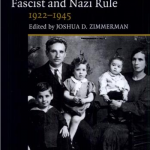 “Zimmerman’s edited collection offers a valuable overview of the new historical scholarship on the racial laws and the Shoah in Italy, as well as a good sampling of the works of some of the major contributors to this revisionist historiography.” – American Historical Review, David I. Kertzer, Brown University

This book brings to light the Italian-Jewish experience from the start of Mussolini’s Prime Ministership through the end of the Second World War. Challenging the myth of Italian benevolence during the fascist period, authors investigate the treatment of Jews by Italians during the Holocaust, and the native versus foreign roots of Italian fascist anti-Semitism. Essays collected in this volume each illustrate a different aspect of Italian Jewry under fascist and Nazi rule. Areas of inquiry include the role of the Catholic Church with special reference to Pope Pius XII, Mussolini’s attitude and anti-Jewish policies leading to the onset of the 1938 Italian racial laws, and the Italian popular reactions to anti-Jewish persecution. Included also is an examination of cover images and articles from the Italian racist newspaper La Difesa della Razza intended to lay bare the influence of the Italian media on the general Italian public.

Days of Holocaust Remembrance in the European Union