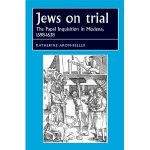 Jews on Trial concentrates on Inquisitorial activity during the period which historians have argued was the most active in the Inquisition’s history: the first forty years of the tribunal in Modena, from 1598 to 1638, the year of the Jews’ enclosure in the ghetto.

Scholars have in the past tended to group trials of Jews and conversos in Italy together. This book emphasizes the fundamental disparity in Inquisitorial procedure, as well as the evidence examined, and argues that this was especially true in Modena where the secular authority did not have the power during the period in question to reject, or even significantly monitor, Inquisitorial trial procedure. It draws upon the detailed testimony to be found in trial transcripts to analyzes Jewish interaction with Christian society in an early modern community.

This book will appeal to scholars of Inquisitorial Studies, social and cultural interaction in early modern Europe, Jewish Italian social history, and anti-Semitism.

January 27, Remembrance Day: ordinary Italians and genocide 1943-45 What is a genocide and how does it occur? This is a question that we Italians can…