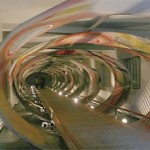 The Italian Memoria at Auschwitz
The memorial to the Italian Deportees was erected in Auschwitz in 1979, a result of the concerted efforts of architect Ludovico Belgiojoso, painter Pupino Samonà, composer Luigi Nono, writer Primo Levi and director Nelo Risi. Its state of disrepair raises questions on several fronts.

Memorialization of the Shoah and its possible expression through art have been stirring passionate debates over the past 40 years. The controversies, involving scholars, institutions and the general public, have spanned across many countries and ethnic groups.

Witnesses’ and survivors’ conceptual and aesthetic approaches toward memorials often diverge from those who experience what Marianne Hirsh has called “post-memory”, describing the ways post-Shoah generations access the experience of the witnesses, through mediation and imaginative reconstruction.

Italy’s most significant contribution in this field was the construction in 1979 of a memorial to the Italian Deportees, erected in Auschwitz by the concerted efforts of architect Ludovico Belgiojoso, painter Pupino Samonà, composer Luigi Nono, writer Primo Levi and director Nelo Risi. The result is a Gesamtkunstwerk of rare intensity that envelops the visitor into a space-time narration in which visual, text and musical elements aim at, in Levi words, “allowing a glimpse into the mindset of millions of human beings reduced to the state of slaves or animals about to be slaughtered”. Rather than engaging in didactic narration, the work solicits somber meditation and remembrance, and has been internationally recognized as a high example of interdisciplinary memorial artwork.

30 years after its construction, the Memoriale dei Deportati Italiani in Auschwitz is in a state of neglect and disrepair. The Italian Ministry of Cultural Affairs (Ministero per i Beni e le Attività Culturali) lamenting budget cuts, resists beginning a costly restoration in situ and suggests the risky and symbolically questionable solution of moving it to the former transfer camp of Fossoli, in Italy.

The Memoriale dei Deportati Italiani was conceived and funded by ANED, the National Deportes Association. The international cultural stature of its authors alone should justify its preservation.

Lodovico Barbiano Belgijoso was one of Italy’s leading late 20th century architects. He designed Holocaust memorials in Milano, Carpi and Gusen (Austria), as well as a memorial to the Italian women in Ravensbruck. He was also in charge of the preservation of the camp of Fossoli.

Belgiojoso himself was interned in Auschwitz for his antifascist activities. Though most Italian deportees were Jewish, Beljoioso and his collaborators chose not to differentiate the memory of those persecuted for racial or political reasons.

Today, with all of the Memorial’s authors gone, it becomes our collective responsibility to preserve their work.

Several other countries have constructed memorials to their exterminated citizens within the area of the former barracks in Auschwitz and it is each government’s responsibility to provide for their upkeep. Belgiojoso’s architectural spiral is indeed a fragile structure that should be declared part of the national patrimony. Given Italy’s wealth of historical and archeological treasure, there is little precedent for the conservation of a recent architectural structure. Yet if Italy’s government is unable or unwilling to finance a proper restoration, perhaps private founding should be sought in Italy and abroad.

Mediterranean Enlightenment: Livornese Jews, Tuscan Culture, and Eighteenth-Century Reform, Stanford University Press 2014 The Mediterranean port of Livorno was home to one of the most prominent and privileged Jewish enclaves of…