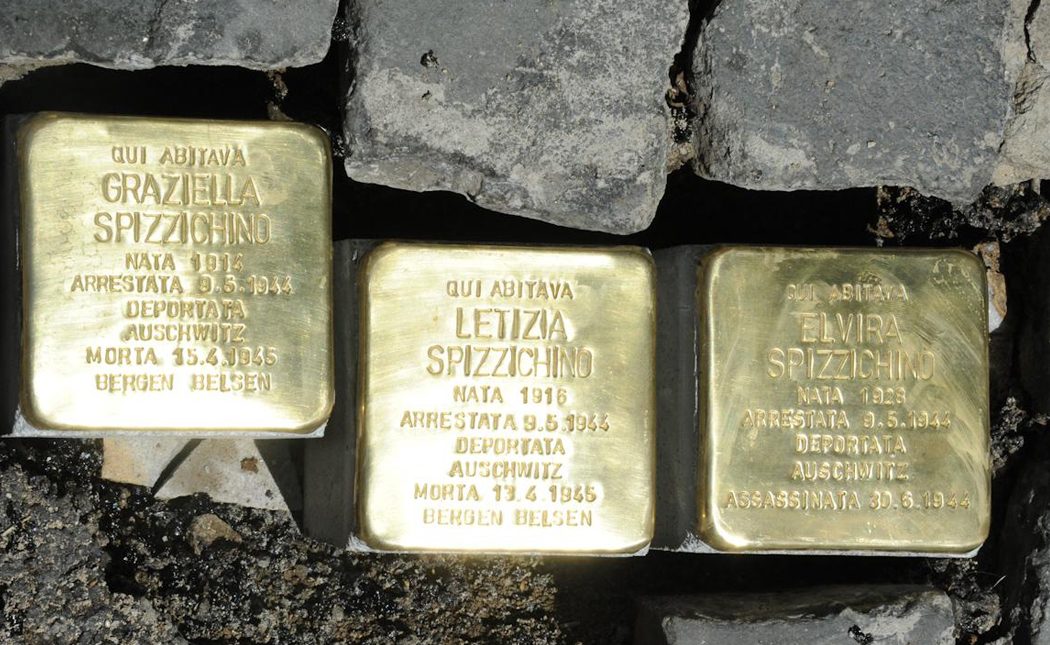 An architect and art historian, Adachiara Zevi itaught Art History at the Academy of Fine Arts in Macerata, Florence, Bologna, Milan, Palermo and Naples. In addition to catalogs and monographs on Italian and international contemporary artists, she is the author of Arte USA del Novecento (2000), Peripezie del dopoguerra nell’arte italiana (2006), L’Italia nei Wall Drawings di Sol Le Witt (2012). Since 2002 she has curated the International Biennial Art in Memory in the ruins of the Synagogue of Ostia Antica (2nd century c.e.). In 2010 she started in Italy Guenther Demnig’s project “Stumbling Stones”. She is president of the Foundation Bruno Zevi. She worked from 1987 to 2011 with the “Corriere della Sera”.

The title of this publication announces a short history of monuments “by defect”, but just what sort of defect are we speaking of? The lack of “monumentality”, if we employ this term to speak of specific prerogatives generally attributed to monuments: uniqueness, staticity, hierarchy, persistence, hypertrophic dimension, symmetry, centrality, rhetoric, indifference to place, aulic materials, eloquence and the expropriation of emotions.

This history is partial and non-exhaustive; it is not a survey that numbers and classifies monuments and memorials according to sites, subjects or intended users: since the 1990s the pioneering research of the American historian James Young has been followed by a galaxy of publications of great documentary and scientific value.

This history is not impartial, but sectarian; it does not even consider in the same way all the artistic and architectural creations. It prefers sobriety to redundancy, aphasia to eloquence, subtraction to emphasis, modernity to anachronism, individual responsibility to delegation: to quote Todorov, “exemplary” to “literal form”.

Published on the occasion of the 70th anniversary of the massacre of the Fosse Ardeatine, on 24 March 1944, this study seeks to bring attention to the monument commemorating this event, whose merits are so often ignored or underestimated even in Rome. Erected in memory of a brutal mass execution, a symbol of resistance against Nazi and Fascist oppression and the product of the first design competition of democratic Italy held in 1944, the mausoleum represents a new page in the lengthy history of monuments and memorials.

For the first time it offered not an object for contemplation, but a pathway to be travelled, a physical and emotional retracing of the victims’ last moments: the elements which compose the monument, namely the natural caves, the architectural space of the sacrarium and the tortured wrought iron gates by the artist Mirko, are not final destinations, but rather stops along a route.

This milestone, whose chorus of languages – figurative, abstract, informal, expressionist –revived the artistic and architectural debate interrupted by twenty years of Fascist obscurantism, was followed by three other exemplary cases of monuments “by defect”.

The Denkmal für die ermordeten Juden Europas, Memorial to the Murdered Jews of Europe, designed by Peter Eisenman in the heart of Berlin is the first: it records the decisive transformation of the monument from pathway to city fragment. Its 2,711 columns of differing heights and inclines establish an enormous deformed and slanting grid.

The Roman itinerary, in spite of its significant margins of manoeuvre, is substantially univocal and focuses on linking the monumental episodes of the gates, the caves, the sacrarium and the statue by Francesco Coccia.

In Berlin instead, visitors are free to choose from among 54 routes running north-south and 87 running east-west. Alone, devoid of any indications, privileged directions or perspective fulcrum, visitors are offered an experience that may seem logical and ordered in appearance, but proves destabilizing.

While the monument in Rome is enclosed and complete, the memorial in Berlin is forever open, like the rest of the city; visitors come across it unexpectedly while walking through the city centre and the Tiergarten.

Finally, unlike its Roman predecessor, Eisenman uses a single linguistic element: an abstract, undifferentiated grid extendable to infinity. In this decision to opt for a module and not a form, for temporal repetition rather than spatial composition, lies the uniqueness of the Berlin memorial with respect to other abstract results. It is aphasic, does not display what commemorates, but merely suggests a solitary and silent paths of memory.

Still, the most radical challenge came with the “counter-monument”, whose disappearance is inherent to its very conception. If the “absolute heart of this modern century” is the invisible, “destruction without ruin”, as Gerard Wajcman reflects, by rendering absence visible the “counter-monument” becomes its literal representation. It is no surprise that the idea originated in Germany, a nation called to commemorate the victims of its own crimes. Hence the oscillation between memory and oblivion, between the monument and its elimination.

The paradigm of “counter-monuments” is the Mahnmal gegen Faschismus (Monument against Fascism, War, Violence–and for Peace and Human Rights) by Jochen Gerz and Esther Shalev, inaugurated in Hamburg in 1986. The signatures or inscriptions (70,000) left by citizens on its ductile surface gradually, over the course of seven years, caused a lead column to disappear into the earth, transforming spectators of a monument to memory into the memory of the monument. Confiscated from the monument, memory becomes the living remembrance of the spectator who, through a signature/testimonial, becomes an accomplice to the artist in the realization/disappearance of the monument.

This solution was too radical to represent a point of arrival. It thus fell on the Stolpersteine, the “stumbling stones” conceived by the German artist Gunter Demnig, to indicate the means of consenting the “counter-monument” to proliferate and spread, to become, precisely, a “ubiquitous” Europe-wide monument: the most clamorous contravention of the unique, central and centripetal monument.

Without distinction, all victims of Nazism and Fascism between 1939 and 1945 are remembered by a small sign, a simple cobblestone that, naming and recounting their tragic destinies in an essential, discrete and succinct manner, serves two fundamental functions: restoring human dignity and offering families and citizens a place to remember all those “destroyed without ruins”, initially reduced to numbers and later to ashes or abandoned in mass graves. Not any place; not an aulic place for memory, but homes from which they were torn; the threshold between a normal life of affection and the abyss.

The Stolpersteine, stumbling stones, personalize history. They translate an abstract incommensurable statistic into millions of individual stories. Discrete and invisible until we “stumble” into them.

Each year on the 24 March official celebrations and commemorations take place in the square in front of the sacrarium of the Fosse Ardeatine hosting the rows of identical sepulchres: the names of the 355 victims are called out.

Since 2010, thanks to the “stumbling stones”, some of them have returned to their homes, to their neighbourhoods, to their parishes, to the schools where they served the mission of education. Exactly seventy years separate the monument from those stones: the period in history selected for this short and undoubtedly incomplete itinerary among monuments “by defect”.

As distant in time and space as the poetics that make them true, they demonstrate that art and architecture are precious tools for the creative, original and irreverent elaboration of history and memory, and an antidote to passivity and addiction.