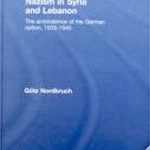 Götz Nordbruch
Götz Nordbruch is research associate at the IREMAM, Aix-en-Provence, France. His research interests include the history of Arab-European relations and the development of modern Arab political culture. He is currently working on Arab students in interwar Europe.

The increasingly vibrant political culture emerging in Lebanon and Syria in the 1930s and early 1940s is key to the understanding of local approaches towards the Nazi German regime. For many contemporary observers in Beirut and Damascus, Nazism not only posed a risk to Europe, but threatened to take root in Arab societies as well.

In the first publication to reconstruct Lebanese and Syrian encounters with Nazism in the context of an evolving local political culture and to base its analysis on a comprehensive review of Arab, French and German sources, Götz Nordbruch examines the reactions to the rise of Nazism in the countries under French mandate, spanning from fascination and endorsement to the creation of antifascist networks.

Against a background of public discourses, local politics and the shifting regional and international settings, this book interprets public assessments of and contact with the Nazi regime as part of an intellectual quest for orientation in the years between the break-up of the Ottoman Empire and national independence.

Risa Sodi, Millicent Marcus, New Reflections on Primo Levi: Before and After Auschwitz, Palgave McMillan, 2011 “It is usually said that the life of a writer…