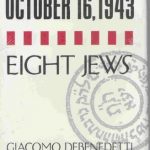 Debenedetti (1901-1967), one of Italy’s most influential literary critics, editors and literature professors, endangered his career championing unfashionable avant-garde writing by Umberto Saba, Italo Svevo and Marcel Proust. Gilson’s nuanced translation of this indispensable Holocaust document introduces U.S. readers to a formidable Jewish intellectual. Written in 1944, when the event was still an open wound, this charged, devastating account of the Nazi seizure of “the Pope’s Jews” was immediately recognized as a small masterpiece.

Citizens of the Eternal City for two millennia, the Roman Jews couldn’t believe that the rumored atrocities on the eastern front could occur there, in the heart of Christendom, so on October 15, they ignored a disreputable woman’s hysterical warnings. “Tragedy entered the stream of life and blended into it with such terrifying naturalness that from the first there was no room for anything, not even astonishment,” writes Debenedetti. Before deporting more than 1,000 Roman Jews (fewer than a dozen returned from Auschwitz), the Nazis extorted gold and seized the Jewish community’s magnificent libraries.

Gilson skillfully renders Debenedetti’s heartbreaking evocation of Rome’s mood that autumn. In Eight Jews, an essay written after the 1944 Nazi massacre of 335 men and boys in the Ardeatine Caves in reprisal for a partisan attack, Debenedetti provocatively argues that eight Jews originally on the list to be executed were removed for the wrong reasons. For Debenedetti, equality meant no special treatment, even as recompense for injustices. Gilson’s essay on the fate of the Jewish libraries and Alberto Moravia’s preface round out this short, immensely fertile book on the Holocaust in Italy.

“ October 16, 1943 is one of the finest accounts ever written about the massive German roundup of Jews in Rome on the date of its title. Debenedetti’s mastery of the facts, literary ability, and concern for the human dimension make this tragic event come alive in all its horror. His work is both a valuable contribution to the historical record and a moving tribute to the more than one thousand Jewish victims of a Nazi atrocity in the Eternal City.” —Susan Zuccotti, author of Under His Very Windows: The Vatican and the Holocaust in Italy, winner of the 2000 National Jewish Book Award for Jewish-Christian Relations.

For more than fifty years, Giacomo Debenedetti’s October 16, 1943 has been considered one of the best and most accurate accounts of the shockingly brief and efficient roundup of more than one thousand Roman Jews from the oldest Jewish community in Europe for the gas chambers of Auschwitz. Completed a year after the event, Debenedetti’s intimate details and vivid glimpses into the lives of the victims are especially poignant because Debenedetti himself was there to witness the event, which forced him and his entire family into hiding.

Eight Jews, the companion piece to October 16, 1943, was written in response to testimony about the Ardeatine Cave Massacres of March 24, 1944. In this essay, Debenedetti offers insights into that grisly horror and into assumptions about racial equality. Both of these stunning works are appearing together, along with Alberto Moravia’s preface to Debenedetti’s October 16, 1943, for the first time in an American translation. October 16, 1943/Eight Jews gives American readers a first glimpse into the extraordinary mind of the man who was Italy’s foremost critic of twentieth-century literature.

In addition to probing the deeper, haunting questions of the Holocaust, Debenedetti briefly describes the seizure of the Roman Jewish community’s library of early manuscripts and incunables, the most valuable Jewish library in all of Italy. Following the roundup, this library was never seen again. Award-winning translator Estelle Gilson offers an additional essay on the history of the library and modern-day attempts to locate it. October 16, 1943/Eight Jews is a moving work that will continue to challenge readers long after they have closed its pages.