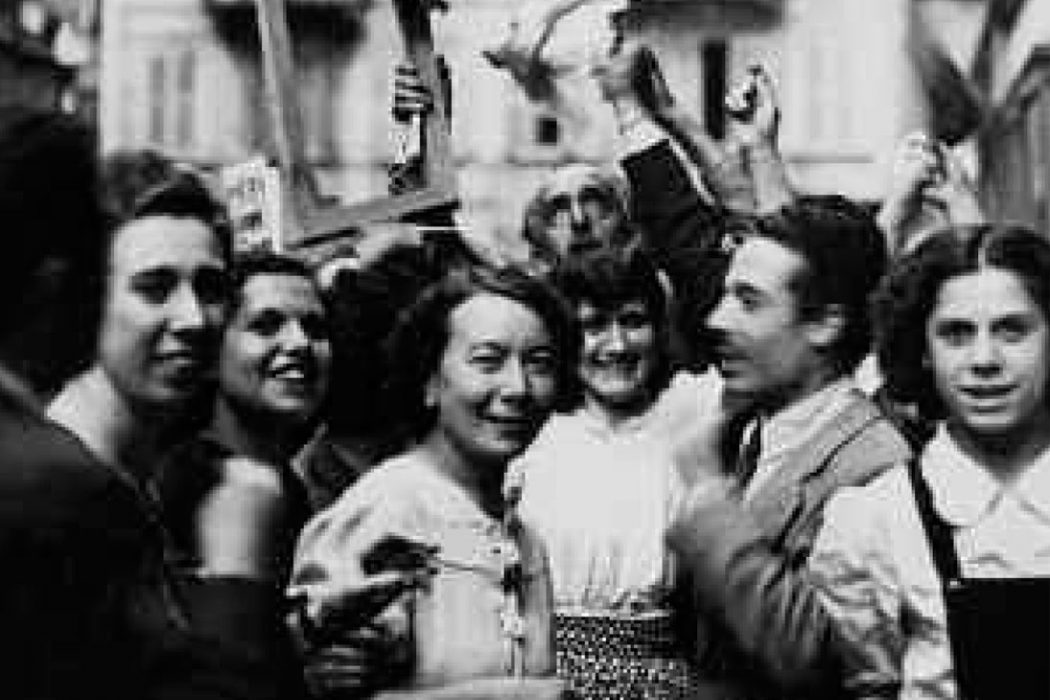 Manuela Consonni is head of the Department of Italian Studies and the Romance and Latin American Studies section at the Hebrew University of Jerusalem. She is affiliated with the Department of Modern and Contemporary Jewish History. She has recently been appointed head of the Vidal Sassoon International Center for the Study of Antisemitism.

Consonni is the author of the monograph War of Memories: Deportation and Shoah in Italy, 1945-1985 (Magnes Press, 2005), in which she addresses the development of the memory of deportation and extermination in Italian society between 1945 and 1985, through the prism of the Jewish minority specifically, on how the Jewish minority influenced the creation of a national anti-Fascist and post-Fascist identity. She has been on the faculty at the Hebrew University since 1991,

The Eclipse of Anti-Fascism seeks to cover the history of the “anti-fascist paradigm”, namely anti-Fascism held as the backbone of the Italian Republic, from its inception to its decline. Its subtitle, Resistance, the Jewish Question and Political Culture in Italy, 1943-1987, explains the non-systematic structure of the text, which is organized in three parts, each dedicated to a different period of this history – the period up to 1948, then the one between 1948 and 1967, and finally the one covering the 1970s and 1980s to the fall of the Berlin Wall and the dissolution of the communist world – moving along as a historical biopsy that spans political and historical debates, the press, specific journals, various write-ups and countless reports. Diverse sources are used in the discussion, emphasizing its different aspects, all of them converging to show how anti-Fascism, with its history and culture, has represented the highest point of moral and ideal tension the Italian Republic experienced throughout its history.

The book is substantiated through the use of three intertwining approaches: Italy’s political history, the memory of Fascism and the Resistance, that of political deportation and the memory of the extermination of the Jews.

Addressing simultaneously politics and the political culture of anti-Fascism, this study sheds new light on the relationship between political deportation and Jewish extermination in Italy, between Italians and Jewish Italians, distinguishing the act of writing from its reception over time. This volume also seeks to show how, since the beginning, the Jewish world of the post-war era assumed an independent role, that of political protagonist in the triumph over Nazism and in the building of the Italian democracy.

Pillar of this reconstruction is Primo Levi –his work functioning, in all three sections, as common thread and model for different approaches to analyzing anti-Fascism, deportation and extermination, as well as ethics and politics. Levi’s words from If This Is a Man to his final book, The Drowned and the Saved, accompany and articulate the pages of this study.

Anti-Fascism, with its powerful hermeneutic, shaped the political, historiographic and memorial reflection on the past, that contributed to the coming of age of democratic Italy. It was the ideology of those who, in 1945, pledged to rebuild Italy and give it a place alongside the nations that defeated Nazi-Fascism; the ideology that allowed disparate and divided parties to form governments, despite their differences, and begin work on rebuilding a country devastated, materially and morally, by the fascist war, the deportations and a terrible occupation. It was anti-Fascism, in other words, that enabled the creation of the institutional and political system on which the painful transition from Fascism to the Republic rests.

Indeed, the Republic was established on the alliance between different political parties that had emerged from the liberation war. Such alliance reflected, in a profound way, the urgent nature of the broad anti-Fascist alliance between the two great powers, the US and the USSR and their cooperation at the defeat of Nazism and Fascism. It rested on two different conceptions of anti-Fascism that, in turn, expressed conflicting visions regarding their interpretations of the past: for the Americans and their Western allies, the fight against Fascism was a struggle of democracy against the dark forces that had violated peace and committed war crimes and crimes against humanity; for the Soviets, on the other hand, the interpretation consisted of the opposition in the pairing of Fascism and anti-Fascism: thus a merely ideological question.[1]

The Nuremberg trial, in its unfolding and outcome, effectively sums up the tension between these two opposed narratives. In Italy, the historical narrative did not incorporate the legal language of the proceedings – because the country did not celebrate trials, at least not to the same degree as France or Germany[2]. For Italy, more than for other nations, the liberation war and its dead became the foundation on which to rebuild the country, and Anti-Fascism the sole narrative of its recent history purged of any legal language and critical outlook on twenty years of Fascism.

With the division of Europe into two opposed blocs and the Cold War, the anti-Fascist paradigm cracked, but remained at the center of the political culture and historiography of Italy, despite losing its effectiveness as foundation of the broader political alliance. Anti-Fascism remained strong and unquestioned, especially among parties on the left — communists and socialists, but also among secular non-Marxist parties — which considered it central to the democratic life of the country. For all of them it represented an ideal shield against the attacks of the conservative right.

However, it was not so much anti-Fascism but rather anti-communism that characterized the political ideology of the parties that won the elections in 1948 and marginalized the left from the government. Anti-Fascism and its interpretive paradigm migrated from the political arena to the center of the cultural sphere.

Culture and politics began a process of separation destined to last a long time, the impact and consequences of which can be felt to this day. At the root of this divergence are the weaknesses intrinsic to the very birth of the anti-fascist paradigm and its political use: the responsibilities of Fascism were put aside, favoring the continuity of the State rather than the necessity to come to terms with the past.

The anti-Fascist paradigm continued to make up an integral part of the image of a country that, while rejecting Fascism, drew from the memory of the liberation war the impetus to appeal to the masses of workers and peasants to participate in the democratic life. A country that drawing from the memory of political deportations and Jewish extermination–cultivated through vast amounts of memoirs, undoubtedly the largest in Europe–derived the painful awareness of a battle that was still going, and pushing forward so that the past would not be repeated.

During this process, the fear of a possible resurgence of Fascism appears to have been tangible in the political and cultural discourse of the left. A retrospective look shows that this possibility was considered a real and dangerous one, enough to make anti-Fascism the fulcrum of any political and cultural discourse on the past. However, in this context, the Christian Democratic right and the fascist right appeared similar and anti-Communism stifled anti-Fascism, particularly when the latter embodied the very image of the Italian political left.

The debate on Fascism became lively and heated, and historiography explored further its social, political and cultural aspects. Adolf Eichmann’s trial, held in Israel in 1961, is a paradigmatic example of this tension. On the historical level, it formalized the death of Jews in concentration camps as a form of Resistance to Fascism, and added new content to the memory of the Jewish extermination, thanks to the emergence of the witness’ figure as its historical keeper. For the purpose of investigation, another factor should be noted: the change caused by the Six Day War of 1967, whose consequences extend to the present day. The Israeli blitz war caused a rupture in the alliance between the Jewish world and part of the political left, bringing Jewish anti-Fascism into question, while affirming a pro-Arab and anti-Israeli left. In the new post-colonial reading, anti-Zionism took shape as reflection of a society in which the hatred against the Jews had not stopped reproducing itself, but continued on in a quest to find new attributes to target.

In the following period, the anti-fascist paradigm began to show signs of wear and appear “staggered” with regards to the political and social situation of the country. Its political isolation resulted from the strategy of tension[3] as well as from terrorism with its claim to bring to completion the Resistance’s unfulfilled goals. In the historiographical arena, the profound revision of Fascism prompted by Renzo De Felice’s Interview on Fascism and the debate it generated, ten years before the Historikerstreit would explode in Germany, weakened anti-Fascism showing that it could no longer function ad the ideological backbone of the country. At the same, the memory of the extermination of the Jews begins to separate from that of the political deportations and the Resistance, taking on paradigm of “victimology”. This paradigm will further develop after the dissolution of the communist world and will not include the fight against Nazi-Fascism but will concern exclusively the memory of Jewish extermination. The eclipse of the anti-fascist paradigm in Italy anticipated what happened in the rest of Europe after 1989.

Despite the demise of the ideological conflict between the guardians of Marxist orthodoxy and the proponents of the free world, anti-Fascism still remains the privileged space for understanding and reinterpreting the Italian Republic of yesteryear, but also perhaps and above all the Italian Republic of today, without ideological ambiguity or equivocation. Sine ira et studio.

Translated from the Italian by Donald Hubert Duffy III

[2] His influence in Europe, within the context of the first debates on post-war historiography, was of the greatest importance. Vedi Dan Diner, Studies on Germany, Nazism and the Holocaust, Berkeley, University of California Press, 2000, p. 178.

[3] Set of covert operations carried out by Italian and international government agencies to destabilize and manipulate the public opinion.