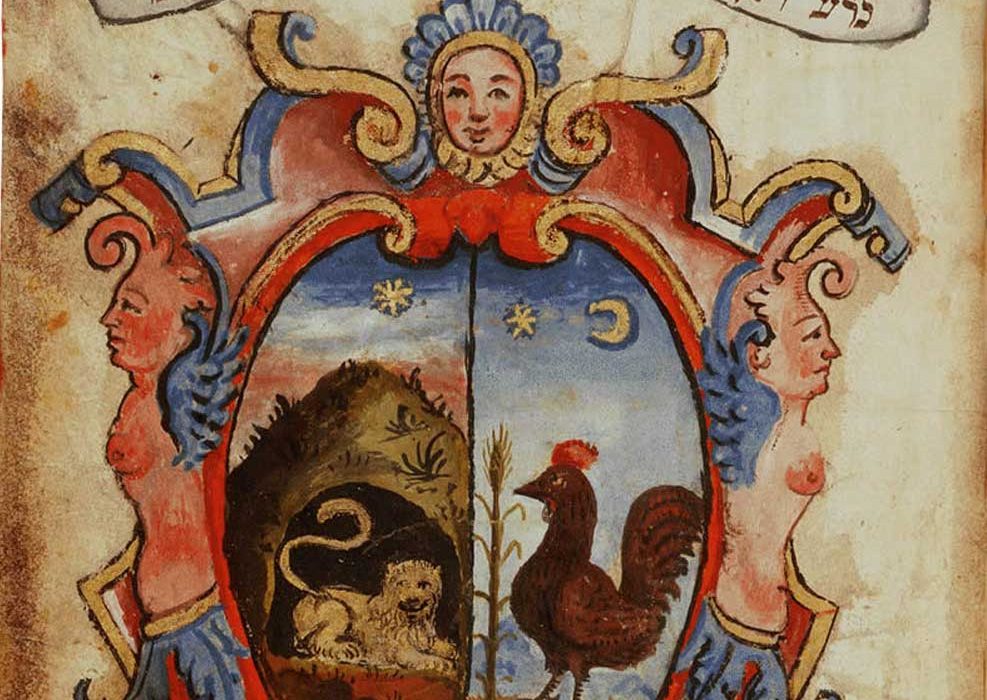 The Golden Haggadah is one of the finest of the surviving Haggadah manuscripts from medieval Spain. The Haggadah, which literally means ‘narration’, is the Hebrew service-book used in Jewish households on Passover Eve at a festive meal to commemorate the Exodus from Egypt.

The Golden Haggadah was probably made near Barcelona in about 1320 and brought to Italy after the expulsion from Spain. In addition to the Haggadah text itself the manuscript contains liturgical Passover poems according to the Spanish rite. The text is preceded by a series of full-page miniatures depicting scenes mainly from the Book of Exodus. These sumptuous illuminations set against gold-tooled backgrounds earned the manuscript its name and were executed by two artists in the northern French Gothic style. References suggest that the artists or who guided them were well versed in Midrasnhic literature and Jewish commentaries.

The 17th-century Italian binding has an elaborate border on each cover. Hebrew is written from right to left, so the Golden Haggadah opens from the right.

The opening page adorned with the coat of arms was commissioned by Joav Gallico for his daughter’s wedding to Eliah Rava at Carpi in 1602. An inscription records that the wedding between Joav Gallico’s daughter Rosa and Eliah Rava took place in Carpi, on the tenth of Heshvan 5363 (corresponding to 25 October 1602). The Golden Haggadah was probably taken to Italy by Jews fleeing Spain shortly after 1492. It remained in Italy until acquired by the British Museum in 1865 as part of the collection of Giuseppe Almanzi.

The inscriptions on the opening page read “Order of the Passover Haggadah” and “with special poems about all the wonders and the miracles which were performed during their coming out of Egypt as free men”.

You can view the entire Golden Haggadah at the British Library, Ms. 27201 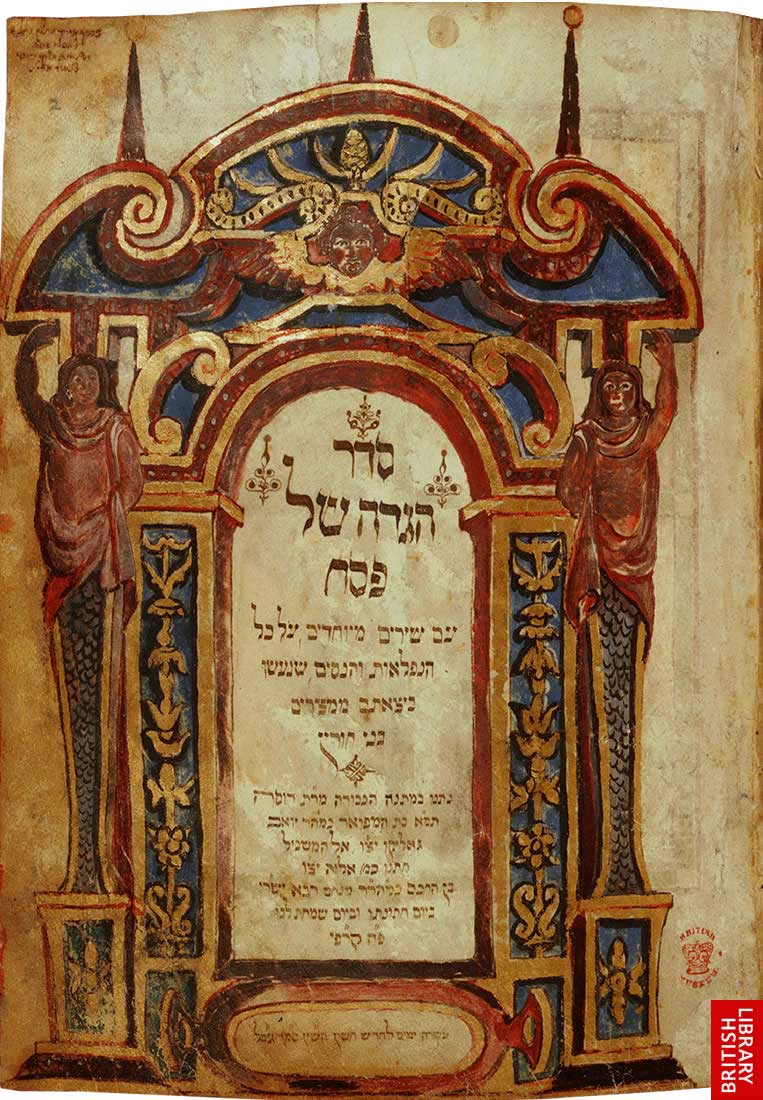 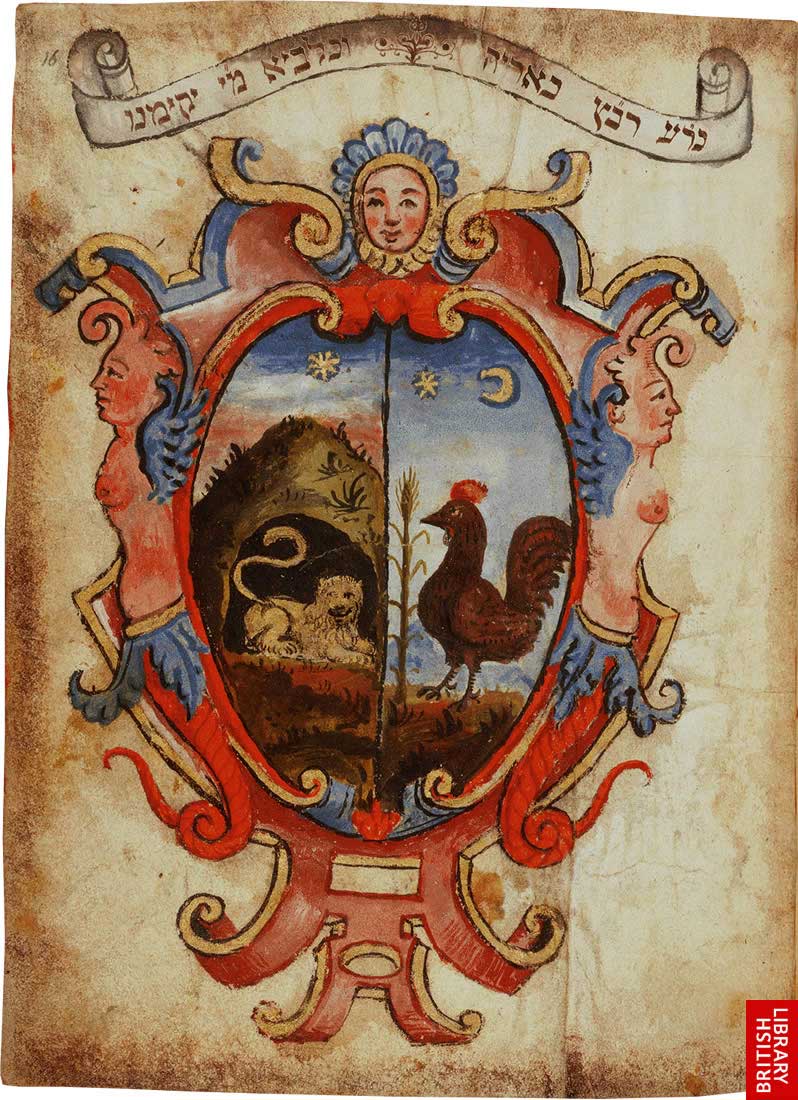 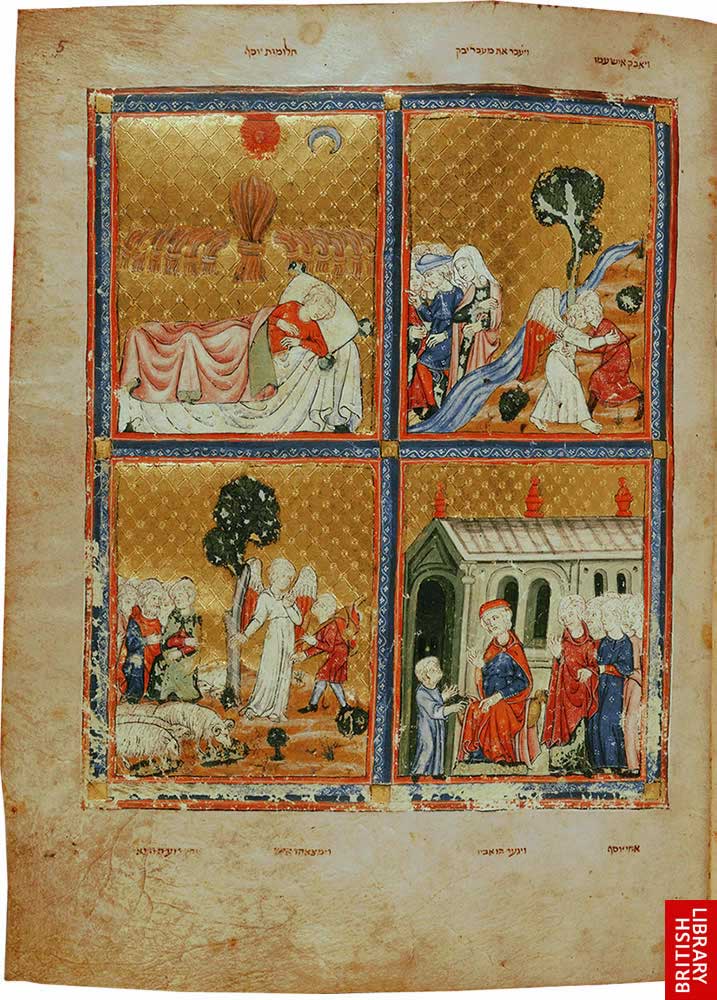 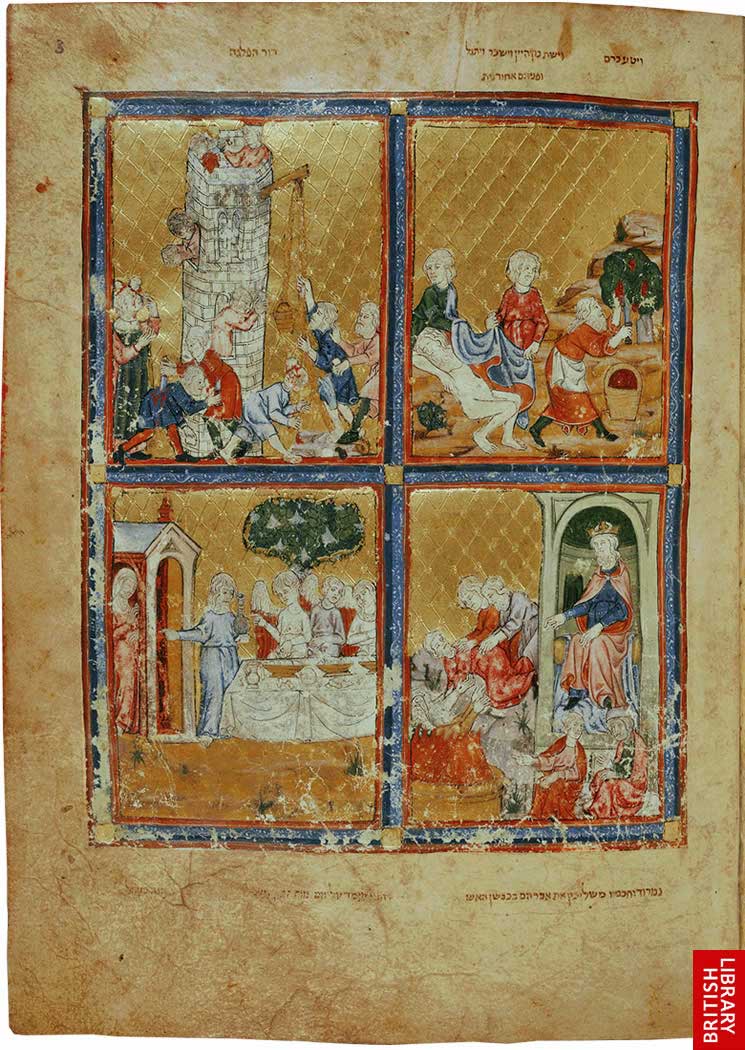 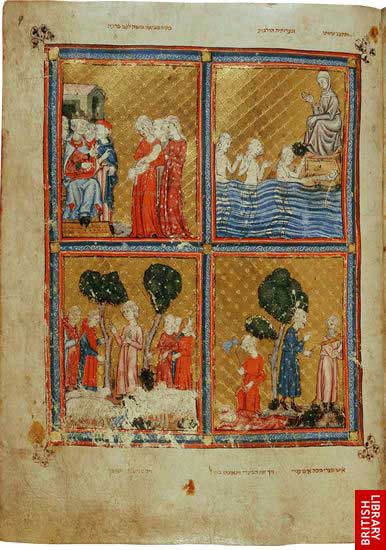 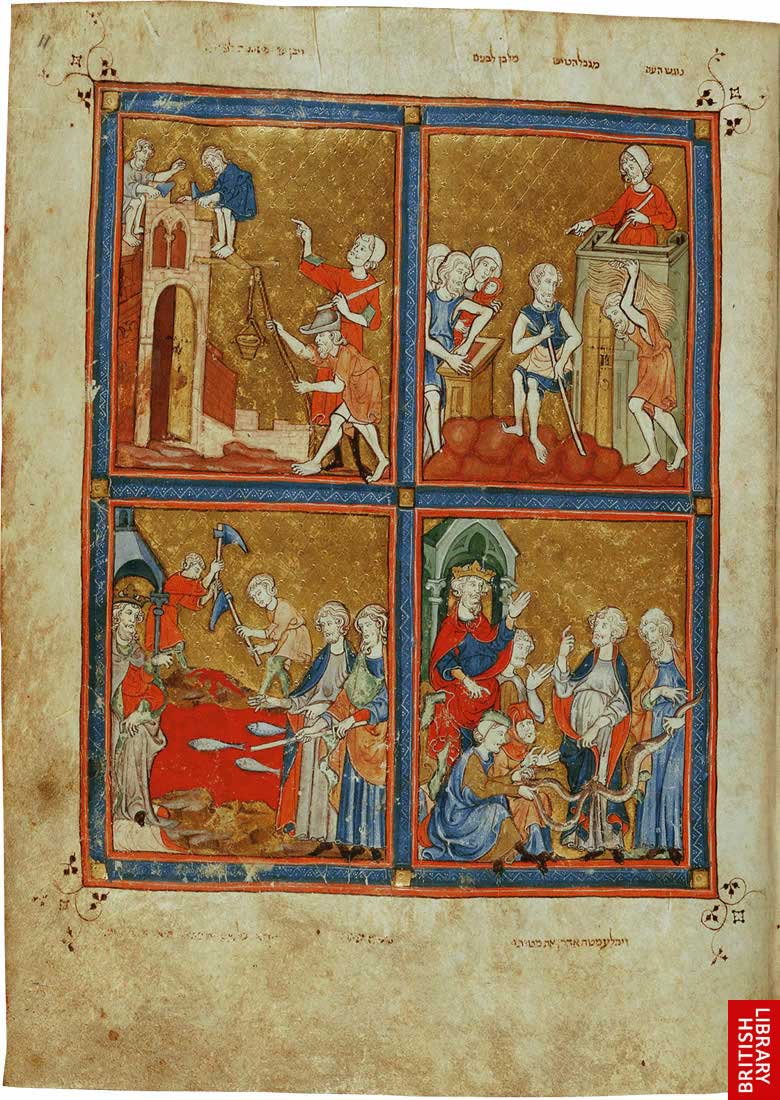 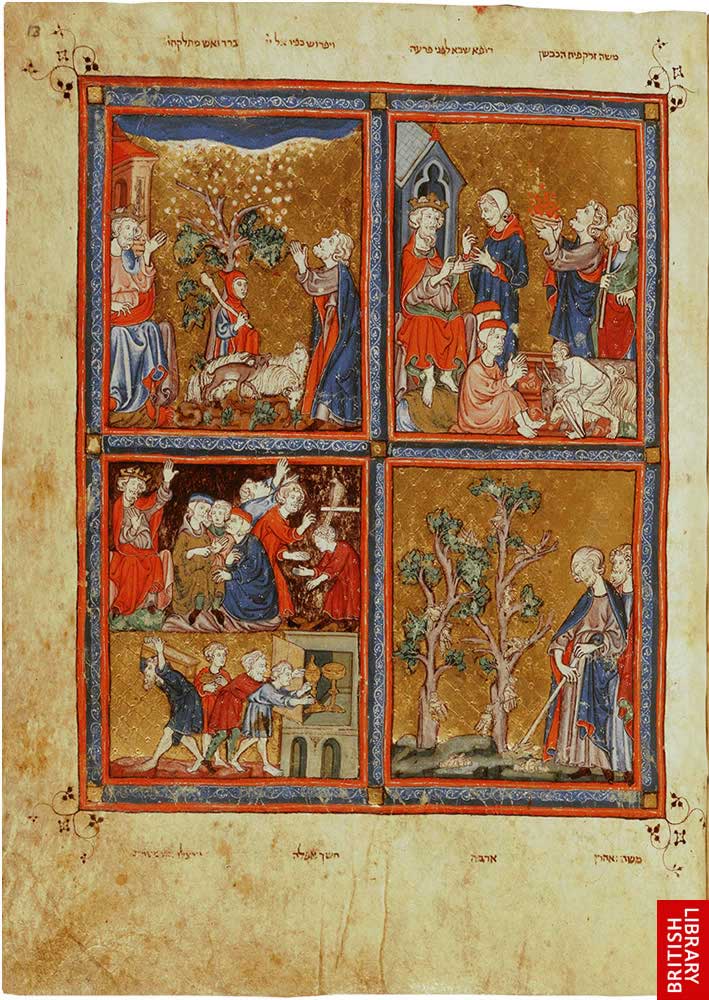 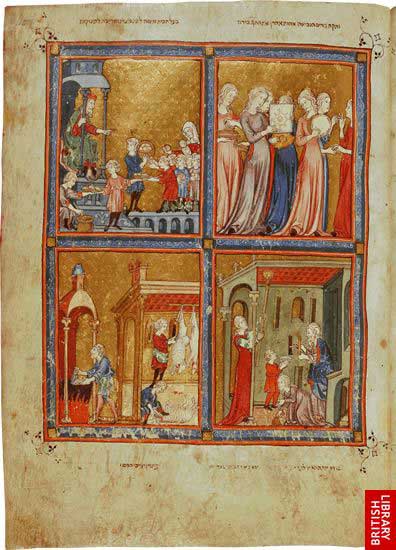 Joav Gallico, the manuscript’s earliest known owner, lived in Asti, near Turin. He became Rabbi of Mantua in October 1602. The Gallicos, prominent in Italy in the 16th and 17th centuries, could be traced back to a family brought to Rome by Titus after the destruction of the Second Temple in AD 70. Eliah Rava and his father Menahem were known rabbinic scholars in northern Italy.

The Gallico emblem displays a cockerel facing a corn stalk with a crescent and six-pointed star. The Rava crest shows a crouching lion guarding a mountain cave, with an eight-pointed star. The motto on this scroll comes from Jacob’s blessing of Judah: ‘He stooped down, he crouched as a lion, and as an old lion, who shall rouse him up?’ (Genesis 49, verse 9). This might be a reference to the Ravas’ descent from the tribe of Judah. The oval emblem is supported by two naked mermaids in profile, an elaborate plinth and a sun in splendor as a crest.

Bibliophile and a poet Giuseppe Almanzi was  born at Padua on March 25, 1801. The eldest son of Baruch Ḥayyim Almanzi, a merchant, he received a good education by private tutors, and, according to the Italian custom, he began at an early age to write Hebrew poems on special occasions.

At the age of twenty he was a devoted student of Jewish literature and an ardent collector of Hebrew books. Rare books and manuscripts that he could not purchase he copied. He had a good command over the Hebrew, Italian, Latin, German, and French languages, and is said also to have known Syriac. His tastes as a bibliophile were fed by the large and well-selected library formerly belonging to Ḥayyim Joseph David Azulai, which his father had bought from Azulai’s son, Raphael Isaiah, at Ancona. This library was largely increased by Giuseppe Almanzi, its rare editions and manuscripts making it one of the most important in private possession. Its treasures were used by Luzzatto, Steinschneider, Zunz, etc. During the last few years of his life Almanzi lived at Trieste, where he took a lively interest in all communal affairs. After Almanzi’s death, Samuel David Luzzatto published a number of his Hebrew letters and of his poems, in a collection entitled “Yad Yosef” (The Hand of Joseph), Cracow and Triest, 1889.

Most manuscripts from his beautiful collection were acquired by the British Museum, while his rare books found their way to the bookseller Frederik Müller in Amsterdam, and were bought in 1868 by a New York philanthropist. In 1893, they were donated to the Columbia University Library.

On the Dark Side of History

The historian Carlo Ginzburg talks about his publications and his historical method of microhistory, which he pioneered. Ginzburg dismisses the prevailing relativism of historical truth as intellectually, politically, and morally lazy,…