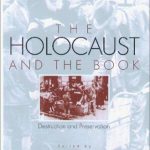 Jonathan Rose, The Holocaust and the Book, Univ. of Massachusetts Press, 2008

Jonathan Rose
Jonathan Rose (Ph.D. University of Pennsylvania) is the William R. Kenan Professor of History. His fields of study are British history, intellectual history, and the history of the book. He served as the founding president of the Society for the History of Authorship, Reading and Publishing, and as the president of the Northeast Victorian Studies Association. His book The Intellectual Life of the British Working Classes (2001) won the Jacques Barzun Prize in Cultural History, the Longman-History Today Historical Book of the Year Prize, and the British Council Prize. He has also published A Companion to the History of the Book (2007), The Holocaust and the Book: Destruction and Preservation (2001), The Revised Orwell (1992), British Literary Publishing Houses 1820-1965 (1991), and The Edwardian Temperament 1895-1919 (1986). He is coeditor of the journal Book History, which won the Council of Editors of Learned Journals award for the Best New Journal of 1999. He has held visiting appointments at the University of Cambridge and Princeton University, and he reviews books for the Times Literary Supplement and the Daily Telegraph (London). Currently he is writing a study of Winston Churchill’s literary career.

Between 1933 and 1945, Nazi Germany systematically destroyed an estimated 100 million books throughout occupied Europe, an act that was inextricably bound up with the murder of 6 million Jews. By burning and looting libraries and censoring “un-German” publications, the Nazis aimed to eradicate all traces of Jewish culture along with the Jewish people themselves. The Holocaust and the Book examines this bleak chapter in the history of printing, reading, censorship, and libraries. Topics include the development of Nazi censorship policies, the celebrated library of the Vilna ghetto, the confiscation of books from the Sephardic communities in Rome and Salonika, the experience of reading in the ghettos and concentration camps, the rescue of Polish incunabula, the uses of fine printing by the Dutch underground, and the suppression of Jewish books and authors in the Soviet Union. Several authors discuss the continuing relevance of Nazi book burnings to the present day, with essays on German responses to Friedrich Nietzsche and the destruction of Bosnian libraries in the 1990s. The collection also includes eyewitness accounts by Holocaust survivors and a translation of Herman Kruk’s report on the Vilna ghetto library. An annotated bibliography offers readers a concise guide to research in this growing field.

Laura Orvieto’s Stories of the World