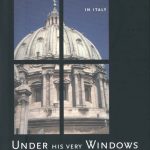 Pope Pius XII has often been criticized for his silence during the extermination of European Jewry during World War II. In his defense, some have alleged that the pope was doing a great deal to help the Jews but that his efforts were necessarily behind the scenes.

This meticulously researched and balanced book examines exactly what the pope, his advisers, and his assistants at the Vatican Secretariat of State did to help the Jews of Italy.

It finds that they did very little.  The book begins by discussing prewar Vatican and Jesuit publications, in which Zuccotti uncovers a hitherto unsuspected prevalence of anti-Jewish sentiment.

These publications, along with archival documents, indicate that Vatican protests against Italian anti-Jewish laws were limited to measures affecting converts and Jews in mixed marriages with Catholics, as was help with emigration; the papal nuncio’s visits to foreign Jews in Italian internment camps did not differ from those to non-Jews and in no way eased their material discomfort; and interventions by diplomats of the Holy See for Jews threatened with deportation were rare, always polite, and seldom decisive.   Above all, Zuccotti finds no evidence of a papal directive to church institutions to shelter Jews and much evidence to suggest that the pope remained uninvolved. The notion that Pius XII was benevolent and helpful to Jews behind the scenes proves to be a myth.

From the press:
Susan Zuccotti’s Under His Very Windows is a prodigious accomplishment. The research is astounding in its depth and breadth. The task of finding sources where none were thought to exist seems not to have daunted Zuccotti in the least.

The result is that we now know immensely more about the Vatican and the Holocaust in Italy than we did before. Zuccotti is able to show that while many bishops and lower clergy aided Jews admirably, the Vatican itself remained generally aloof. In one case, that of St. Paul’s Outside the Walls, the Vatican actually gave orders that the monks should desist from harboring Jews.
Zuccotti is relentless in tracking down details. In cases where the Vatican was credited with assisting Jews or in postwar instances where Jews gave the Vatican credit for assistance, Zuccotti carefully researched each point. Thus, in the case of the American Joint Distribution Committee, she found that help did come from various religious institutions in Rome but not from the Vatican itself.

Zuccotti has been criticized for being overly negative in her judgments about the Vatican. Yet, given her sources, there really is no other way that she could construct her narrative. Having already published a book on The Italians and the Holocaust, Zuccotti knows her field expertly and her expertise is very evident in Under His Very Windows. Michael Phayer, Marquette University

n the last three years the papacy’s role in World War II, and above all its response to the Holocaust, has come in for fresh scrutiny. In part this is because the process for canonizing Pope Pius XII, begun nearly 40 years ago, is now, it seems, heading toward some sort of conclusion. In part it is because of pronouncements made by the Vatican. In 1998 the Holy See’s Commission for Religious Relations With the Jews issued a statement entitled ”We Remember: A Reflection on the Shoah,” in which it expressed ”deep . . . regret” for ”the errors and failures of those sons and daughters of the church” who had done less than they should to oppose or mitigate Nazi atrocities. Last spring, in Israel, squaring up to the issue of Roman Catholicism’s historic anti-Judaism, Pope John Paul II declared that ”the Catholic Church . . . is deeply saddened by the hatred, acts of persecution and displays of anti-Semitism directed against the Jews by Christians at any time and in any place.’

”Under His Very Windows,” Susan Zuccotti’s third book about the Holocaust, comes hot on the heels of John Cornwell’s ”Hitler’s Pope” (which makes a case for the prosecution) and Ronald J. Rychlak’s ”Hitler, the War, and the Pope” (for the defense). Zuccotti is firmly in the prosecution camp. Her aim is to show that whatever help was given to the Jews by the Catholic Church during the war resulted almost entirely from spontaneous acts by courageous individuals — priests, monks and nuns, and occasionally prelates — and not from any interventions by the Vatican. The argument that Pius XII worked tirelessly behind the scenes for the Jews (an idea already circulating by the end of the war, and endorsed in the 1960’s by Pinchas E. Lapide, an Israeli diplomat who calculated that the pope was responsible, directly or indirectly, for saving 860,000 Jewish lives) is dismissed as myth.

Zuccotti makes her case strongly. She charts the near-total silence of both Pius XI and Pius XII in the face of the Italian anti-Jewish laws of 1938, underlining how the Vatican intervened only on specific issues such as interracial marriages and converts to Catholicism. She looks at the assistance given by the church to internees in Italy after June 1940 and concludes that ”the Holy See had done nothing more for Jewish internees than for non-Jews, and that was little enough.” She examines in detail how much the Vatican knew about the Final Solution, and when, and suggests, like others before her, that while the full magnitude of the tragedy may have been unclear, the pope and his senior officials had plenty of reliable information and that from 1942 they ”knew and believed a great deal about the exterminations.” In the light of this, she says, the fact that Pius made just two vague public references in the war to those who were suffering on account of ”their nationality or descent” (using the neutral word stirpe rather than razza) was wholly reprehensible.

Zuccotti then looks at the plight of Jews in Italy from the time of the Italian armistice in September 1943, when the Germans took direct control of north and central Italy, to the end of the war. She examines the harrowing events surrounding the Rome roundup of Jews by the Nazis in October 1943 and the deafening silence of the pope. She then explores the efforts made by the church in Rome and northern Italy to assist those Jews who had managed to elude the Nazis. There is a good deal of fresh and often fascinating material here, drawn from local archives and from interviews by the author with survivors. Zuccotti’s main point is to show that the many instances of Jews being sheltered or assisted by clerics were not due in any way to Pius.

This is a serious and well-researched book that certainly raises yet more questions about the conduct of the papacy in World War II. But is it good history? For all its scholarship, it feels driven by a remorseless desire to find wanting. Only in the conclusion does Zuccotti face what for the historian must be the most important question: not so much the fact of silence or relative silence, but how that silence is to be understood and interpreted. Credit is given in places; but for the most part the text is a litany of phrases like ”it was not enough,” ”that was all,” ”it was very little,” ”lamentable,” ”he was wrong,” ”should have” — phrases that repeatedly raise questions about the author’s intellectual, as well as moral, vantage point. All historians make judgments, but their first duty is surely to try to understand. Zuccotti condemns, but offers little new insight into why the Vatican and Pius acted as they did.

Part of the problem lies with shortage of material. The only Vatican papers available for the war years are the 11 volumes published by the Vatican between 1965 and 1981. Accordingly, it is hard to gauge the complex interplay of political and moral considerations that necessarily informed papal actions. Also, and perhaps crucially, Pius himself remains elusive: he was solitary, secretive and autocratic, more given to praying than confiding in others or committing private thoughts to paper. But even if more material becomes available, reconstructing the moral and emotional atmosphere out of which the genocidal atrocities of the war grew, as well as the silences of the pope, would be extremely hard. It is easy with hindsight to dismiss certain fears or hopes as misplaced. At the time they were real.

Like Cornwell, Zuccotti is keen to highlight the traditional anti-Judaism of the Catholic Church; and while she does not go as far as Cornwell in declaring that Pius was at heart an anti-Semite who believed that the Jews had brought their own fate upon themselves, we find ourselves being nudged quite firmly in this direction. The available evidence, however, does not warrant this. That strong prejudices against the Jews existed in Catholic circles is beyond doubt, and that these were shared in some measure by Pius is certain. But prejudices of this kind were sadly common in Europe in the early 20th century, and not just among Catholics. Moreover, there is a vast chasm between cultural and religious anti-Judaism and racist anti-Semitism. Pius’s reticence in the face of the Holocaust, as of many other atrocities in the war, probably arose from a complex amalgam of political, moral and religious considerations, interlaced with uncertainty and fear. In what measure exactly these various elements worked to inform his decisions we may never know.

Hearing Jewish, Writing Italian  Reconsidering the Written Sources of Italian Jewish Music The earliest historical sources that document the development of Jewish musical culture in Italy are a series of…