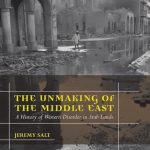 Jeremy Salt, Unmaking of the Middle East: A History of Western Disorder in Arab Land, Berkeley University of California Press, 2008

Written for those who want to know more about the Middle East than the mainstream media is willing or able to tell, this book begins by examining a question that has been asked by numerous commentators since September 11, 2001: “Why do they hate us?” Jeremy Salt offers the background essential for understanding the Middle East today by chronicling the long and bloody history of Western intervention in Arab lands. In lucid detail, he examines the major events that have shaped the region–ranging from the French in Algeria and the British in Egypt in the nineteenth century to the Palestinian-Israeli conflict and to the continuing war in Iraq. Linking all of these together, Salt paints a damning picture of a sustained campaign by Western powers to dominate the Middle East by whatever means necessary. Throughout, he emphasizes the human cost of the policies put in place to preserve “Western interests” or in the name of bringing civilization, democracy, or freedom to the region. Making use of extensive research in U.S. and British archives that reveals what politicians were deciding behind closed doors, and why, this is a book that will change the way we see the Middle East.

The Unmaking of the Middle East: A History of Western Disorder in Arab Lands, Times Higher Education

This outstanding, thoroughly researched and vividly written book focuses on the last two centuries of Western involvement in the Middle East. The topic is not new, and the market for books on the Middle East is crowded. No matter. Wider readerships will not find a more comprehensive, accurate, lucid or illuminating treatment – or one that more coherently or convincingly pursues such a distinctive and hard-hitting argument.

Jeremy Salt rescues us from a surfeit of ill-informed talking heads and pundits, and from those all-too-popular accounts purporting to explain West-Middle East relations in terms of timeless, civilisational or religious conflict. His book also firmly rejects the longstanding (neo)colonial hubris that intervention in the region can be understood in terms of benign Western projects of civilisation, modernisation and democratisation.

Instead, we are treated to in-depth analysis and archival documentation (involving many welcome quotations in direct speech) of the high diplomatic and political wranglings surrounding Western attempts to dominate the region. These are shown to be based not on good intentions but on “strategic need and commercial greed”, and involving, as Salt says, “invasion, occupation, collective punishment, incursions, subversion, overthrow, bullying and intimidation, economic exploitation, the support of tyrants, and the manipulation of bribed and suborned kings and prime ministers”.

With a minimum of rhetoric or puffery, we also get useful glimpses of the various racial, civilisational and apocalyptic notions and desires of a number of the Westerners involved, and a striking sense of the continuities in this language from the early 19th century to the present day.

Salt’s thesis is by no means new in general terms, but I do not know of another book that expounds it so competently and comprehensively, from the French invasion of Algeria (1830) to the US-led invasion of Iraq (2003), with discussion of Egypt, Sudan, the Balkans, Anatolia, Syria, Lebanon, Israel, Palestine, Iraq and Iran along the way. But he does add some forgotten pieces to the jigsaw: the hundreds of thousands of Muslims who “died or were stampeded from south-eastern Europe” in the face of Bulgarian, Serbian, Greek and Montenegran onslaught during the Balkan War of 1912-13; the grisly fate of Muslims in the territories conquered by the Russians and held by them or the Armenians during and after the First World War.

Salt’s cogent and well-sourced reading of the Arab-Israeli war of 1967, furthermore, as neither a war of defence nor a war of prevention for Israel, but a war of opportunity – for Israeli aggrandisement and territorial conquest – is a must-read for the specialist as well as the general reader. Above all, whereas “not once in these last two centuries … have any of the cities, towns and villages of the West come under attack by Arab or Muslim armies”, it is the sheer extent of the violence practised in the region by the militaries of Britain, France, the US and Israel and their supporters that the book so effectively underlines.

Even though Salt’s lens is relatively tight – we learn a lot about (often Western) officials and politicians and their attitudes and little about society, economy, social movements and everyday lives in the Arab world – he does not simply blame the West for everything, or treat Arabs and Muslims as hapless victims of foreign machination. He makes clear that he is merely shedding light on only one (albeit important) dimension of modern Middle Eastern politics. He notes, for example, that another book needs to be written about the “responsibility” of Arab leaders. Although Salt focuses on elites, he is no conspiracy theorist. Instead, he is wonderfully sensitive to the contradictions and faultlines existing even in the centres of power, from Winston Churchill’s almost immediate irritation with the British-installed King Faisal of Iraq in the early 1920s, to divisions among US policymakers on Israel, to the ways in which local events – such as the Iraqi resistance in 1920 – impacted decisions at the top.

Salt’s message is that there is something fundamentally wrong with the way the West has gone about its relations with the Middle East over two centuries. Those who would console themselves with the reductive hope that this is just West-bashing – perhaps a narrower group in the wake of the catastrophe of Iraq – should at least reserve judgment and engage with his arguments and evidence. This important book will be widely read by general readerships and scholars of the region alike.