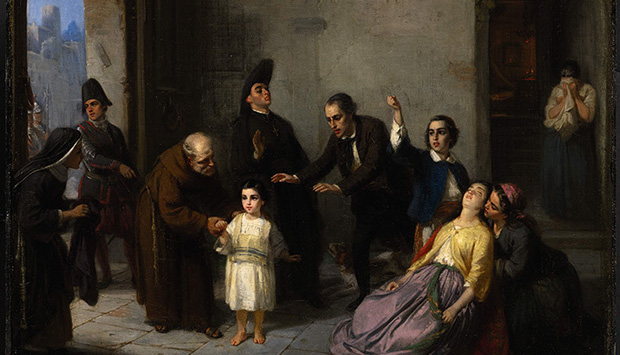 “A masterful examination of what must be one of the most intriguing figures of mid-nineteenth-century American literature, Writing for Justice reflects a refreshing transnational turn in literary study.”—David I. Kertzer, Pulitzer Prize–winning author of The Pope and Mussolini and The Kidnapping of Edgardo Mortara

The title of this book and especially its subtitle attest to the ambition and historic sweep of the subjects and stories Elèna Mortara has undertaken to tell in this extraordinarily interesting and thickly researched work. There are two main narratives, that of the Jewish child Edgardo Mortara, born in Bologna in 1852, then part of the Papal States, who—at the age of two, when he seemed about to die—was taken secretly by his family’s maid to be baptized, while his parents were away. In 1858, when the story came out, Pope IX had the child abducted and brought to him to be adopted as his spiritual son and raised thereafter as a Catholic. The parents were desperate to get their child returned, but the Pope was adamant—believing that the boy was now “saved” and being brought up in the true faith—and they were not allowed even to see him. The kidnapping became an international scandal, one more oppressive cruelty in the world of mid-nineteenth-century Europe and America, where various struggles for freedom, justice, and enlightenment were going on.

The transatlantic aspect is shown vividly by the “Writer for Justice,” Victor Séjour, born a French-speaking Creole, Catholic, in New Orleans in 1817. He was un homme de couleur libre (a free man of color) whose parents had come from St. Domingue. He started as a poet in New Orleans, but made his way to Paris in the 1830’s, a more liberal place than the harsher environment of the American South. In 1837, only twenty years-old, he made a splash with a short story “Le Mulâtre” for a French abolitionist newspaper, and in 1841 wrote a nationalist ode to Napoleon upon the return of his body to Paris from St. Helena. That opened literary doors for the twenty-four-year-old, and he never looked back, beginning a distinguished writing career of more than twenty-five years, eventually being named Chevalier de la Légion d’Honneur.

The connection with the fight against slavery in the US, for Emancipation, a word that in that era gained currency in various religious, ethnic, nationalist movements for equality and justice, was obvious to Séjour and others. What ties Séjour to all this, and is the main concern of Professor Mortara’s coverage of his entire work and career, a notable contribution in itself, is the play he wrote in 1858-59 in response to the Mortara affair. He changed the abducted child from a boy to a girl, Noémi, and the struggle is between the two mothers of the child, the biological Jewish one, and the adoptive Christian mother. In French the play is called La Tireuse de cartes (“The Fortune Teller”); it follows the Jewish mother, who has disguised herself as a fortune teller, travelling widely to try to find a trace of her lost daughter. The play was an enormous hit and then translated into various languages as one more weapon against repressive tyrannies. The Church never relented and Edgardo himself, in a supreme irony, became a priest (which is not surprising, after his forced separation from his family and Catholic upbringing), and when at last could meet with his family, well after his kidnapping, he tried to get them to convert to the true faith! He lived until 1940, dying in Belgium a few months before the German army invaded, when he might have ended up as a Jew (to the Nazis) after all.

The book offers many surprises and historical insights: e.g., the many American Renaissance writers influenced in the 1850’s by the Italian struggle for unity and freedom from Papal temporal power. Also the role of Napoleon III in furthering the cause of a united Italy, as well as his behind the scenes support of Séjour’s play. Professor Mortara’s more than a hundred pages of notes and bibliography, her coverage of contemporary newspapers in three languages (what she aptly calls “the rough draft of history”) are a gift. All of this is also a fine contribution to the relatively new approach to American Studies—multiethnic and multilingual (a debt to Werner Sollors’ pioneering work at Harvard), in its claim for Séjour and similar others who are or should be part of the American canon.

Finally, Mortara is herself a direct descendant of the Mortara family. She adds a poignant and welcome concluding chapter or epilogue of her own family impressions. All in all, a most illuminating read, highly recommended.

Vizio di forma is the second collection of fantastic-technological and fantastic-biological stories by Primo Levi. As opposed to Storie Naturali, which was published five years before under a pseudonym, this…