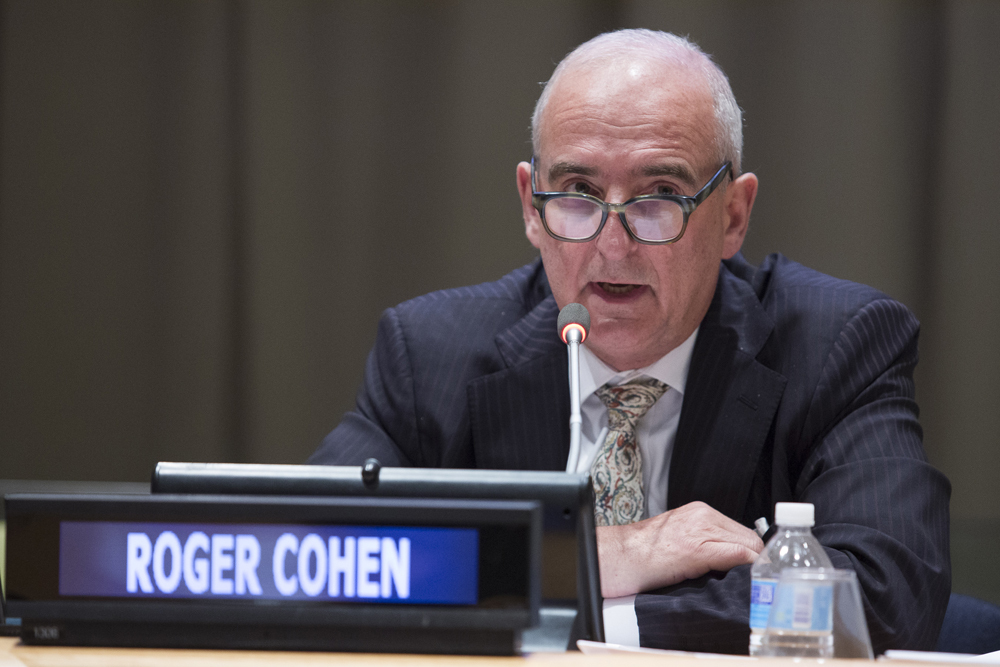 Roger Cohen
Roger Cohen joined The New York Times in 1990. He was a foreign correspondent for more than a decade before becoming foreign editor. Since 2004, he has written a column for The International New York Times, formerly known as The International Herald Tribune. In 2009 he was named a columnist of The New York Times. His columns appear every Tuesday and Friday. Mr. Cohen has written Hearts Grown Brutal: Sagas of Sarajevo, an account of the wars of Yugoslavia’s destruction, and Soldiers and Slaves: American POWs Trapped by the Nazis’ Final Gamble. He has co-written a biography of Gen. H. Norman Schwarzkopf, In the Eye of the Storm. His family memoir, The Girl from Human Street: Ghosts of Memory in a Jewish Family, was published in 2015.

Primo Levi survived Auschwitz through a double act of profound humanity: his ability even in the darkest days to see in fellow prisoners “men and not things” and so, as he put it, avoid “that total humiliation and demoralization that led many to spiritual shipwreck”; and his unceasing determination to bear witness so that nobody could ever say the unthinkable, including the murder at Auschwitz of hundreds of thousands of Jewish children, had not happened. Luck also played a part – everyone needs at least the absence of bad luck in war – but these were the inner resources Levi tapped to live.

All humanity owes him a debt for this singular moral tenacity. His chronicle of a year in a Nazi death camp, If This is a Man, is written with a severe and unsparing sobriety. Great art is less about accumulation than a stripping-away in pursuit of truth. Levi writes only of what he has seen. The crematoria are there, turning human beings into ashes; their acrid-sweet smoke hovers over the prisoners, ever present. But Levi does not describe or dwell on them because he has not seen them. His is the “view from the ground,” as Martha Gellhorn said of her work as a war correspondent.

The core responsibility of the journalist, unchanging through all the rapid transformations of my profession, is to bear witness. If This is a Man is, among other things, journalism raised through observation and distillation to the level of literature. For any journalist it is as good a holy grail as any.

This, then, is how it was day after day: the thirst, the hunger, the cold, the pain, the drudgery, the violence, the scavenging, the stealing, the filth, the lice, the selections, the executions, the hopelessness, the dreaming, the fear, the glimmerings and the humiliations. “Hier ist kein warum,” – “There is no why here” – Levi learns early on from a guard, who snatches from him, with gratuitous sadism, an icicle he has grabbed to quench his thirst. On page after page, with a chemist’s precision, Levi assembles detail by detail his account of the Nazi exercise in barbarism, a program of senseless mass murder embraced by the nation whose civilization produced Beethoven. He wants historians to know, he wants the whole world to know, lest anyone forget. But who will believe him or care?

In the passage you have just listened to, Levi’s subliminal fears about humanity find expression in a dream. He has returned. “It is an intense pleasure, physical, inexpressible, to be at home, among friendly people” in Turin. But as he recounts the horror, nobody cares. Listeners do not follow him. His sister leaves without a word. Indifference – the word now engraved on a wall at the entrance to the Holocaust Memorial in Milan – reigns. It produces in the dreaming Levi “a desolating grief.”

Indifference to the fate of the Jews of Europe was, of course, one reason they ended up in Nazi death camps whose commanders directed murder on an industrial scale for years. Throughout history, it has proved a widespread human response to terror. When action, resistance, may result in death, the averted gaze is the easier course. But indifference is the midwife to iniquity. Sit on the fence and people get killed behind it. I remember how, returning from the killing fields of Bosnia to Paris, I would try to explain at dinner parties the genocide against the Muslims of Bosnia that I was witnessing and writing about. Soon eyes would glaze over. Somebody would say, “Pass the Camembert.”

Many prisoners, it transpires, are having Levi’s dream. “Why,” he asks, “is the pain of every day so constantly translated, in our dreams, into the ever repeated scene of the story told and not listened to?”

Because humanity, unless jolted, will turn from painful truths: History, the establishment of truth against the work of the fabricators of myth and the amnesiacs, may take decades to establish. If This is a Man was published in 1947 to a deafening silence. Nobody was much interested. Only after many years did it receive due recognition. Levi’s testament was in the end implacable. He had borne witness, as he vowed to. He had given immortal expression to the facts he lived. He had embedded an arrow in the cold heart of indifference. His story was listened to at last.

Memory and history are not the same. As Pierre Nora, the French historian, has observed, they can be opposites. Memory, he wrote, “is in permanent evolution…subject to the dialectics of remembrance and amnesia…and liable to all kinds of uses and manipulations. Memory becomes latent for a long time and then suddenly revives.” In other words, it can be dangerous, as Hitler proved, using the German humiliations of World War I as his incendiary raw material.

Levi, by writing what he saw in the immediate aftermath of seeing it, anchored history against the buffeting of manipulative memory and convenient indifference.

The battle must be endlessly renewed, as this political season in America has reminded us. Trumpism is dangerous because we know from history what great power and the temperament of a bully can produce. I will leave you with Levi’s prescient words in an appendix to If This is a Man:

“We must therefore be distrustful of those who try to convince us using tools other than reason, or of charismatic leaders: we must be wary of delegating to others our judgment and our will. Since it’s difficult to distinguish true prophets from false, it’s best to be suspicious of all prophets; it’s better to give up revealed truths, even if they thrill us by their simplicity and their splendor, even if we find them convenient because they can be acquired for nothing. It’s better to content ourselves with other, more modest and less exciting truths, those which are gained laboriously, little by little and without shortcuts, through study, discussion and reasoning, and which can be verified and proved.”

E quindi niente goes a telling Italian phrase…And so nothing…E quindi niente…Life can seem meaningless, arbitrary and cruel. But no! Little by little, and without shortcuts, Levi instructed us in what it is to be human and stand vigilant against the wolves.

Obstinate facts and revelatory restraint are the building blocks of his outrage, and so, slowly, his outrage becomes all of ours. This institution, grounded on the principles of shared humanity, has no meaning if Levi’s words were ever to lose their meaning and resonance. It is as simple, in the end, as that.

We Were Outsiders in Every Possible Way

In this conversation Judge Guido Calabresi, a long time friend of Centro Primo Levi, shares stories of his family’s flight from Fascist Italy —from Milan to Yale— and the ways…