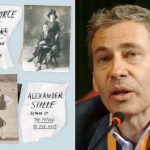 Alexander Stille, The Force of Things: A Marriage in War and Peace, Farrar, Straus and Giroux, 2013

Alexander Stille
Alexander Stille (born 1957 in New York City) is an American author and journalist. He is the son of Ugo Stille, a well-known Italian journalist and a former editor of Italy’s Milan-based Corriere della Sera newspaper. Alexander Stille graduated from Yale and later the Columbia University Graduate School of Journalism. He has written many articles on the subject of Italy, in particular its politics and the Mafia. His first book, Benevolence and Betrayal: Five Italian Jewish Families Under Fascism, was chosen by the Times Literary Supplement as one of the best books of 1992 and received the Los Angeles Times book award.

In 1995 he wrote Excellent Cadavers: The Mafia and the Death of the First Italian Republic, an investigation into the Sicilian Mafia in the latter-half of the twentieth century and in particular the events leading up to the major crackdown against the criminal organization in the 1990s following the bloodthirsty reign of Salvatore Riina.

The book was dedicated to the memory of anti-mafia judges Giovanni Falcone and Paolo Borsellino.

The events outlined in the book were made into a 1999 movie of the same name.

In 2003 he wrote The Future of the Past, about the efforts to preserve historical monuments and documentary evidence of ancient times.

His book The Force of Things: A Marriage in War and Peace is forthcoming in 2013. Stille also writes for The Boston Globe, The New York Review of Books, The New York Times and The New Yorker.

For a short time, Stille lived in Milan, Italy, but currently resides in New York City and is the San Paolo Professor of International Journalism at Columbia. He was married to poet Lexi Rudnitsky until her death in January 2005. They had one son, Samuel, who was born in October 2004. He was named a Guggenheim Fellow in 2008.

Elizabeth and Misha, Alexander Stille’s mother and father, met in May 1948 at a party for Truman Capote. She came to the party with her husband at the time, Bob, and left with Misha. Within a week, she’d moved out of the apartment she’d shared with Bob, and begun an intense romance with Misha.

The pair would get married and stay married for more than four decades, but the marriage would be a fiercely tempestuous one, fueled by epic fights and threats of divorce — a marriage that their son describes as a toxic clash of civilizations. When he was a teenager, he says, it reminded him of Sartre’s line “Hell is other people.”

Why should readers care about a pair of strangers’ bad marriage? Who wants to hear about the small and large cruelties these two combatants visited upon each other? The thing is, in “The Force of Things: A Marriage in War and Peace,” their son brings to their story not only a sense of filial puzzlement and emotion, but also the narrative verve of a novelist combined with the unflinching eye of a seasoned journalist.

In his capable hands, their distressing tale of marital woe becomes a fascinating psychological study of two people with complicated family pasts, trying to forge identities of their own — two people with utterly different views and experiences of history.

She was an impulsive American girl, who’d grown up with a WASPy sense of social entitlement in the Midwest and who “saw the world as linear and rational.” He was a double European refugee — displaced first by the Russian Revolution and later by the rise of Fascism in his family’s adopted home, Italy; his unstable childhood left him with lasting fears and insecurities, and a view of the world as innately threatening and precarious.

Even Misha’s name and back story, his son observes, were protean: “He was born as Mikhail Kamenetzki in Moscow and died as Michael U. Stille in New York. In the family and to many friends he was known as Misha.”

As a prominent Italian journalist (who for many years served as a Milan newspaper’s man in New York), he wrote under the name of Ugo Stille. This was an “idealized self” who projected “crystalline mental clarity” and “Olympian distance,” a self in sharp contrast to the Rabelaisian man with the volcanic temper whom the author knew as his father.

Ugo Stille was originally a pen name used by Misha in Fascist Italy, the author writes, as a means of circumventing Mussolini’s racial laws, which banned Jews from publishing in newspapers. Stille means silence in German, “and it seemed a good name for a pseudonym.”

Misha’s son, Alexander, regarded him with a mixture of “fascination, admiration and horror”: he saw his dad sitting around the house in his pajamas much of the day, cranking out newspaper copy on deadline, before going out to attend a string of parties and returning home at 3 in the morning.

He also saw him bullying his mother, condescending to her as a Midwestern provincial: “You understand nothing,” he would say.

“You are an idiot!” As he came to appreciate the complexities of his parents’ marriage, the younger Mr. Stille (that is, the younger Mr. Silence) wanted to “find ways to love my father without excusing his bad behavior.” He started to learn Italian, and after college lived in Milan for two years. By getting to know his father’s friends — and comprehend the world his father knew as a young man — Alexander grew closer to his difficult dad.

It was around this time, too, that he decided to follow his father’s footsteps into journalism.

It is Mr. Stille’s determination to use his skills as a reporter to flesh out his family’s history that lends this book its depth of field and emotional ballast.

He interviews his dying mother, who is on cortisone, which seems to work on her “like a truth serum.”

He also combs through family papers, and the love letters and telegrams exchanged by his parents during their courtship.

Through such research Mr. Stille is able to recreate the worlds his parents transited. He conjures the bohemian, intellectual universe his parents knew in New York in the 1960s, when people argued late into the night about Vietnam and the Black Power movement, and writers like Norman Mailer and Alfred Kazin showed up at their Greenwich Village apartment.

He takes us further back in time to meet the flirtatious, boy-crazy girl his mother was at boarding school and college.

And he transports us to the anxious world his father’s family inhabited in Fascist Italy in the 1930s, as they desperately tried to find a way to make it to the promised land, America.

His father fell in love with his mother, in part, Mr. Stille says, because she was such “a product of the America that he had come to love”: a girl who had “the freedom, naturalness, irreverent wit and beauty of some of the women he admired in the movies of the 1930s — Rosalind Russell in ‘His Girl Friday,’ Jean Arthur in ‘Mr. Smith Goes to Washington.’ ”

His mother, Alexander Stille thinks, was unlikely to have been smitten by his father’s looks: his dad so much resembled Jean-Paul Sartre, he used to think, that “there must be a factory somewhere in Europe where they turn out these small, dark, serious, intellectual types who are born with glasses on.”

Elizabeth, however, was riveted by Misha’s intellect, his white-hot energy and the intensity with which he focused all his charms on her.

For a long time Misha didn’t tell Elizabeth much about himself — including that he was Jewish. “My mother was obviously hurt and angry,” Mr. Stille writes. “How could he possibly think it would matter to her? she wondered.” And yet, he points out, “anti-Semitism was a widespread and simply accepted attitude in the world my mother grew up in,” and those prejudices erupted on his parents’ wedding day.

It was then that Elizabeth met Misha’s father for the first time, and was revolted, in the author’s words, by what she saw: “a Yiddish-speaking shtetl Jew who had the instincts and manners of an itinerant peddler.”

Later, near the end of her life, she made this shocking confession about her feelings toward her father-in-law: “I thought to myself, Hitler killed six million Jews and he had to spare this guy!?”

Needless to say, this was not an auspicious start to Elizabeth and Misha’s marriage. And their son chronicles all the ugliness — and the happier moments too — with a journalist’s unsparing gaze, and a son’s need to come to terms with their tangled relationship.

He leaves us not just with extraordinarily powerful portraits of these terribly mismatched individuals, but also with a deeply felt understanding of how they were shaped by their very different lives and times, before fate contrived for them to meet at that party for Truman Capote.

Mr. Stille says his parents’ story makes him believe that “the zeitgeist rubs off on us,” that history attaches itself to everything, “like pollen in springtime,” affecting “the way we think and talk, the possibilities we imagine for ourselves, the choices we make or fail to make.

“Our lives,” he writes, “have meaning — above and beyond our individual qualities — because we are part of and express the times in which we live.”

A Virtual Tour of the Jewish Museum of Rome The newly designed portal of the Union of the Italian Jewish Communities (www.ucei.net) offers access to different sectors of communal institutions…