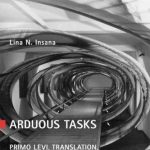 Lina Insana
Lina N. Insana is an assistant professor in the Department of French and Italian at the University of Pittsburgh.

One of twentieth-century Italy’s greatest thinkers, Primo Levi (1919-1987) started reflecting on the Holocaust almost immediately after his return home from the year he survived in Auschwitz. Levi’s powerful Holocaust testimonials reveal his preoccupation with processes of translation, in the form of both embedded and book-length renderings of texts relevant to Holocaust survival. In Arduous Tasks, Lina N. Insana demonstrates how translation functions as a metaphor for the transmission of Holocaust testimony and broadens the parameters of survivor testimony.
The first book to study Levi and translation, Arduous Tasks overcomes the conventional views of the separation between his own personal memoirs and his translations by stressing the centrality of translation in Levi’s entire corpus. Examining not only the testimonial nature of his work, Insana also discusses the transgressive and performative aspects of transmission in his writings. Arduous Tasks is a superb and innovative study on the importance of translation not only to Levi, but also to Holocaust studies in general.
‘Arduous Tasks offers a compelling and forensically argued analysis of a fascinating, largely neglected corner of Primo Levi’s work, that of translation. Intellectually ambitious and stimulating, Lina N. Insana’s study draws on insights from translation theory to read Levi’s multiple practices of translation, opening out into a wide-ranging exploration of Holocaust interpretation and the nature of testimony.’ Robert S.C. Gordon, Cambridge University
‘Insana’s book provides a brilliant and exceptionally well-researched set of case studies that take up Levi’s preoccupation with translation throughout the arc of his career as a writer and his concern that, as a translator, he was making himself and the world more vulnerable to further violence.’ Michael Bernard-Donals: Holocaust and Genocide Studies, vol 25:01:2011

Aline Sierp, History, Memory, and Trans-European Identity. Unifying Divisions, Routledge Studies in Modern European History, 2014   What is most interesting to you about memory culture in Europe? The most interesting…