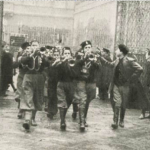 Thursday, May 1 | 6 pm
The Attitudes of Italian Jews Towards Fascism in the 1920s

Ilaria Pavan
Ilaria Pavan received her PhD in History from the Scuola Normale Superiore in Pisa. She has been a visiting scholar at the Institute of European Studies, University of California–Berkeley and a fellow at the Yad Vashem International Institute for Holocaust Research in Jerusalem, at the University of Wisconsin-Madison and at the Center for Advanced Holocaust Studies at the USHMM of Washington D.C. She has published extensively on the history of the Jews in Italy during the 18th and 19th centuries and on the legal and juridical aspects of the Fascist persecution and its aftermath. She is currently Lecturer in History at the Scuola Normale Superiore of Pisa.

Not much light has been shed on the history of the relationship between the Italian Jewish community and the Fascist regime prior to Mussolini’s antisemitic attack in 1938. The racial campaign and its tragic consequences have monopolized the studies that flourished in Italy over the last two decades and which have led to a complete reappraisal of this shameful page of the Italian history. This historiography has correctly emphasized the autonomous decision of the Fascist regime to introduce harsh antisemitic legislation, highlighting the zeal in its implementation. In so doing, the years before 1938 have been mostly treated as a long prelude to the “inevitable” 1938 turning point.  This lecture explores the relationship between the Italian Jewish Community and Fascism during the 1920s.  It brings to light consonances and affinities between aspects of the new fascist culture and the aims of the Jewish community, or at least of some of its institutional representatives and of the Zionists.

It is still the present view that after WWII the life of the small Italian Jewish Community quickly and effortlessly returned to its pre-war routine. Supposedly, after the collapse of the fascist regime and the cancellation of all the antisemitic laws, no obstacles prevented the Jews from returning to their normal lives. The reality, however, was otherwise, and the formerly persecuted experienced a bitter welcome in post-war Italy.  The policies adopted toward them by the new Republic from 1945 onward revealed themselves, as a whole, to be inadequate and contradictory. The legislative aspects regarding compensation were bad enough.  In addition there was no debate in the post-war decades about the responsibility of the Italian people in carrying out the antisemitic persecution.  Did Italian society fully face up to its antisemitic past, like other countries in Europe, or did a self–absolving attitude prevail? By analyzing the stories of the “Commission to Reconstruct Events Related to the Acquisition of Property from Jewish Citizens by Public and Private Bodies in Italy” – set up in 1998 by the Italian government to investigate the fate of Italian Jewish property – and of the introduction of the “Day of Memory” in 2001 to commemorate the Shoah, we will investigate whether this self-absolving stance is still common today.

Iván Fischer: Music as the Materialization of Emotions

It seems to me… that despite the logical, moral rigor music may appear to display, it belongs to a world of spirits, for whose absolute reliability in matters of human…