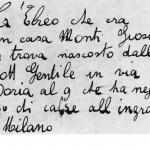 Simon Levis Sullam
Simon Levis Sullam teaches modern European history and Jewish history at Venice – Ca’ Foscari. He has taught at Berkeley and Oxford. He holds a PhD in European Social History from Ca’ Foscari and his fields of interest include the history of ideas and culture in Europe between the Nineteenth and the Twentieth century, with a particular focus on nationalisms and fascism; history of the Jews and Anti-Semitism; Holocaust history and history of historiography. After studies at Venice and UCLA (1997-98; 1999-2000), he has been a fellow of the Fondazione Luigi Einaudi of Turin (2000), a visiting graduate student at the EHESS in Paris (2002), and a research associate fellow of the Italian Academy for Advanced Studies of Columbia University, New York (2005-2006). In 2006-2008 he was an Andrew Mellon Postodctoral Fellow and a Visiting Lecturer at UC Berkeley; in 2009-2011 he was a Leverhulme Research Fellow and a Senior Visiting Research Fellow at the University of Oxord. In April 2011 he has returned to the University of Venice as assistant professor (ricercatore), thanks to funds from the Progetto Giovani Ricercatori Rita Levi-Montalcini. He is the author of Una comunità immaginata: gli ebrei a Venezia, 1900-1938 (Milan 2001) and of L’archivio antiebraico. Il linguaggio dell’antisemitismo moderno (Rome-Bari 2008), as well as the editor of Risorgimento italiano e religioni politiche (special issue of the journal «Società e Storia», 2004), and the co-editor, with M. Cattaruzza, M. Flores and E. Traverso, of an international Storia della Shoah (Turin 2005-2006, 5 vols.). This was followed by two further volumes on the Holocaust in Italy (Storia della Shoah in Italia, Turin 2010). His book L’apostolo a brandelli. L’eredità di Mazzini tra Risorgimento e fascismo, appeared in 2010 (Rome-Bari). Recently he also contributed to the volumes: Acculturation and its Discontents: the Jews of Italy from Early Modern to Modern Times (Toronto 2008); Mazzini and the Globalisation of Democratic Nationalism, 1830-1920 (Oxford 2008); Cultural Representation of Jewishness at the Turn of the 21st Century (EUI Working Papers 2010, http://hdl.handle.net/1814/14045).

What is a genocide and how does it occur? This is a question that we Italians can and should ask as Remembrance Day (January 27th) approaches again this year. We should ask ourselves if what we remember and how we remember is enough. And, we should take into consideration the sense of saturation that this institutional recurrence can provoke in some of us. Can we try to ask some new historiographical questions this year, seventy years after the beginnings of the deportation from Italy? Is the category of genocide useful for the historical interpretation of the Holocaust in Italy, and specifically of the Italian participation in the deportations and extermination of Jews in 1943-45?

In recent years the best historiography on the Holocaust has been developing in growing relationship with research on genocides (from the Armenian to the Cambodian genocide, from Rwanda to the former Yugoslavia). This has allowed us to compare, and at the same time, to better define and contextualize the “historical singularity of Auschwitz.” It has also cast new light on the different national contexts and on the dynamics in which the “Final Solution” was carried out: to compare does not mean to dwell on similarities but to highlight specificities.

Twenty-five years ago, the historian of Fascism Renzo De Felice said in an interview with Corriere della Sera, that Italy was outside the “shadow of the Holocaust” – and this phrase became notorious. Such a view – still largely held as credible among the general public and even among historians – can hardly be considered tenable today, especially if Remembrance Day, as established by Italian law in 2000, is truly to make sense. De Felice wrote, “Italian Fascism is immune from the charge of genocide.” With this precise formula he meant to exclude not only Italian liability, but even Fascist responsibility in the Holocaust.

The first and strongest refutation of De Felice’s position came a few years later with the publication in 1991 of the monumental book, Il Libro della Memoria (The Book of Memory), edited by Liliana Picciotto for the CDEC Foundation (Fondazione Centro di Documentazione Ebraica Contemporanea). The Libro della memoria provided a list of names and biographical information about the individual fate of approximately 8,000 Jews who were victims of the Holocaust in Italy. The book also contained precise details on the arrest of Jews carried out by Italians between 1943 and 1945. In 1995 David Bidussa drew on these data – and the numbers until now neglected, revealed that the arrests were mainly carried out by Italians – for his short but influential study, aimed precisely at deconstructing from a historical perspective “the myth of the good Italian”. Drawing on, among other evidence, the number of arrests in Picciotto’s work, Bidussa revealed a part of Italy’s history – the period of Fascist extremism and collaborationism of the Republic of Salò, from 1943 to 1945 – that resulted not only in the suppression of the Jews’ rights, but also in the direct Italian participation in the extermination.

Since 1988, Michele Sarfatti’s research on Mussolini’s racism and on Fascism and the Jews, together with a series of studies on the Italian path to anti-Semitism (which still continue), have helped rewrite a history that clearly did not begin only in 1938, at German instigation, nor can it be understood reductively as the “Nazification” of Italian Fascism, as some also recently still claim. It would be enough in this regard to turn one’s attention, as some historians have been doing for a while, to the history of Italian colonialism, which began well before Fascism, so that we can understand that we Italians have had no need of instructions or models when we chose to use violence.

But what can we achieve today by analyzing the deportations of Italian Jews between 1943 and 1945, the arrest and imprisonment of thousands of young and old people, women and children, within the context of the international historiography on genocide?

First of all, historians concur today that genocides do not take place exclusively in colonial or ex-colonial contexts or in conquered territories. We cannot imagine them as taking place only in distant places, for different reasons unfamiliar to us (Cambodia or Rwanda, or even the Armenian-Turkish border or Tito’s decaying regime with the rising inter-ethnic conflict in post-1989 Yugoslavia). Indeed, there is an intrinsic relationship between intimacy and genocide: genocide actually strikes our next-door neighbors – thus it can involve us and it does involve us all – as Jan T. Gross has shown in his book, Neighbors (2001), dedicated to the massacre of the Jews of Jedwabne by their Polish compatriots in 1941, before the arrival of the Germans.

But on the Italian territory, one might object, no massacre took place; not at the hands of Italians. This is generally true if we consider only physical extermination by mass shooting – as in the first phase of the Holocaust in Eastern Europe (readers may recall on this, for instance, Christopher Browning’s Ordinary Men, 1996) – or the industrial extermination in gas chambers that took place in the heartland and at the hands of the most civilized, Judeo-Christian, Europe.

However, historians of genocide such as Donald Bloxham or Jacques Semelin have explained that, in addition to detention in prison camps and consignment of people in the hands of “willing executioners” (or even consignment to an Eichmann-style “desk executioner”), preexisting behavior can become genocidal acts, especially in the context of war. This behavior includes the identification, arrest and separation of groups on the basis of ethnicity, religion, social difference or other criteria (and let’s not neglect perceived physical or mental differences, one of the first criterion for the extermination policy that started the Holocaust in Europe). Acts of this nature clearly concerned the tens, hundreds, perhaps thousands of Italians who contributed to the design, organization and implementation, on political, bureaucratic and police bases, of the “Final Solution of the Jewish question” in Italy from 1943 to 45, after the Italian Social Republic had declared the Italian Jews “foreigners” and “enemies.”

Ordinary Italians in the police, the armed forces and among the volunteers of the revived Fascist Party, but also ordinary citizens who were simple collaborators and informers (as Mimmo Franzinelli documented in an essay included in La Shoah in Italia, 2010, 2 volumes by various authors), got up one morning in the autumn of 1943 or the winter, or the summer of 1944, shaved or did their make-up (there were women executioners directly involved), drank their coffee, greeted their families and then went out to hunt for Jews who had been their next-door neighbors, their classmates, their colleagues (perhaps their friends?). They seized property, imprisoned Jews, transferring them to transit camps and delivering them, finally, into German hands. They sent these Jews, not to some “unknown destination,” but consciously, to certain death, as Liliana Picciotto began to show in her L’alba ci colse come un tradimento (Dawn Caught Us As a Betrayal, 2011).

Although it is a duty to remember the thousands of Italians who saved their fellow Jewish citizens, individual stories of ordinary Italians who participated in the genocide – Italy’s history inside the shadow of the Holocaust – remains to be written. It is a process that, in many ways, began at the very earliest with the promulgation of the Racial Laws in the autumn of 1938, thus involving thousands of Italian “executioners,” even if what eventually developed out of those laws was not already written into them.

This is why we commemorate Remembrance Day and – I write as a historian first and foremost to my fellow historians: the seventy years since those events and the twelve years since the promulgation of Remembrance Day in Italy have not been enough to show us the urgency and necessity of writing that particular history; the history of “ordinary” Italians and genocide: our history.

Simon Levis Sullam teaches modern history at the Ca ‘Foscari University of Venice and is the author, among other works, of L’archivio antiebraico. Il linguaggio dell’antisemitismo moderno (Laterza 2009) and the co-editor of Storia della Shoah (UTET 2006-2007) and La Shoah in Italia (2010)).

Centro Primo Levi congratulates Sandro Gerbi On November 21st, the cultural historian and journalist Sandro Gerbi will be awarded the 2014 Premio Biella—a book prize devoted to the intersections of…