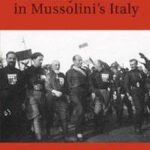 Michael Ebner
Michael R. Ebner is Assistant Professor of History at the Maxwell School of Citizenship and Public Affairs, Syracuse University. He is the 2000–1 recipient of the Rome Prize in Modern Italian Studies from the American Academy in Rome. From 2001 to 2002, he was a Whiting Fellow at Columbia University. He is the author of many essays including: The Political Police and Denunciation during Fascism: A Review of Recent Historical Literature, Journal of Modern Italian Studies 11:2 (June 2006), 209-226 The Fascist Archipelago: Political Internment, Exile, and Everyday Life in Mussolini’s Italy, 1926-43, (Columbia University: Ph.D. Dissertation) The Persecution of Homosexual Men under Fascism 1926-1943, in Perry Willson (ed.), Gender, Family, and Sexuality: The Private Sphere in Italy 1860-1945 (London: Palgrave Macmillan, 2004) The Police, the Party, and Everyday Coercion in Fascist Italy, at European Social Science History Conference, Lisbon, Portugal, February 26 – March 1, 2008 Ordinary Vexations: Institutions of Coercion and Violence in Everyday Life under Fascism, September 2004, Conference on Imprisonment in Italian Culture, University of Connecticut The Persecution of Homosexuals under Fascism, 1926-1943 November 2002, Association for the Study of Modern Italy, London Deviance and Exile in Fascist Italy’ January 2002, Institute of European Studies, University of California, Berkeley
Between 1926 and 1943, the Fascist regime arrested thousands of Italians and deported them to island internment colonies and small villages in southern Italy.

Ordinary Violence in Mussolini’s Italy analyses this system of political confinement and, more broadly, its effects on Italian society, revealing the centrality of political violence to Fascist rule. In doing so, the book shatters the widely accepted view that the Mussolini regime ruled without a system of mass repression.

Moreover, by promoting denunciatory practices, the regime cemented the loyalties of “upstanding” citizens while suppressing opponents, dissenters, and social outsiders. Fascist repression was thus more intense and ideological than previously thought and even shared some important similarities with Nazi and Soviet terror.

In almost two decades Benito Mussolini’s fascist dictatorship deported 15,000 Italians to island internment colonies and small villages in southern Italy. This institution (confino di polizia) and, more broadly, the experiences of Italians affected by it, is the subject of this dissertation. The dissertation explores three interrelated phenomenon, arguing that police-state violence and coercion were central to Fascist rule. First, it provides a comprehensive history of the network of internment colonies and exile villages, arguing that the structure and purpose of the confino system were highly variable and evolved over time.

Early on, the regime manipulated the system’s appearance by assigning prominent antifascists to relatively hospitable islands in the Mediterranean. Meanwhile, Fascist militiamen abused the detainees; less fortunate victims, mainly poor Italians, languished in decrepit communal barracks; and the detainees’ families suffered economically. Finally, although only 15,000 Italians were sentenced to political detainment, the regime relied on an array of more subtle yet insidious sanctions, which exerted pressure on vast segments of the population to conform politically. Second, through a random sample conducted on the ‘personal files’ of the detainees, held at Rome’s Central State Archive, the dissertation demonstrates that the majority of Fascism’s victims were not antifascist militants but, rather, “politically compromised” individuals, “social outsiders,” and “ordinary Italians.”

The dictatorship began by persecuting militant antifascists, but in the mid-1930s, coinciding with the invasion of Ethiopia, behaviors ranging from homosexuality to criticizing Mussolini were construed and punished as political offenses. Third, through micro-historical reconstruction of the events and contexts which led Italians to be sentenced to political internment or exile, the dissertation examines how official coercive policies were implemented on the ground, arguing that many ordinary Italians and Fascists assisted the police. In Italian communities, institutionalized coercion was directed against groups that were already feared or maligned; for the regime, this use of police-state power served to attract supporters, intimidate enemies, tighten its authoritarian grip on society, and advance the Fascist political and ideological program.

Yafuzu Oyevecha sung by the chief rabbi of Padua Rav A. Locci and B. Sacerdoti. Pictures of Italian Synagogues.