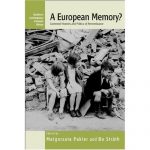 An examination of the role of history and memory is vital in order to better understand why the grand design of a United Europe-with a common foreign policy and market yet enough diversity to allow for cultural and social differences-was overwhelmingly turned down by its citizens. The authors argue that this rejection of the European constitution was to a certain extent a challenge to the current historical grounding used for further integration and further demonstrates the lack of understanding by European bureaucrats of the historical complexity and divisiveness of Europe’s past. A critical European history is therefore urgently needed to confront and re-imagine Europe, not as a harmonious continent but as the outcome of violent and bloody conflicts, both within Europe as well as with its Others. As the authors show, these dark shadows of Europe’s past must be integrated, and the fact that memories of Europe are contested must be accepted if any new attempts at a United Europe are to be successful.

Section II: Towards a Europeanization of the Commemoration of the Holocaust
11. Remembering Europe’s Heart of Darkness – Legacies of the Holocaust in Post-war European Societies Cecilie Felicia Stokholm Banke
12. Holocaust Remembrance and Restitution of Jewish Property in the Czech Republic and Poland after 1989 Stanislaw Tyszka

13. A Europeanization of the Holocaust Memory? German and Polish Reception of Europa, Europa (1990) by Agnieszka Holland Malgorzata Pakier
14. Italian Commemoration of the Shoah. The Construction of a Survivor-oriented Narrative and its Impact on Italian Politics and Practices of Remembrance Ruth Nattermann
Section 3. Coming to Terms with Europe’s Communist Past
15. Managing the History of the Past in the Former Communist States Arfon Rees
16. Eurocommunism. Commemorating Communism in Contemporary Eastern Europe Péter Apor
17. The Memory of the Dead Body Senadin Musabegovic
18. Neither Help nor Pardon? Communist Pasts in Western Europe Kevin Morgan
Section 4. Coming to Terms with Europe’s Colonial Past
19. Politics of Remembrance, Colonialism, and the Algerian War in France Jan Jansen Chapter
20. Memory Politics and the Use of History: Finnish-speaking Minorities at the North Calotte Lars Elenius Conclusion: Nightmares or Daydreams? A Postscript on the Europeanization of Memories Konrad H. Jarausch Bibliography