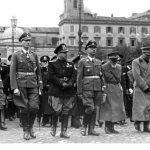 Jonathan Dunnage, The Italian Police and the Rise of Fascism, Cambridge University Press, 1998

Jonathan Dunnage
Dr. Dunnage teaches at Swansea University. He is a is a social historian of twentieth-century Europe with particular interests in Italy, right-wing dictatorships and policing. His publications focus on the history of policing and police culture, particularly in fascist regimes and in relation to regime change. His supervisory research areas include History of policing and police culture; Italian fascism; history of military occupation; history of regime change. I have supervised successful doctorates on the Allied occupation of Sicily, and law and order in Allied-occupied Italy. Dr. Dunnage is engaged in research on the policing of fascist Italy and the lives and careers of policemen who served under Mussolini. This has involved two British Academy-funded projects: a case study of Siena (2003) and, more recently, an examination of personnel of the Italian Interior Ministry Police against the background of the attempted ‘fascistization’ of the state. His publications include: Mussolini’s Policemen. Behaviour, Ideology and Institutional Culture in Representation and Practice, Manchester University Press Twentieth Century Italy. A Social History, Harlow: Pearson Education, 2002. The Italian Police and the Rise of Fascism.  A Case Study of the Province of Bologna, 1897-1925, Westport, CT: Praeger, 1997

Based on research using official documents, this account of the role of the police in the rise to power of Mussolini reveals the inner workings of the Italian Liberal policing system, the tensions between its different branches, and problems related to the shifting demands of its political masters.

Explanations of the support that the Italian police gave to the Fascist movement are to be found not only in the profound social, economic and political transformations characterizing the years immediately following World War I, but also in Italy’s post-unification administrative system.

Police support for the Fascists was often morally, if not physically, coerced by the Fascists, while administrative ambiguities and weaknesses hampered any police attempts to repress the movement. The rise of Fascism and its support from the police was the logical end result of a tradition of “private solutions” to policing problems. This study also looks at the relationship between different branches of the police and between central government and periphery state organs in dealing with political developments.

Rivista di Studi Italiani, Review by Ruth Ben Ghiat (New York University)
Covering three of the most tumultous decades in modern Italian history, this brief book consists of several interwoven narratives centered on the province of Bologna. The subject of policing provides a perspective on the rise of fascism and on the political consequences of administrative practices that reflected the difficult relationship of the central government and its peripheral powers.

Complicating older reductive views that an authoritarian bent almost automatically predisposed police support of Italian fascism, Dunnage provides a nuanced account of the police during fascism’s rise that highlights how both long-term problems and historical contingencies conspired to prevent any widespread police repression of squadrist brutalities.

From the Unification period, the Italian police forces inherited a split identity – the carabinieri, which were the legacy of Napoleon’s occupation, coexisted uneasily with the Interior Ministry’s guardie di città – and a culture of preventive policing that allowed repressive measures such as surveillance and internal exile (domicilio coatto, the forerunner of the fascist-era confino) merely on the basis of suspicion.

At the same time, the police was chronically understaffed and illequipped, leading to a sense of insecurity among the rank-and-file that grew worse with the onset of widespread labor agitations. With the 1890s Molinella strikes as his example, Dunnage shows how the police often responded on the side of landlords and employers, inaugurating tactics that would continue in the face of the non-intervention policies Prime Minister Giolitti adopted after 1900 in his quest for a rapprochement with the Left.

At work here was also another inherited and ongoing issue: the existence of cliental and local power networks that mitigated the authority of the central government and which would take on another political dimension with the formation of agrarian bossbacked fascist squads in the countryside after 1919.

Another manifestation of the perceived insufficiences of police and state power was the creation of private armed patrols (pattuglie cittadine) which were sometimes used by police authorities against the socialists, as during the 1906 general strike, and which constitute an interesting forerunner to the semi-official policing arrangements favored by the early fascists. Indeed, one of the author’s conclusions is that the Italian administrative system gave its officials enough autonomy to allow them to develop cliental relations with local elites who were then able to gain political influence outside of electoral channels. After World War I, this decentralized power structure favored the development of alliances among the police, the fascists, and their agrarian backers, all of whom were conditioned to accept arbitrary methods of dealing with political enemies and other undesirables. The author makes a convincing argument that “fascism was the culmination of a string of civilian and paramilitary patriotic and antisocialist movements supported and financed by local social elites to be used rather than opposed by the state” (pp. 168-69).

The Italian Police and the Rise of Fascism also provides a historical context for understanding the political context that shaped and produced such arrangements. Ambiguity is the key term here. Dunnage stresses that the continuous shifts in governmental policy with regard to the socialists and their labor agitations confused many in the police corps.

Alternating repression with prevention, non-intervention with mediation, the Italian government offered no clear policy or orientation that could be communicated to a mass of often ill-educated policemen. Dunnage concludes in fact that Giolitti’s policing strategies failed in part because he failed to introduce a “new psychology” of tolerance and openness towards workers and working-class causes among those who were charged with policing socialist demonstrations. After World War I, as fascist squads began to trash Northern towns, this lack of clarity would have serious consequences; Dunnage contends that many rank and file policemen would have combatted the fascists had they received unambiguous directives to do so. As he concludes, “apparent police indifference to fascist violence was, in many cases, indicative more of hesitancy at ambiguous government policies than of support for the movement itself (p. xvi). Overall, Dunnage does a good job of conveying the dilemmas faced by the liberal Giolitti, whose double-sided strategy of appeasement is captured in his habit of increasing police pay and bonuses at the same time he approved worker welfare provisions.

More indirectly, the author also communicates the difficult situation faced by the socialists, whose continued expansion was met with a wall of hostility from Italy’s political and economic elite. These anti-socialist feelings take center stage in the later chapters on the rise of fascism. An interesting subsection on Cesare Mori, prefect of Bologna from February 1921 to August 1922, reveals the open antisocialist bias which permeated the police force and which hindered the attempts of Mori and others to forestall a further development of the blackshirt movement.

The evidence Dunnage has culled from the archives reveals the myriad means local police authorities obstructed the (often themselves ambiguous and half-hearted) directives from Rome designed to dismantle the squads and salvage state authority. His analysis of the reasons behind this police support points up the decimation and loss of prestige suffered by the police in the wake of the war and the successes of the socialist biennio rosso, (“red years”, marked by demonstrations, factory occupations, and an electoral swell) as well as the prevailing disillusionment with the weakness of the liberal state. In this analysis, the division within police forces over support for fascism (the carabinieri tended to be more pro-blackshirt than the guardie) was merely one more aggravating factor in a crisis of authority that tested political allegiances, personal loyalties, and notions of national defense and civic duty.

The drama and emotional tension that surrounded the formulation of police policy are not always fully conveyed in this book, which also could have benefitted from more extended personal portraits such as that devoted to Mori. Reading the wonderful archival material in the book’s appendix, I was left with the regret that it had not been integrated directly into the narrative so that readers could hear the individual voices of these policymakers and policemen directly. Questions of style aside, though, Dunnage has made good use of his evidence, which confirms and adds to the conclusions of other local studies by Anthony Cardoza, Alice Kelikian, and Paul Corner as well as classic general accounts such as that by Adrian Lyttelton: in this sector, as in many others, fascism appealed less on its own terms than as a vehicle for the recuperation of authority and the mirage of social order. Drawing on a strand of authoritarianism that ran through the liberal period, a culture had been created by 1922 which, tragically, deemed violence and the suppression of political opposition an acceptable price to pay for the defeat of the Left and the restoration of “decisive” leadership in Italy.

Sandro Gerbi in Conversation with Alessandro Cassin AC: You have vast experience in biographical writing of different types, however writing about oneself is a different enterprise. How did you conceive…