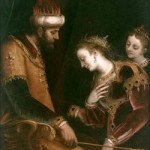 Rabbi Gianfranco Disegni
Rav David Gian Franco Di Segni studied at the Yeshiva of Strasbourg. He obtained smicha from the Italian Rabbinical College of Rome, where he currently teaches. He received a degree in Molecular Biology from Hebrew University in Jerusalem, and a Ph.D. in Medical Genetics from La Sapienza University in Rome. He is the head researcher at the Cellular Biology Institute of the Italian National Research Center in Rome. Rav Di Segni has published several books and articles on scientific and Jewish topics. He also coordinated the publication of the new Italian edition of the Mishna, for which he Translated the Tractate of Berakhot. He is a member of the Italian National Committee for Jewish Bioethics, and the Ethical Committee of the Jewish Hospital of Rome.
Courtesy www.morasha.it

The feast of Purim commemorates an event which took place 2500 years ago in Persia, during the reign of Assuero.  The Book of Esther tells us that Haman, the king’s wicked counselor, wanted to exterminate the Jewish people – men, women and children.  Through the intercession of Queen Esther, a beautiful young Jewish woman who had married the king without revealing her Jewish origins, and her uncle Mordechai, the leader of the Jewish community, the Jews were saved and the counselor and his cohorts were punished.  In memory of this marginal escape from danger, the feast of Purim was established – the word itself being derived from the Hebrew term for “fate” or “lots”.  The perfidious Haman apparently chose a date for the massacre by casting lots.

Characterized by an extremely joyful spirit, Purim’s festivities are to last from morning into the night.  Written by hand on parchment, the Megillah – or The Book of Esther – instructs readers to make donations to the needy, to gift food and drink to friends, and to orchestrate a special banquet with abundant wine and special treats.  A carnival of sorts, the party calls for merrymaking to the point of confusing the blessed Esther and Mordechai with the hateful Haman.

Finally, children dress in costume in remembrance of a felicitous reversal of fortune.

Purim is distinct from other biblical feasts insofar as it does not have a specifically religious dimension nor is it associated with a prescribed religious ritual.

It is a masquerade party in every sense: for the costume element as much as for the hidden, or “masked”, spiritual dimension.  The name Esther is derived from the Hebrew word hastèr which means “to hide”.

Thus, the clandestine Jewish queen, who was chosen by God and destined to her high office, is integral to the theme of hidden meanings.  Likewise, the divine itself is elusive – Esther is the only book in the Bible in which the name for God never appears.

The allusions to Divinity are both subtle and nuanced.  In one important example, Mordechai incites Esther to intercede on behalf of the community telling her that if she refuses, “salvation will come in any case, from some other place”.

Given the ‘earthly’ features of the feast of Purim and the emphasis on concealed meaning, it is even more interesting to consider the analogy proposed by the masters of the Kabbalah and adopted by the Chassidic rabbis.  They allowed that the feast of Purim was strictly tied to Kippur, or the day of fasting and atonement.

Kippur, which means “expiation”, is called kippurìm in the Bible, the plural form of Kippur.  It is fascinating to note however, that kippurim is similar to ke-purim, which in Hebrew means “like Purim”.  These similarities inspired the Kabbalists and the Chassidic rabbis to assert that Kippur is like the feast of Purim and moreover, that Purim ranks above Kippur in importance.

But how is it possible to draw an analogy between a feast as mundane as Purim and Kippur, the holiest day on the Judaic calendar?

How is that Kippur, – which requires 25 hours of abstention from food and drink and hours in the Synagogue, engaged in one of the most extensive prayer rituals of the year, – can be compared with the carnival and abundance of Purim?

What connection can there possibly be between a day which calls for revelry and drunkenness to the point of confusing good and evil and “the Day Atonement” which demands not only acknowledgment of sin and iniquity but also penance for it?

Let us attempt to respond to these questions (and I underscore “try”). Beyond the linguistic resemblance between Purim and Kippurim, there are other correlations to be made.

Purim also involves a fast – “Esther’s fast” – which precedes the feast day and commemorates the 3-day period of privation undertaken by the Persian queen and her ladies-in-waiting in order to convince Assuero to call off the slaughter.  And likewise, Kippur has its banquet feast – in fact, there are even two of them – used to celebrate the end of the day of fasting.

Further, Kippur integrates a “masking” or masquerade of sorts insofar as one wears the tallit, or the prayer shawl, into the evening (and not just during the day as is customary throughout the rest of the year.) Moreover, Kippur inspires many to dress in white as a symbol of purity.  Finally, the echoes of fate and destiny in the word “Purim” can be found in the Day of Atonement ritual as well – the scapegoat was selected by casting lots.

Like Purim, Kippur also commemorates a brush with destiny. The ritual recalls God’s pardoning of the Jewish people for their worship of the golden calf.  This idolatry – already the gravest of sins – was even more serious since it followed the presentation of the Ten Commandments on Mount Sinai.  And so, in a first “Kippur” in the Sinai desert, the Jews received the second Tablet of the Law as a sign of God’s forgiveness.  (Moses had shattered the first tablets when he discovered his people in fervent devotion to a false idol.)  In the same way, after their narrow escape in Assuero’s Persia, the Talmùd affirms, the Jewish people once again embraced God’s law and authority.

But there is an even more important comparison to be made between Kippur and Purim.  We might say that the two holidays complement one another. Kippur inspires the faithful to abandon the material world, reminding us that “man does not live on bread alone but on every word that comes from the mouth of the Lord” (Deuteronomy 8:3).

Meanwhile, Purim encourages us to forget the intellectual and spiritual aspects of being and even to ‘lose’ ourselves in celebration and revelry.  This last lesson – that intellectual presumption can be dangerous – is as important as the admonishments against a purely material existence inherent in Kippur.

Says the Lord God, through the Prophet Isaiah (55:8): “My thoughts are not your thoughts”.  Jewish mystics affirm that absolute communion with the Divine, with the pure spirit and the “thoughts of God”, is only possible once one has emptied his or her mind and conscience entirely.

Purim invites us to embrace intellectual humility. Relinquishing our spiritual dimension – even if only for a day, may- in the end – prove to be more difficult than forgoing our material side.  For this reason, the mystics tells us, Purim is more important than Kippur.

Auschwitz Report Paperback, Verso; Reprint edition (March 3, 2015) Among the first written accounts of the concentration camps—a major literary and historical discovery. While in a Russian-administered holding camp in…