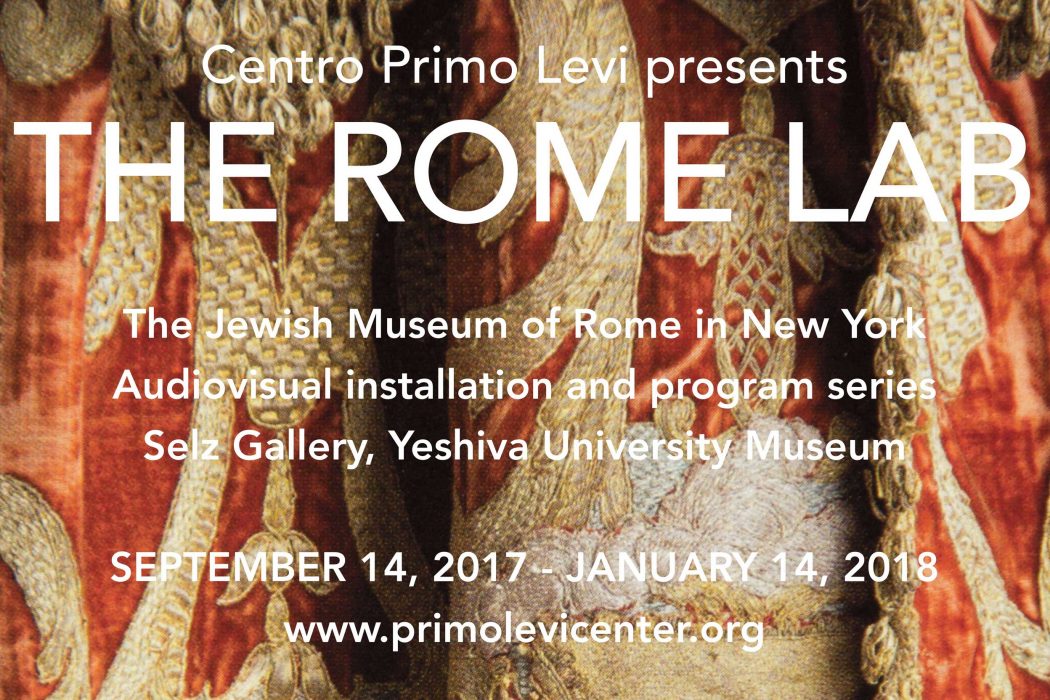 The Rome Lab presents a series of talks dedicated to the history of  the Roman Jews and of  the twenty-two centuries relations between Rome and Jerusalem. The public, students and scholars are welcome to join and participate in the conversation. All programs are free.

Delving into the history of a community that traces its roots to antiquity and to the formative centuries of European diasporic Judaism, this series invites the public to reflect upon the relation of a minority to empire and dominant religions, compliance and resistance, the transformation of Judaism into a Western culture.

The historic and symbolic relation of Judaism to Rome developed against the background of major revolutions: the partition of the Roman Empire, the rise of Christianity as state religion, the confrontation with Islam and the Crusades, the expulsion of Jews and Muslims from Spain, the invention of the printing press and portable fire arms, and the formation of modern nation states. Throughout the centuries, the images of the Roman Forum and the Temple of Jerusalem, interconnected by narratives of war and peace, continued to be appropriated and transformed by Jews and non-Jews.

How did Mediterranean Jews of the 1st century see themselves, the empire, and their land of origin? What was their status as minority? What kind of interaction and negotiation on religious authority existed between the Jewish elite of Judea, the Roman community and their Babylonian counterpart? And how did relations within the Jewish

diaspora change after the Roman’s destruction of Jerusalem, or after the eclipse of the Sasanian Empire and the rise of Islam?

Hebrew University scholar Paula Fredriksen will open the series with a talk entitled A Tale of Two Cities: Rome and Jerusalem. The juridic status of the Jewish minority in the Roman Empire and its progressive modifications will be the topic of a conversation between Alessandro Saggioro of University of Rome La Sapienza, and Seth Schwartz of Columbia University. A session with Amram Tropper (Ben Gurion University), Ron Naiweld (French, National Centre for Scientific Research) and Shai Secunda (Bard College) will explore the rabbinical elite’s views of the Romans and the foundational story of Yavneh.

In late antiquity and early Middle Ages, the paradoxical image of Rome as a repository for “Jewish” artifacts and Jewish past is analyzed by Princeton University scholar Ra’anan Boustan to illuminate the strategies by which Roman Jews and Roman Christians rooted their quite distinctive claims on the ancient past in the terrain of the shared city.

A reading of the work of Immanuel Romano and his real or imagined relation with Dante Alighieri, by Ann Brener (Library of Congress) and Isabelle Levy (Columbia University) will offer further insight on the dynamics of cultural interaction within the Roman world.  Poetry will also be the focus of a lecture by Daniel Leisawitz (Muhlenberg College), who will take a retrospective look at the language of Roman Jews, Judeo-Roman, and its traditions.

By the time Spanish Jews were expelled from their country and Roman Jews segregated in the ghetto, the world had changed dramatically, Christianity was facing internal schism, Jerusalem, long contended by “Moors” and “Knights,” was ruled by the Ottomans and the Temple was inscribed in philosophical, scientific, and national narratives.

A presentation by Giuseppe Veltri of the University of Hamburg will focus on the symbolism of the Temple in the Jewish Renaissance.

Serena Di Nepi (University of Rome La Sapienza) will accompany the public through the early years of the ghetto, the conflicted arrival of Spanish Jews to Rome and the shaping of modern ideas on Jewish self-governance. A panel with Michela Andreatta (University of Rochester) will take on Ariosto’s Orlando Furioso, the last grand epic of the premodern world, in the context of its Jewish readership and the definition of otherness. Back in Ottoman Jerusalem, presented by Asher Salah (Bezalel Academy), the adventures of two Roman Jewish travelers let us capture a glimpse of the social and spiritual turmoil that enveloped the modern world at the dawn of a new era.

Finally, closing the where the project began, with a reflection on the Arch of Titus, Marina Caffiero of the University of Rome La Sapienza, will discuss it in two historical

contexts relevant to the Jews of Rome: the massive restoration of 1821 by Giuseppe Valadier, and its use in the ceremonies of the papal installation.

All sessions are held at the “Rome Lab” at Center for Jewish History, 15 West 16 Street.

except for the session of November 21 which is held at the Italian Cultural Institute, 686 Park avenue. Most week-days events will be held between 6 pm and 9 pm. The exact time will be announced in the next release.

A Tale of Two Cities: Rome and Jerusalem.

“Io so’ jodìo romano”: Notes on the Jewish-Roman Dialect.

The Temple in Renaissance Imagination.

Rome and the Jews at the Times of the Ghetto.

To be a scribe in Italy: A Century Old Legacy and Traditions of Roman Jews: Life and Religion.

Publishing and Culture: The Alchemy of Ideas

Since the days of Gutenberg and probably long before, publishers have depended on what was most popular, and therefore profitable, for their existence. From breathless, half-imagined travelogues to more salacious…