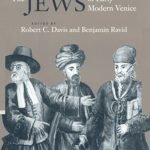 Benjamin Ravid
Benjamin Ravid is Jennie and Mayer Weisman Professor of Jewish History at Brandeis University. His scholarship centers on a wide range of issues arising from the experiences of the Jews of Venice, such as the attitude of the religious and secular authorities toward the Jews, their legal status, economic activities, communal structure, living quarters.

Here is a collection of essays on a theme, Jews in early modern Venice, that actually coheres together. Davis begins by introducing the reader to the Jewish ghetto of Venice at the moment of is dissolution in 1797. With the passage of control of the lagoon city to the Austrians, restrictions on Jewish activities were renewed. Davis quickly outlines the history, composition, and role of the Jewish community in one of early modern Italy’s most storied city-states. The twelve informative essays, covering three hundred years of history, are grouped according to three themes: settlement, ethnicities and identities, and cultures.

In David Ravid’s article, relying on records of communal legislation concerning the settlement of the Jewish community, the reader is provided an overview of the community’s establishment. We learn that the origins of Jewish residence extend back no further than the sixteenth century, with the designation to the Jews of a slice of land formerly occupied by a copper foundry (geto). Hence the origins of the term “ghetto,” as the most evocative generic name for a section of a city: the pejorative meaning is widely recognized–a ghetto is never a pleasant place to live, and its inhabitants are always viewed as marginal. Previously, Jews had not been allowed to permanently reside in Venice but lived instead in the nearby mainland city of Mestre. The New Ghetto of 1516 was walled-in; further stigmatization came with the assignment of a yellow circle to be worn on the sleeve or a yellow or red cap for the head. The Jews were tolerated because of two services they performed for Christians: as pawnbrokers, and in providing contacts for long-distance trade. Although this toleration endured in the long run, it actually hung by a thin thread extending only to the next favorable government decree.

Donatellea Calabi’s “City of the Jews” fills Ravid’s documentary space with people and buildings, both of which were packed together within the combined walls of the Old and the New Ghetto. Calabi provides a thick slice of life, describing food shops, apartment buildings (and renovations), festivals, ceremonies, and cemeteries, all packed within a space that became so famous that visitors to Venice could not leave without recording their views of the Jewish ghetto, much as though it were the main attraction in a museum of Natural History. Calabi’s descriptions bulge with vitality but we are left to sense the crowdedness and squalor for ourselves.

The venerable Brian Pullan’s article on Jewish banks and the monti di pieta (literally “mountains of piety” but meaning essentially “lending banks” operated by Christians) heads the section on ethnicities and identities. These city-owned lending banks were trumpeted by the Observant Franciscans as a way of removing the reasons for tolerating Jews in the midst of Christians. Venice witnessed only two attempts to form this type of bank in the sixteenth century, both of which failed. Stresses did occur between the varieties of Jews–German Jews, Ponentine or Sephardic Jews, and the Levantines–over permissible rates of interest. But toleration of Jews by Venetian government continued, as they said, to avoid a greater sin (usury, a form of avarice, viewed as the worst sin by the late medieval period) by tolerating a lesser one (the Jewish presence among Christians). Benjamin Arbel uses letters and decrees of the Venetian government to explore the participation of Jews in trade to the eastern Mediterranean from the fifteenth century. The challenge from the Turks caused Venice to develop a new trading axis between Ancona and Ragusa (modern Dubrovnic). Wars and the expulsion of Jews from Spain brought more Jews into Venice, leading to the establishment of the Ghetto Vecchio (more recently established than the Ghetto Nuovo), peopled mainly by Levantine Jews. By the late sixteenth century a number of so called Ponentine or western Jews (from Antwerp and Ferrara, including Marranos and converted Christians) also came to settle in Venice. One of them, the well-known Daniel Rodriga, was crucial in helping Venice create a prosperous new port at Spalato centered on Romania in this period. With this and other essential economic contributions, Jews moved from the repudiation of medieval times to continual occupancy from the sixteenth century through the fall of the republic.

Pier Cesare Ioly Zorattini is an expert on the Inquisition and Jews in Venice. It is a myth that the Inquisition was a single, Europe-wide institution under centralized control from Rome. For Venice, the sixteenth-century version, established in 1540 with mixed lay and ecclesiastical makeup, was preceded by a medieval counterpart, founded in 1249, and disbanded in 1423. Zorattini primarily investigates the procedural operation of the courts in his “Jews, Crypto-Jews, and the Inquisition.” Categorization of the cases reveals that 4.7 percent, or 2,910 cases, dealt with Jews or Judaism. Most of these cases were centered on “new” Christians from Iberia, whose sincerity was widely mistrusted, and who were charged with practicing Judaism. There were also prosecutions of Jews for witchcraft, sorcery, and magic. Punishments were very lenient, totally in line with the government’s protection of the Jewish community. (It is interesting how, as Europe’s governments democratized, they went from being protectors of the Jews to being their persecutors.) David J. Malkiel, examines the structure and operation of the ghetto’s governmental structure in “The Ghetto Republic.” Called the Universita, in many respects government of the ghetto, led by a council of elders buttressed with large and small councils modeled on the form of Italian governments, constituted a state within a state. It regulated matters of religion, taxation and justice. To a great extent it also moderated conflicts between the various Jewish “nations” inhabiting the ghetto.

Shifting focus from institutions of government to family structures, Howard Adelman pieces together from scarce legal sources a picture of the lives of Jewish women in and outside of the ghetto. The lives of women were not circumscribed only by rabbinical authority but were also subject to the constraints and opportunities of Christian society. Often, the best sources for this period on the lives of women are civil cases involving inheritance. Reconstruction of sources such as this reveal the activities and movements of Dona Gracia Nasi, a rich woman, who moved from Iberia to Venice, and Sara Coppio Sallam, a poet of the Renaissance. Wills are another source that sheds some light on the lives of less wealthy and exceptional women. Women bequeathed their goods and money to favor certain members of their families, especially females. Interestingly, the records seem to establish the existence of Moorish and black Jewish women. Secular government limited rabbinical authority, and Christians and Jews interacted much more than might generally be assumed, subverting the whole purpose of the ghetto.

Explorations touching on the broad theme of Culture comprise the final section. Robert Bonfil’s “A Cultural Profile” examines the role of Venetian and Italian Jews generally in the formation of the socio-cultural identity of European Jewry. Bonfil follows the traditional path for exploring culture in focusing on the significant works of creative individuals, in this case rabbi Simone (Sinha) Luzzatto’s Discorso circa it stato de gl’ hebrei et in particolari dimoranti nell’ inclita citta di Venetia (Discourse concerning the condition of the Jews, particularly those living in the city of Venice), published about 1638. The primary focus of this work is on Talmudism but it also touches on family, synagogue, and primary school, and on a gender-based hierarchy of low and high, female/male. Jewish learning in Venice was largely carried out in private contexts, rather than in Yeshivoth. Many Jewish intellectuals were intimately involved in Venice’s vibrant book-publishing industry. Jewish intellectual life in Venice flourished during three centuries of Venetian cultural greatness. In “Medicine and Scientific Thought: The World of Tobias Cohen,” David Ruderman establishes the significance of the University of Padua, a major university near Venice (Venice did not have its own), in being the first to admit Jewish students en masse to the study of medicine, training hundreds of doctors. Padua’s university thus played an important role in shaping the religious and cultural sensibilities of Jews in Venice. Its most distinguished graduate was Tobias Cohen (1654-1728), the subject of this case study, whose Ma’ash Tuvigyah has been widely published and re-published, as late as 1978 in Jerusalem, and 1974 in Brooklyn. It was written in Hebrew as a defense of the scientific attainments of Jews, in keeping with the general development of modern science in early modern Europe.

A second case study on the life of the famous Leon Modena by Don Harran focuses on Jewish musical culture. After the Roman destruction of the Second Temple in 70 C.E., music played a different role for a people mourning the loss of their sanctuary and political independence. Jewish musicians were sought as performers in Venice. Leon Modena published over forty volumes on many subjects, including a volume on Jewish music. He also headed a Jewish music academy in the ghetto. The final essay by Elliott Horowitz explores the structure and function of “Processions, Piety, and Jewish Confraternities.” Jewish confraternities, in existence by 1581, followed the form and practices of Roman Christian organizations of male coreligionists marching in processions with torches on select occasions: at funerals, and at the presentation of torah scrolls to the synagogue. Thus, Jewish religion-based self-help organizations participated in the processional life of Venice as described and analyzed by Edward Muir. Some believe that rituals express something of the religious or even political mentality and sensibilities of a population.

In closing, I would just add that this unusually coherent collection of essays on the theme of Jewish community life in early modern Venice deserves a wide readership of those interested in the history of Jews in Europe generally, or those with an interest in the life of Venice, one of Italy’s most important and interesting cities.