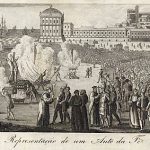 Toward a History of Portuguese Inquisition: Trends in Modern Historiography (1974-2009)

Giuseppe Marcocci
This article is reprinted by permission from: Giuseppe Marcocci, « Toward a History of the Portuguese Inquisition Trends in Modern Historiography (1974-2009) », Revue de l’histoire des religions, 3 | 2010, mis en ligne le 01 octobre 2013. Go to the RHR CPL thanks Prof. Charles Ammiel for making it available to our readers.

One and a half centuries after the publication of the work that inaugurated the classic historiography on the subject – the História da origem e estabelecimento da Inquisição em Portugal (1854-59) by Alexandre Herculano –, a comprehensive history of the Portuguese Inquisition (1536-1821) has yet to be written.

One could speculate at length about the reasons for this historiographical vacuum, which distinguishes the Portuguese Inquisition from both the Spanish as well as the Roman Inquisition, encompassing the controversy that has characterised historical interest in the Portuguese Holy Office, from its remote beginnings in the modern age up to the confessional concerns that are still evident well after the end of Salazar’s dictatorship (1932-74). This is even more inexplicable when one considers the reduced number of tribunals of the Portuguese Inquisition (four in all, including that of Goa in India) as compared to its counterparts in Spain and Italy between the late 15th century and the first half of the 19th century, as well as the fact that a considerable patrimony of sources produced by the Portuguese Holy Office are concentrated in a single State archive – the Torre do Tombo in Lisbon.

It is not enough to cite external factors. While it is true that Juan Antonio Llorente published his Histoire critique de l’Inquisition d’Espagne in Paris during the early 19th century, at the beginning of the following century the American historian Henry Charles Lea was able to overcome limitations and peruse an already rich scientific literature about the Spanish Inquisition to produce an unsurpassed four-volume synthesis of this historiography.1 After the work by Henry Kamen, with the return of intellectual freedom after the end of Franco’s regime (1939-75), growing numbers of foreign historians have worked alongside Spanish colleagues and put forth proposals to reinterpret and reformulate the corpus of existing works, reflecting an apparently inexhaustible need to ponder upon the significance of the actions of the Holy Office in the context of Spain and Catholic Europe.

Notwithstanding the drop in the number of studies from the 1990s onwards, general histories of the Spanish Inquisition have perhaps become more streamlined and their number continues to grow.

Similarly, an overview of the history of the Inquisition in Italy can be found in the latest book by Andrea Del Col, who even encompasses the Middle Ages and more contemporary times.

Thus, the desire expressed by John Tedeschi in his preface to the Italian edition of his collection of essays entitled The Prosecution of Heresy has gradually begun to be transformed into reality. The translation of Tedeschi’s work was published a year after the great fresco by Adriano Prosperi about the role of the Holy Office in the history of the Church in Italy and in the gradual construction of a unified State.5 Other examples, published both before and after the work by Del Col, reveal how, after a long period characterised by a vast mass of research on specific subjects, the historiography in this area has matured as it became increasingly evident that there was a pressing need for a global overview that could help overcome the

difficulties arising from the loss and dispersion of sources, due to the political fragmentation of the Italian peninsula during the Ancien Régime.6 In fact, it is in Italy itself, a country that has hosted several conferences during the past twenty years embracing the idea of comparing the different Inquisitions, that has been realised a four-volume dictionary spanning the universal history of the Holy Office.

The Rare Book and Manuscript Library at Columbia — and consequently New York City at large— have been fortunate to receive a most extraordinary gift: the Alberto Tallone Editore collection: some…