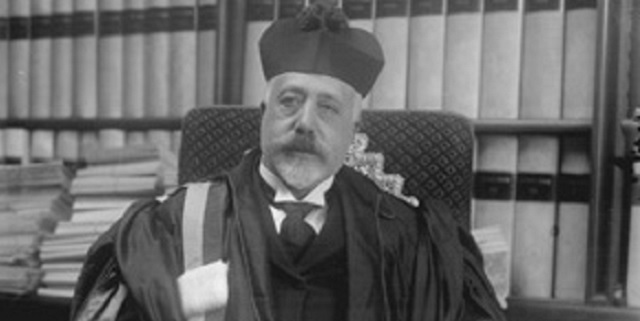 Giovanni Paoloni, Università di Roma La Sapienza
Giovanni Paoloni (Rome, 1956) works on the history and archival heritage of R&D institutions in nineteenth and twentieth century Italy. From 1979 to 1997 State archivist and researcher in history of science at the “Archivio centrale dello Stato”; from 1997 to 2001 researcher at the “Scuola Speciale per Archivisti e Bibliotecari”, Università “La Sapienza”, Roma; from 2001 to 2005 full professor of Archival Theory, and History of Archives, in the Faculty of Studies on Cultural Heritage of the “Università della Tuscia”, Viterbo. Since Nov. 1st, 2005, full professor of Archival Theory in the “Facoltà di Filosofia, Lettere, Scienze Umanistiche e Studi Orientali”, Università “La Sapienza”, Roma; since 2008 he also teaches History of Research Institutions and of Science Policy at the “Scuola di specializzazione in beni archivistici e librari”. Volterra Scholar at the Dibner Institute for the History of Science and Technology (MIT) in July-August 2004, and Senior Fellow at the same institution in the Spring Term 2006 (January-August), since Nov. 2010 he is associated to the “Istituto per la storia del pensiero filosofico e scientifico” (CNR).
Vito Volterra
Vito Volterra 1860-1940. Vito Volterra’s interest in mathematics started at the age of 11 when he began to study Legendre’s Geometry. At the age of 13 he began to study the Three Body Problem and made some progress by partitioning the time into small intervals over which he could consider the force constant. His family were extremely poor (his father had died when Vito was two years old) but after attending lectures at Florence he was able to proceed to Pisa in 1878. At Pisa he studied under Betti, graduating Doctor of Physics in 1882. His thesis on hydrodynamics included some results of Stokes, discovered later but independently by Volterra. He became Professor of Mechanics at Pisa in 1883 and, after Betti’s death, he occupied the Chair of Mathematical Physics. After being appointed to the Chair of Mechanics at Turin he was appointed to the Chair of Mathematical Physics at Rome in 1900. Volterra conceived the idea of a theory of functions which depend on a continuous set of values of another function in 1883. Hadamard was later to introduce the word ‘functional’ which replaced Volterra’s original terminology. In 1890 Volterra showed by means of his functional calculus that the theory of Hamilton and Jacobi for the integration of the differential equations of dynamics could be extended to other problems of mathematical physics. During the years 1892 to 1894 Volterra published papers on partial differential equations, particularly the equation of cylindrical waves. His most famous work was done on integral equations. He began this study in 1884 and in 1896 he published papers on what is now called ‘an integral equation of Volterra type’. He continued to study functional analysis applications to integral equations producing a large number of papers on composition and permutable functions. During the First World War Volterra joined the Air Force. He made many journeys to France and England to promote scientific collaboration. After the War he returned to the University of Rome and his interests moved to mathematical biology. He studied the Verhulst equation and the logistic curve. He also wrote on predator-prey equations. In 1922 Fascism siezed Italy and Volterra fought against it in the Italian Parliament. However by 1930 the Parliament was abolished and when Volterra refused to take an oath of allegience to the Fascist Government in 1931 he was forced to leave the University of Rome. From the following year he lived mostly abroad, mainly in Paris but also Spain and other countries. Volterra was offered an honorary degree by the University of St Andrews in 1938 but his doctor did not allow him to travel to Scotland to receive it.

Vito Volterra is generally considered one of the greatest mathematicians of his time: “His most important contributions were in higher analysis, mathematical physics, celestial mechanics, the mathematical theory of elasticity, and mathematical biometrics. His major works in these fields included the foundation of the theory of functionals and the solution of the type of integral equations with variable limits that now bear his name, methods of integrating hyperbolic partial differential equations, the study of hereditary phenomena, optics of birifrangent media, the motion of the earth’s poles, and, in his last years, placing the laws of biological fluctuations on mathematical bases and establishing principles of a demographic dynamics that present analogies to the dynamics of material systems” (Dictionary of Scientific Biography).

Volterra was born in Ancona in 1860. He began his academic career in 1883, becoming a full professor of mechanics in the University of Pisa at the early age of 23. In 1893 he moved to the University of Turin; in 1894 he was elected a member of the Società Italiana delle Scienze, detta dei XL; in 1895 he became a member of the Accademia delle Scienze di Torino; and in 1899 he was elected to the most influential Italian scientific academy, the Accademia Nazionale dei Lincei.

In 1900 Volterra moved again, to teach mathematical physics in Rome, where for 12 years (1907–1919) he was dean of the Faculty of Mathematical, Physical, and Natural Sciences. In 1901 he inaugurated the new academic year with the lecture “Sui tentativi di applicazione delle matematiche alle scienze biologiche e sociali,” which demonstrated the importance of mathematical applications to the biological sciences and to socioeconomic research. Starting in 1900, his growing interest (both scientific and practical) in the relationship between scientific research and socioeconomic development drew him to the new technocratic milieu emerging in Rome under the political leadership of Giovanni Giolitti and Francesco Saverio Nitti, during the period usually described as the years of “industrial takeoff.”

In 1905 he became a Senator, affirming his new role as a policymaker in the field of scientific research. He helped found the Società Italiana per il Progresso delle Scienze (Association for the Advancement of Science) in 1906; it was soon to become the most influential organization of the Italian scientific community in the first three decades of the 20th century. In 1912 he became president of the newly established Comitato Talassografico Italiano, a national and international endeavor for marine research in the Mediterranean. He was also involved in the establishment of the national network for meteorology, and in the early stages of the development of Italian aeronautics.

In 1914 and 1915, Volterra was very active in the Italian political debate on World War I. He was against the neutrality proclaimed at the outbreak of the war, and in favor of an alliance with the French–British Entente Cordiale, against the Central Powers. When Italy ended its neutrality on May 24, 1915, he entered the army as a volunteer in the Air Force, and immediately became involved in the scientific and technical cooperation between the Allies. In 1917 he was appointed director of the Ufficio Invenzioni e Ricerche, from which the Italian National Research Council was to develop after the war, and in 1918 and 1919 he worked with the American astronomer George E. Hale, the Britisher Arthur Schuster, and the Belgian Georges Lecointe in founding the International Research Council (later the International Council of Scientific Unions). In 1920 he was elected president of the Società Italiana delle Scienze detta dei XL; in 1921, president of the Bureau International des Poids et Mesures; and in 1923, president of the Accademia Nazionale dei Lincei.

Though he never published on the subject, Volterra was very interested in the history of science. In 1903, when the International Congress of Historical Sciences was held in Rome, he chaired the organizing committee of the section on history of science, and he always tried (unsuccessfully) to gain institutional and academic support for that discipline. He was involved in all the major institutional publishing of works by the great Italian scientists of the past, from Leonardo to Galileo, Torricelli, and Volta.

Himself a bibliophile, during his life Volterra built a collection of ancient science books that is now considered among the most important in the world. He frequently traveled to Paris because of his academic and institutional role, and there he spent many hours with antiquarian booksellers, mainly bouquinistes along the Seine: it was there that he purchased most of his books. The collection is presently a part of the Burndy Library, now in San Marino, California (the Dibner Institute has closed). It consists of three different groups of books: Volterra’s own professional library; his collection of ancient books; and the collection of published articles sent to him by colleagues from all over the world; in all, there are over 8,000 books and 17,000 articles.

Volterra had never liked Mussolini’s government. In a letter of 1922 to a French friend, he expressed his “concern” for the political situation in Italy. But like many other members of the liberal establishment, he did not question, at first, the legitimacy of a government appointed by the king. He simply continued the activities connected with his position, and cooperated, when necessary, with governmental bodies. This began to change in 1924, when the Matteotti Affair—the assassination by Fascists of the respected Socialist leader, Giacomo Matteotti— demonstrated the true nature of Fascism and precipitated the gradual transformation of the Mussolini government into a totalitarian dictatorship.

Under these circumstances, Volterra, who in 1923 had openly opposed the educational reform promoted by Giovanni Gentile, joined the Unione delle forze liberali e democratiche, led by Giovanni Amendola, in October 1924. The following year, Volterra signed the “Manifesto degli intellettuali antifascisti” proposed by Benedetto Croce, and soon afterward he joined the group of anti-Fascist Senators. This was the only legal group of opponents that Mussolini was obliged to tolerate: he could not dissolve the Senate (whose members were appointed for life by the king), as he had done with the other branch of the Parliament.

In 1931, university professors were ordered to take an oath of fidelity to the Fascist government. Volterra was one of only 12 university professors who refused the oath; as a result, he lost his academic position and was forced to retire. In 1934 a similar oath was imposed on the members of academies and scientific institutions: at this time, Volterra ceased to be a member of the Lincei. Four years later, in 1938, as a Jew he was a victim, with his family, of the racial laws, although as a Senator he was partially protected against the worst aspects of anti-Semitic legislation. Volterra reacted with exceptional vitality to this situation: he continued his scientific activities and maintained his extraordinary network of contacts, both in Italy and abroad. He died at the age of 80 in 1940, a few months after Italy entered World War II.

Some Observations on Catholicism, Fascism and Totalitarianism During the Papacy of Pius XI. On David L. Kertzer’s The Pope and Mussolini: The Secret History of Pius XI and the Rise…