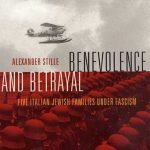 Alexander Stille
Alexander Stille is professor of international journalism at the Columbia School of Journalism and the author of Excellent Cadavers: The Mafia and the Death of the First Italian Republic. He graduated from Yale University is a frequent contributor to The New Yorker , The New York Times, and the Boston Globe.

Winner of the Los Angeles Times Book Award this book is a profoundly moving history of Italy’s Jews under the shadow of the Holocaust, told through the lives of five Jewish Italian families: the Ovazzas of Turin, who prospered under Mussolini and whose patriarch became a prominent fascist; the Foas of Turin, whose children included both an antifascist activist and a Fascist Party member; the Di Verolis of Rome, who struggled for survival in the ghetto; the Teglios of Genoa, one of whom worked with the Catholic church to save hundreds of Jews; and the Schonheits of Ferrara, who were sent to Buchenwald and Ravensbruck. An extraordinary montage that resurrects a forgotten and tragic era.

Books of The Times; 5 Jewish Families in Fascist Italy, on Both Sides
By Herbert Mitgang, The New York Times

Italian Fascism, censorship, the German occupation of wartime Italy, anti-Semitism, deportations to the Third Reich’s concentration camps, the Holocaust: all of these served as background for a number of remarkable Italian authors who survived experiences in the underground, in the camps or in exile to produce a lasting literature.

Of course, the writers would have gladly skipped these chapters in their lives and the dislocations and deaths of family and friends. Undoubtedly, some would have achieved artistry even without the intercession of Mussolini and Hitler. “I’m not a guest of my time,” Giorgio Bassani once explained to this reviewer. “I’m a guest of myself.” Still, personal horror and adversity contributed to Ignazio Silone’s “Bread and Wine,” Elio Vittorini’s “Conversation in Sicily,” Natalia Ginzburg’s “Family Sayings,” Carlo Levi’s “Christ Stopped at Eboli,” Primo Levi’s “If This Be a Man” and Mr. Bassani’s own “Garden of the Finzi-Continis.”

The reader who treasures these masterly novels and neo-realistic reminiscences will appreciate Alexander Stille’s factual “Benevolence and Betrayal,” a highly readable and powerful new book of historical interpretation. Mr. Stille, an American living in Italy who writes for The Boston Globe and other publications, hit upon the fine idea of telling what happened to five Jewish families during the Fascist era. The result is an enlarged portrait of a people who have lived in Italy at least since the time of Caesar, sometimes in bondage, sometimes in freedom.

Indirectly, the book delivers a lesson for anyone, of any religious background, who tries to make an accommodation with a flag-waving government: Dictators, benevolent or otherwise, cannot be trusted.

Mr. Stille’s book is full of surprises and paradoxes. Jews played a prominent role in the unification of Italy in the middle of the 19th century. The ancestors of one of the five Jewish families featured in the book helped to raise money for Giuseppe Garibaldi’s expedition to invade Sicily and unite Italy; seven of the legendary Thousand who set sail with Garibaldi were Jews. Later, while France was bitterly divided over the fate of Capt. Alfred Dreyfus, Italian Jews became generals, cabinet ministers and prime ministers. No fewer than 50 Jewish generals served in Italy’s Army during World War I. By 1920, the King had appointed 19 Jews to be senators.

“What distinguished the story of Italian Jews from that of Jews elsewhere in Europe was the long coexistence between Jews and Fascists in Mussolini’s Italy,” Mr. Stille writes. “Italian Fascism was in power for 16 years before it turned anti-Semitic in 1938. Until then, Jews were as likely to be members of the Fascist Party as were other conservative-minded Italians. This singular fact altered the entire moral and existential equation for Italy’s Jews. In other countries, Fascism was the undisguised enemy. But the experience of Italian Jews was far more complex: a strange mixture of benevolence and betrayal, persecution and rescue.”

The first part of the book tells the story of the Ovazzas of Turin, a loyal Fascist family. Their lives follow the rise and assimilation of northern Italian Jews, who prospered and were devoted to their city and country. Ettore Ovazza remained close to the Fascist state even after Hitler forced Mussolini to introduce racial laws in 1938. Believing that his privileged position would be restored after the war, Ovazza stayed on after the Germans marched in. He was arrested and killed by SS troops.

The second story is a counterpoint to the first, telling about the anti-Fascist Foa family in Turin. One brother was in the underground; another was a member of the Fascist Party while at the same time holding anti-Fascist sympathies. Vittorio Foa was betrayed by an Italian informer and imprisoned for eight years.

The third story, about the Di Veroli family, describes a radically different life in the Rome ghetto. Hundreds of Jews went into hiding; hundreds of others were deported. Those who remained in and around Rome were particularly vulnerable after the Germans, looking for partisans, were locked in battle with the British and American forces in southern Italy. Members of this family participated in all the important actions to thwart the enemy during the nine-month Nazi occupation.

The fourth story, set in Genoa, emphasizes the cooperation between Jews and the local Roman Catholic church in hiding and saving Jews. The family of Rabbi Riccardo Pacifici illustrates the mutual religious respect between Jews and Catholic priests. Massimo Teglio, a member of another Genoa family, led a clandestine Jewish assistance group despite the dangers of capture by the Germans.

The final story recounts the experiences of the Schonheit family from Ferrara, the scene of Mr. Bassani’s fictional Finzi-Continis. They were arrested not by Germans but by Italian Fascists, who played a strong role in the Italian phase of the Holocaust. The Schonheits, who were half-Jewish and wore badges identifying them as Italians, received less harsh treatment at the hands of the Germans. The family survived Buchenwald and Ravensbruck.

“While I was researching the book,” Mr. Stille reveals, “several Italian Jews tried to dissuade me from writing about the phenomenon of Jewish Fascism, out of a fear of stirring renewed anti-Semitism.” Fortunately, he disagreed, deciding that their behavior during the Fascist era ran the full gamut from the foolish and contemptible to the wise and heroic. The result is “Benevolence and Betrayal,” an achievement that deserves to stand next to the most insightful fiction about life and death under Fascism.

Lagersprache: Primo Levi and the Language of Survival

In a story from 1976 entitled “Decoding” (Decodificazione), Primo Levi investigates the appearance of swastikas and Fascist graffiti in a small Italian town.[1] Discovering they were made by a disaffected teenager,…