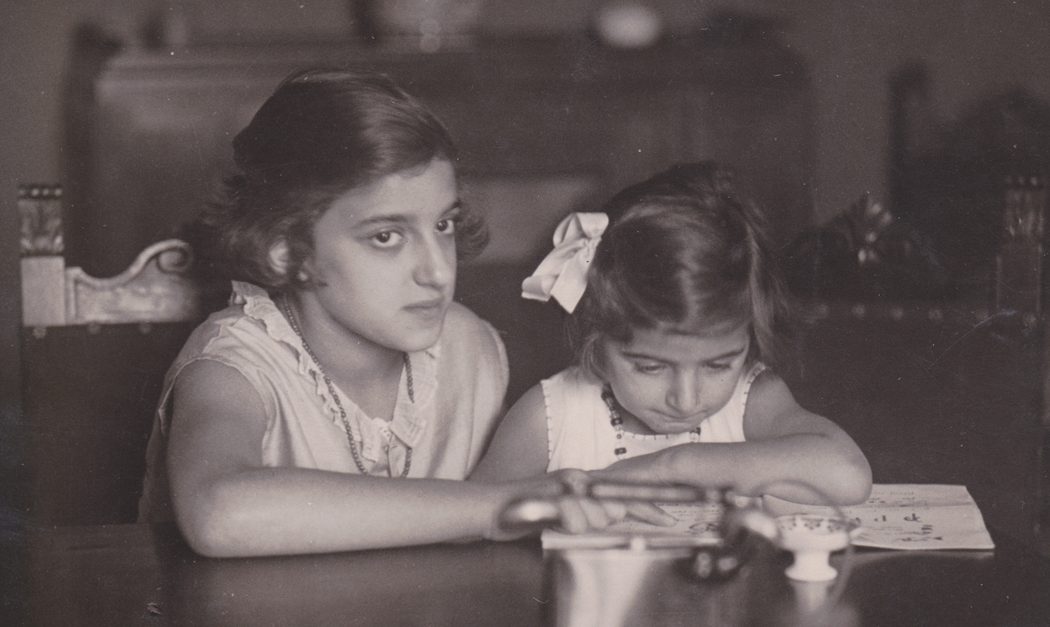 A conversation with Olga Ragusa – A lifelong engagement with the printed word: reading, writing and teaching.

The elder of Andrea Ragusa’s daughters, Olga, arrived in New York with her family in 1931 and pursued an academic career, reaching the position of Professor Emeritus at Columbia University. A charismatic and beloved teacher, she was Chair of the Italian Department from 1963 to 1992. From 1968 to 1984 she was the editor-in-chief of the journal Italica. Among her many scholarly publications is her study of her father’s life in publishing, Andrea Ragusa Editore-libraio italiano a New York dal 1931 al 1974.*

Alessandro Cassin: Do you recall what books were most important to you as a child?
Olga Ragusa: Yes, Cinderella above all.

AC: Were you read to, and in what language?

OR: My mother read to me in both Italian and in German.

AC: I saw a loving letter that your father wrote to you in 1931, while he was in the States and you and your mother and sister in Merano. Besides expressing fatherly affection he encouraged you in your studies, languages in particular. Clearly your father valued education and literature, could you tell us something of the role that education and literature played in your life?

OR: Literature and education were very important for my father. He was a perfectionist in all his endeavors. He never tired, not even when his health was at risk.

As far as my career plans, as a girl I had wish to become a soprano and sing at the Opera. When we got to New York I remember being taken to hear Beniamino Gigli.

Music was an essential part of our family life, Italian and German music.
I began my primary education in Milano, in 1929-30 at the Scuola Elementare Laura Visconti Ciceri, in Via Palermo.

In the report card from that first year one of the subjects was canto, singing… After my early education in Italy, I followed the path of all American students.

AC: How do you think your personal background affected your education and cultural outlook?

OR: The daughter of a German mother and an Italian father, I never forgot my origins and always strived for continuity, in the midst of humanity’s forward and backward thrusts, despite the world’s historical development which instead pushed toward discontinuity through wars and persecutions.

AC: In the first part of the 20th Century, the Casa Italiana, under Prezzolini’s direction, played a central cultural role as a bridge between Italian culture and American academia. Can you describe those achievements and what you think its role may be in the future?

OR: During Prezzolini’s lifetime (1882-1982) there were countless events in Italy and abroad that changed alliances and balances of power, both politically and culturally. This was in part reflected in the activities at the Casa Italiana.

The Casa Italiana was built thanks to contributions of Italian immigrants who grew rich and made a mark in various fields, particularly in construction. In fact the Casa Italiana was donated to Columbia University in much the same way as the Maison Française and the Deutsche Haus, nearby Casa Italiana, at the corner of West 117th Street.

Under Prezzolini Casa Italiana established itself as a cultural and educational center for those interested in Italy and its culture. In my view, in Prezzolini times, the international situation was less dangerous than today and communication between Europe and America easier. Technological progress today complicates relations between all parts of the world, despite what one may think.

I do not have the talent to predict the future, and cannot speak of the future of Casa Italiana. I can only say that after Prezzolini’s death, many of his documents and letters were collected by Peter M. Riccio, my neighbor and Professor Emeritus at Columbia. Riccio was born in the US from Italian parents and eventually became Head of Casa Italiana himself. Riccio and I often went for breakfast at a neighborhood drugstore, a few steps from the Casa Italiana. At the time of my retirement (1992), I decided to take with me all the documents I had collected, in order to write down my own account of my activities at Casa Italiana.

AC: Prezzolini – from an academic position and your father, from a cultural-entrepreneurial one – established strong ties between New York and Italy, despite the Depression and later the War. How would you characterize the long association between the two?

OR: My father and Prezzolini were collaborators and friends. Their knowledge and professional achievements derived from their personal cultural background. Their cultural horizon had no barriers of class or religion. In their intellectual activities each of them followed his own path. All of is documented in Giuseppe Prezzolini: The American Years 1929-1962**.

When my father came to America, Giovanni Gentile (the Minister of education) on behalf of the newly founded Enciclopedia Italiana Treccani, gave him a letter of recommendation and his business card, as an introduction to Prezzolini. From the first meeting Prezzolini and my father found themselves speaking the same language and following the same line of thought. Not simply because they were Italian, but because they had the same cultural background. Their point of contact was literature. Prezzolini was self-taught, my father had gone far beyond Sicily where he was born, to become an American of Italian language. The contrast between the two is described in Giuseppe Prezzolini: The American Years 1929-1962 and my book Gli Anni Americani di Giuseppe Prezzolini.

AC: After your father’s passing, you and your sister took over the bookstore. Can you describe those years and your involvement with your father’s business throughout your adult life?

OR: Literature and book culture has been part of our upbringing. In fact our father’s activities were intertwined with our family life. My mother, my sister and I had been exposed to my father’s work from as far as I can remember. We travelled with him to Milan or Rome where he had business meetings with publishers and printers.
After his passing, we continued in his footsteps, for as long as we could.

AC: Both your father’s family and that of Sante Fortunato Vanni, were originally from Caltagirone, Sicily. Do you know if the Ragusas and the Vannis knew each other in Italy?

OR: As far as I know they did not.

AC: Your father embodied the long Italian tradition of the Bookseller-Publisher. Do you think running a bookstore and the publishing business suited his ambition and personality or was it in part the outcome of circumstances?

My father was born in Caltagirone, Sicily on October 2, 1896. According to the identification card issued to him by the Italian Army, Lieutenant Andrea Ragusa was an accountant by profession. After the First World War my father returned to the civilian life in Milan, where he worked for the publisher Treves and Tumminelli (see my book Andrea Ragusa Publisher and bookseller in New York from 1931 to 1974.)Yes, running a bookstore and the publishing “ business” suited his ambition and personality, as explained in my book. In other words, my father was an independent man who had the courage and skill to survive the Great Depression, selling and producing books. He used an old language in a new country. This is the story of my father.

Acknowledgments: We would like to thank Gary Gosen of Gosen Rare Books for his invaluable assistance and Cosimo Ceccuti and the Spadolini Foundation for making available archival material from the A. Ragusa Collection.

Bound in Venice. The First Talmud

Bound in Venice: The Serene Republic and the Dawn of the Book, Europa Editions 2013 A history of the dawn of the book coming at a time when both books…