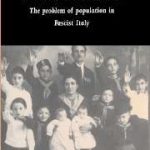 Carl Ipsen
Carl Ipsen (Indiana University) is a historian of social sciences and demography. His early research focuses on population policy in Fascist Italy and resulted in the book “Dictating Demography: The Problem of Population in Fascist Italy. His second book: Italy in the Age of Pinocchio. Children and Danger in the Liberal Era (Palgrave, 2006) dealt with children’s issues in 20th century Italy (abandonment, labor, delinquency, emigration). Professor Ipsen also works on emigration in the same period. He is a member of The Nineteenth Century Forum at Indiana University. He has worked as consultant on the issues of contemporary child immigration and integration in Italy (an EU project) and on smoking in post-World War II Italy. He has been a fellow at the American Academy in Rome.
Mussolini believed that numbers were the key to strength. Between 1922 and 1945 the Fascists attempted to translate that belief into policy by introducing a structured programme to increase the population in Italy.

This included campaigns to increase the birth rate, the establishment of demographic colonies, and a battle against urbanisation. This book is a detailed examination of the demographic policy of Mussolini’s Fascist regime.

Based on archival research, it shows how the Fascists used statistics to mould public opinion, as well as to form policy, and demonstrates the ways in which population theory at the time both reflected and informed policy. Carl Ipsen argues that Mussolini’s demographic policy can tell us a great deal about the contradictory nature of Fascism itself, and describes the Fascist efforts to mould the Italian population as one of the most telling examples of the failed attempt to create a totalitarian Fascist utopia.

The Church and the Righteous

The Church and the Righteous. Susan Zuccotti in conversation with Alessandro Cassin Cardinal Elia Dalla Costa, archbishop of Florence during World War II, has recently been…