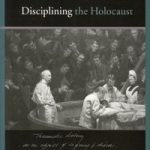 Karyn Ball
Karyn Ball is an associate professor specializing in critical theory and literary theory in the Department of English and Film Studies at the University of Alberta in Edmonton. She has edited special issues of Cultural Critique and Parallax. Her book, Disciplining the Holocaust, is forthcoming from the State University of New York Press.
Disciplining the Holocaust is a brave, multileveled, and important intervention that presages a new type of historical meditation, one in which new ways of framing the unrepresentable are on display. The book is informed by an impressive combination of critical vocabularies, all of which seem needed to address one of the bewitched sites of modernity.” — Tom Cohen

Karyn Ball elevates the discussion of the Holocaust to a new level of critical reflection. Her mind is as sharp as her eye is quick. She shows that the current talk about the epistemology and ontology of the Holocaust is less about what it was, what happened, and how do we grasp its content or substance than what constitutes the “proper” attitudes and feelings that different groups are expected to bring to their contemplation of the new kind of victimage which the Holocaust made manifest. A deep and brilliant book. Hayden White