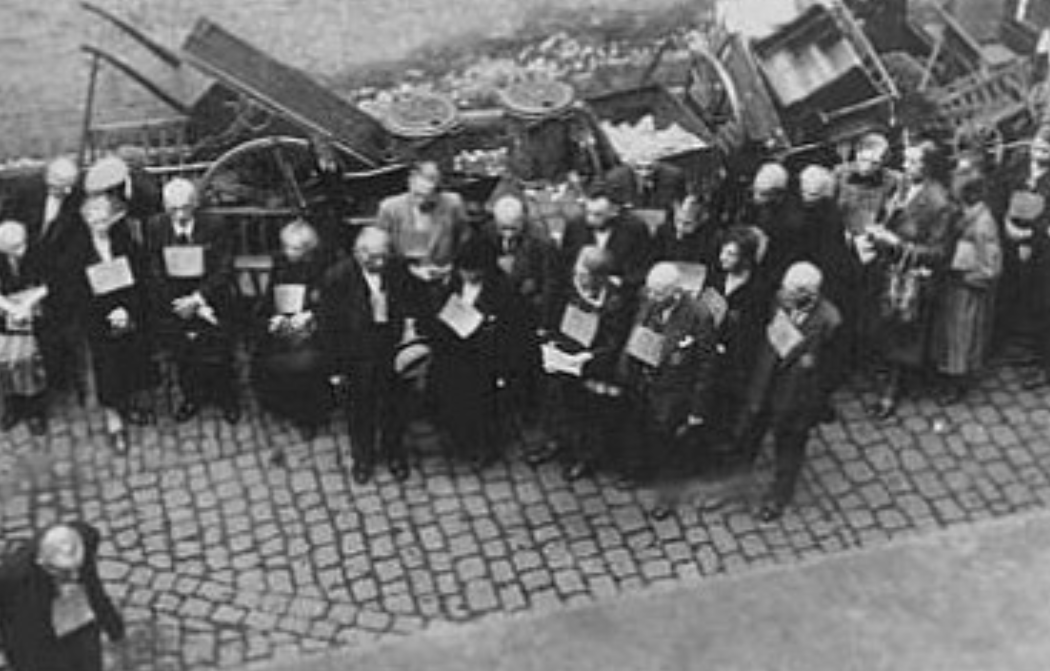 James Loeffler, Tablet 2013
James Loeffler is the author of The Most Musical Nation: Jews and Culture in the Late Russian Empire, newly available in paperback. This article was published in Tablet

In the never-ending search for ways to remember the Holocaust, the newest media contrivance to appear is “Holocaust Music.” National Public Radio recently profiled an Italian conductor who has embarked on a quixotic campaign to record every note of music composed inside a Nazi concentration camp. Two months ago, New York’s Lincoln Center played host to the Defiant Requiem, a traveling revue that presents a dramatic reenactment of a performance of Verdi’s Requiem that took place in the Terezin concentration camp during World War II. The concert tour has crisscrossed the globe, with headquarters in a summer institute in the Czech Republic. A related documentary film has aired on PBS. On the face of it, these artistic efforts certainly sound legitimate. Aren’t they merely the musical analogue to the literature depicting the horrors of the Holocaust?

They are not. In fact, I’d argue that these efforts represent a tragically misconceived approach that distorts the memory of the Holocaust and slights the very musicians that they purport to honor.

The late Jewish philosopher Emil Fackenheim spoke of the 614th commandment: not to grant Hitler posthumous victories. Yet one of Hitler’s lasting achievements was to leave behind an anti-Semitic myth, acquired from Richard Wagner, that Jews possess no music of their own. Not only did the Holocaust send many composers into exile and worse, it also killed a decades-long effort to build a Jewish school in modern classical music.

Now, by labeling certain works of art as “Holocaust music,” we risk creating a genre that turns the details of history and the complex meanings of music into one saccharine lesson in universalist tolerance. It may sound like heresy to criticize a pious act of Holocaust remembrance. But the true heresy is to turn Jewish composers into shadow images defined only by their status as Hitler’s victims.

There is something undeniably compelling about the recovery of lost and forgotten music. Silenced Jewish voices, particularly from the august realm of classical music, stir our imagination as an immediate link to the aural texture of the past. And the stories of the thousands of Jewish musicians banned, exiled, and murdered by the Nazis and their collaborators share a special poignancy given the centrality of Jews to modern European musical life. Which is why, for decades, scholars and musicians have worked assiduously to recover the lives and music of the Nazi victims. Organizations such as the Orel Foundation, ORT, and the U.S. Holocaust Memorial Museum consistently deliver both music and history with equal accuracy. But these efforts now risk being overshadowed by the new age of multimedia Holocaust music experience.

In theory, the KZ-Musik project of Francesco Lotoro is a noble endeavor. A Catholic Italian who converted to Judaism in 2004, Lotoro has spent years collecting musical manuscripts and recording them. To date, 24 CDs have been issued. The works all come from composers who suffered imprisonment or worse at the hands of the Nazis. Their music was in many cases neglected or partially destroyed.

Yet Lotoro’s construction of a hierarchy of suffering—only incarcerated composers are included in the series, and only music written inside camps—falsifies the very history it purports to recover. This artificial delimitation ignores the full sweep of the Nazi campaign to make Western music judenrein. Where is Paul Ben-Haim in this story? The German Jewish composer left Munich for Tel Aviv in 1933, where he became a founding father of Israeli art music. What of Walter Braunfels? The half-Jewish German composer spent the war in internal exile in Germany and saw his music—the last great burst of German Romanticism—suppressed as “degenerate.” Where is the composer Mieczysław Weinberg? The Polish-born Jewish composer fled the Nazis twice—from independent Poland into the Soviet Byelorussia, then again into the Russian interior—and his wartime works are among the most searing contemporaneous responses to the Nazi genocide. Yet none of these composers finds a place in the Italian recording series, since they don’t fit this particular definition of what a Nazi musical victim should be.

A collector’s item achieves value by virtue of its provenance: In the case of Holocaust music, a concentration camp tattoo or its equivalent has become a sick kind of stamp of approval for art—one that demands that listeners surrender artistic judgment to the straightjacket of prefab morality and political meaning. It is a seductive fiction that suffering ennobles art. In Lotoro’s project, for example, musical gems are interspersed with throwaway sketches that fail to do justice to the composers’ varied talents.

If the KZ-Musik series is misguided in its literal-mindedness, the Defiant Requiem concert-drama is perverse in its artistic excesses. The project has its origins in a real story of Jewish prisoners at the Terezin concentration camp near Prague who performed Verdi’s Requiem 16 times over the course of 1943 and 1944. The Nazis permitted the Jews to stage music and theater for propaganda purposes and to distract them from their impending deportation to the death camps. This is a dramatic, even moving historical episode that deserves to be remembered, analyzed, and discussed. What it doesn’t deserve is to be recreated as a virtual multimedia extravaganza.

The Defiant Requiem is replete with factual errors and historical distortions in the name of a theme of spiritual resistance. In some versions, actors reportedly wore striped pajamas—though their real-life models in Terezin did not. An entire orchestra is deployed to back up the chorus and soloists, though the inmates had only a piano at their disposal. Film images, narration, train whistles, and various other stage tricks turn a story of victimhood and desperation into a one-dimensional parable of art’s redemptive powers while the anodyne American Jewish summer camp hymn “Oseh shalom bimromav” is interpolated as a salvic prayer for world peace.

The Defiant Requiem focuses on a thin sliver of silver lining to a story that was fundamentally tragic: The musicians of Terezin may have been defiant, but they were also decimated. The Verdi Terezin episode was a one-time event—restaging it over and over again ironically turns Latin liturgy into the prime Jewish musical statement of the Holocaust. Indeed, some Terezin inmates strongly criticized the original performances because they considered a Jewish staging of a Christian funeral mass in front of Nazi captors to be a moral and religious capitulation. That some participants drew a measure of comfort from the music must be balanced against the images of Adolf Eichmann and other Nazi dignitaries clapping happily at the end of the performances. These complex issues are left behind in the wake of a cultural juggernaut that, with backing from the German EVZ Foundation, now aspires to become part of the field of American human-rights education. An online curriculum tailored for American middle schools and high schools links the story of Terezin to more recent hot-button issues, including South Africa, the former Yugoslavia, the American government’s rejection of the International Criminal Court, and U.N. peacekeeping efforts.

By celebrating Jewish musicians for their performance of a Catholic mass (written in homage to an Italian nationalist leader), the Defiant Requiem propagates the persistent anti-Semitic trope, albeit unintentionally, that Jews can only express themselves artistically by borrowing and corrupting European Christian music. By fetishizing a musical repertoire because of its origins in physical spaces of persecution, and highlighting captivity as the primary characteristic of European Jewish composers, the KZ-Musik project sends a similarly misleading message.

Built into the very idea of “Holocaust music” is an element of emotional manipulation. Artists and audiences who engage in this endeavor may think they are honoring the past and grappling with hard truths. But in reality they are indulging in a form of psychological play-acting. They imagine the music to contain a pre-set, generic Holocaust message that can be activated through performance and listening. But no art, even that which is produced in the most extreme conditions, can be reduced to a one-dimensional message, however important. Doing so risks suffocating music by over-inoculating it against the very freedom of interpretation that is the lifeblood of all art.

While forgotten composers deserve to be remembered, recovering lost music requires close attention to the actual lives and artistic visions of its composers. Strip-mining the Jewish musical past, even when done with the best of intentions, doesn’t serve the goals of remembrance or history. And it doesn’t, at least in these two recent instances, make for good music.