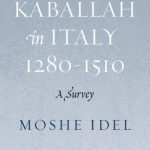 Moshe Idel
Moshe Idel is Max Cooper Professor in the Department of Jewish Thought, Hebrew University, Jerusalem, and senior researcher at the Shalom Hartman Institute. He has received many awards, including the National Jewish Book Award, for his previous books on Kabbalah. He lives in Jerusalem.

This sweeping survey of the history of Kabbalah in Italy represents a major contribution from one of the world’s foremost Kabbalah scholars. The first to focus attention on a specific center of Kabbalah, Moshe Idel charts the ways that Kabbalistic thought and literature developed in Italy and how its unique geographical situation facilitated the arrival of both Spanish and Byzantine Kabbalah.
Idel analyzes the work of three major Kabbalists—Abraham Abulafia, Menahem Recanati, and Yohanan Alemanno—who represent diverse schools of thought: the ecstatic, the theosophical-theurgical, and the astromagical. Directing special attention to the interactions and tensions among these forms of Jewish Kabbalah and the nascent Christian Kabbalah, Idel brings to light the rich history of Kabbalah in Italy and the powerful influence of this important center on the emergence of Christian Kabbalah and European occultism in general.

“A thoughtful and mature reflection on a major subject of Jewish intellectual and cultural history. Like Idel’s other books, [Kabbalah in Italy] is a monument of impressive scholarship and original insight.” —David B. Ruderman, Joseph Meyerhoff Professor of Modern Jewish History, University of Pennsylvania

“This is a grand and sweeping work. It updates and revises a number of Idel’s earlier studies and makes available material that had heretofore only been published in Hebrew. As an area study, it has a coherence that will make it particularly useful for students of more limited background….I can’t think of an English title that equals this in breadth of subject matter…Because this book goes beyond the realm of Jewish studies into Renaissance and Italian history and philosophy, it has that much more relevance.” —Pinchas Giller, Professor of Jewish Thought, American Jewish University, Los Angeles

“In this volume by Idel, the leading contemporary scholar of Jewish mysticism, the main contours and personalities of this Italian tradition are very helpfully described for nonspecialist readers. This is a major contribution to the study of both the history of Jewish mysticism and mysticism more generally. All libraries serving religion and Judaica programs should purchase it.”—S.T. Katz, Choice