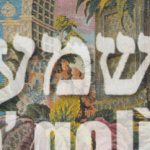 Francesco Spagnolo, University of California, Berkeley
Francesco Spagnolo, Ph.D., is the Curator of The Magnes Collection of Jewish Art and Life at the University of California, Berkeley. In 1997, he founded the Jewish music archives in Milan, and between 1998 and 2002 was responsible for the preservation and publication of Italian Jewish sound recordings at the Ethnomusicology Archives of the National Music Academy in Rome and the National Sound Archives in Jerusalem.

For centuries Livorno has been both a meeting point and global springboard for the cultures of the Jewish  Mediterranean. The musical traditions of the Jews of Livorno, as represented in Daniel Bedarida’s collection offer one of the most significant and authentic records of the extraordinary crosspollination of cultures ancient and modern, popular and esoteric, Jewish and non-Jewish, Mediterranean and Italian, European and non-European that has been consistently gathered, stored, revised and circulated  in this unique community since the seventeenth century.

Although restricted  by religious norms to a narrowly defined area of​​social interaction – the synagogue and the home  – the liturgical music of the Jews in Italy never formed a musical world closed in on itself.

On the contrary, oral traditions, passed down from generation to generation, were unusually open to change, and were constantly exposed to influences from the surrounding musical worlds, including songs from all the Jewish communities of the Mediterranean as well as music composed specifically for the synagogue (in other words, not handed down by oral tradition), the non-liturgical music of the region – especially that of the Catholic Church, and a variety of musical forms both high and lowbrow, including opera.

It is important to keep in mind that Jewish music is not a solely musical or religious category; and Jewish religious music – because of its role in the synagogue and ritual celebrations of the “life cycle” (birth, marriage, death) – both reflects and touches on a wide range of subjects – not strictly musical – of the vita ebraica, and is closely bound up with the dynamics of social, family, economic, and cultural matters in the broadest sense, that characterizes each community.

So the songs of the Livorno Synagogue are much more than a collection of charming melodies of Aramaic and Hebrew texts sung during the liturgy of this Jewish community; they are the true lifeblood – ever flowing and in continuous transformation – of a cultural network that has long crossed national boundaries, religious barriers, and ethnic differences. Like the sea on which it traveled, this music is a fluid mass of ideas, experiences and multi-form cultural exchanges, which are worthy of attention way beyond the worlds of music, or Judaism.

And the Jewish songs of Livorno are important on many levels. On the one hand, they are the direct consequence of Jewish life in Livorno – a city ‘without ghetto’, where Jews were invited to take up residence after their expulsion from the Iberian Peninsula and where they settled in large numbers from the end of the sixteenth century – and should therefore be regarded as a musical record in their local context.

On the other hand, the Jewish music of Livorno is an almost unique example of ‘global culture’ – that is to say, culture circulated through the same channels of exchange used by people, goods and ideas.

Imagine for a moment the vast geographic scope of this Livornese Jewish music network. The Spanish and Portuguese roots of The Iberian – or Sephardic – community in Livorno, with their roots in Spain and Portugal, represent one of the most important traditions of the Jewish world (Jewish immigration to the Iberian Peninsula is one of the earliest, coming as it did directly from Palestine more than two thousand years ago). This community is distinguished by a rich and unique cultural heritage shaped by the experience of coexistence – though not always peaceful, as some fathom today – among the ‘Three Cultures’ – Judaism, Christianity and Islam; and the dramatic experience of forced conversions, the Inquisition and the exile.

With the expulsion of the Jews from Portugal, following that of Spain in 1492, Jews and conversos poured into a sprawling network of communities scattered across Europe and the Mediterranean, including – in addition to Livorno –  Venice and Ancona in Italy, Bordeaux and Bayonne in France, and later Amsterdam, Hamburg and London.

But perhaps more significantly they also migrated to key commercial centers in the eastern Mediterranean, including Alexandria, Salonika and Smyrna. In time, this network of communities – united by both commercial and personal ties, as well as a unique formulation of the Hebrew text of the liturgy – expanded to the New World, starting communities in Central and South America, and later in the United States in Philadelphia and New York, where the Spanish and Portuguese synagogue is the oldest in the entire city.

From the seventeenth century on Jews in Livorno found themselves in a uniquely magnetic zone: Livorno’s geographical centrality was a natural bridge between East and West (as well as between Europe and Africa), and its proximity to the heart of Christianity and, simultaneously, to Italian musical culture, made it a particularly fertile and alluring area for the development of a unique musical tradition. The perception of this, of course, is hardly new; indeed since the nineteenth century, Livorno has been a kind of ‘music production central’ for the entire Sephardic Spanish-Portuguese network.

In the late nineteenth century, Livorno itself became a musical case-study through the research of a musician Federico Consolo (1841-1906) who transcribed the melodies sung by the hazan (cantor) of Livorno, Moses Ventura, and documented them in his book Sefer Shire Yisrael: Ubro lsraele.Antichi Songs of the Ritual Chants of the Spanish Jews (1892).   In a clearly romantic vein, Consolo, a contemporary of Ventura, interpreted his melodies as examples of ancient music passed down since time immemorial. In fact the cultural significance of Jewish music from Livorno was something entirely new – a singular fusion of ancient and modern tradition and innovation uniquely capable of  transcending the boundaries – all European –  between ‘orthodoxy’ and ‘reform’; seamlessly blending songs of the Sephardic tradition with choral works from an eighteenth-century Portuguese Synagogues in Amsterdam, and melodies created by early nineteenth century local composers, in particular Michele  Bolaffi (1768-1842).

Livornese hazanim were employed in Italian synagogues in Venice, Turin, Genoa and Milan; in North Africa  – especially Alexandria; in the Middle East  – in Rhodes and Thessaloniki, in particular; and in France – notably in Nice, where they infused the local Reformed synagogue with unprecedented musical vitality .

Perhaps Livorno’s most celebrated case of a cantor’s success was Sabato Morais (1823-1897), who worked as teacher and cantor at the synagogue Sha’ar ha-Shamayim Sephardic (Bevis Marks) in London, before being invited in 1851 to the Spanish Portuguese synagogue in Philadelphia, Mikveh Yisrael where he became Rabbi and an important spiritual and political leader.

In 1886 he left Mikveh Yisrael, to found the Jewish Theological Seminary in New York, the first Jewish institution of higher education in the Americas and today the main center of conservative Judaism.

Consequently, some songs of Livorno are found in slightly different versions in Jewish communities across other parts of Italy, as well as in Morocco, Turkey, Greece (including Corfu), France, Holland, England and the United States.

Outstanding examples include, the version of Psalm 29, mizmor ledavid, composed by Michael Bolaffi (still sung in many ‘conservative’ synagogues in the U.S); and the liturgical poem el nora ‘alilah sung during the ne’ilah, the closing service on Yom Kippur, which Daniel Bedarida delivers here a masterful version.

And so this remarkable and unbroken chain of tradition is continued in Livorno today by Daniel Bedarida, who provides in this double volume entitled Shemà Qoli such a comprehensive overview of the repertoire still in use in this important community.

Bedarida’s recordings expand other invaluable sources of Jewish oral tradition in Livorno, in particular the aforementioned volume of Consolo, and ethnographic records of the Italian-Israeli musicologist Leo Levi (1912-1982), which comprise about eighty songs and include the voices of A. Menasci, Simone Sacerdoti and Elio Toaff, made between 1954 and 1956. All of these sources, which together comprise more than a hundred years of musical and cultural Jewish history, allow us to study in detail the chronicle of the Livorno synagogue  and help us understand its development to the present day.

These new recordings by Daniel Bedarida make it possible to follow the Livornese liturgy step-by-step through the Jewish calendar, with songs for Shabbat, Rosh ha-Shanah and Yom Kippur;  Sukkot, Pesach and Shavu’ot, Simchat Torah, Purim and T’sha b’Av. His work also afford access to one of the highlights of the ‘life cycle’-  marriage,  with the ‘seven blessings’ recited in honor of the bride and groom.

As is clear, if one compares the melodies sung by Bedarida with sources already known, the hazan has provided us with flawless performances of pieces from the traditional repertoire of Livorno, focusing especially on songs from the consolidated presence of Portuguese Sephardim within the local oral tradition before the rise of the 19th century coral compositions and the wind of modernity.

Edwin Seroussi. Livorno: A Crossroads in the History of Sephardic Religious Music

The Port Jews of Habsburg Trieste