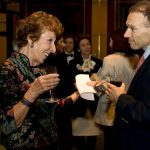 Stella Levi to Be Honored at the Museum of Jewish Heritage

On June 2, CPL Board member, Stella Levi will be honored at the Museum Of Jewish Heritage’s 19th Spring Women’s Luncheon, at the Pierre Hotel.

An Auschwitz survivor, Ms. Levi was deported from the Aegean Island of Rhodes, that had been under Italian rule since 1912.

Alessandro Cassin: What is for you the function and necessity of memory and remembering, and what does telling your story mean to you at this point of your life?

Stella Levi: The desire to remember, stems from the necessity to define and clarify my own identity. It took me a lifetime to be able to delve in all aspects of my story. At this point in my life, I feel an urgency for clarity, this is the right time to do it. My reading of Primo Levi’s works, as well as the activities of Centro Primo Levi opened up new horizons in my ability to think of my own story.

AC: Tell us about some specific traits of Jewish life in Rhodes.

SL: Judaism, more than a religion, was a way of life. The Jewish calendar dictated the rhythm of our daily lives. The spirit in which we sung our songs (in Hebrew and Ladino), prepared our foods, and arranged our house had a specific Sephardic flavor. We lived in the Juderia which was surrounded by the Greek, Muslim Turk and Italian Catholic districts. I never felt as a guests there: Rhodes was our tiny share of the Earth.

AC: Listening to you, we are brought back to a Rhodes that no longer exists. How did you manage to keep memories and sensory impressions alive?

SL: Memory works in many different ways. As the Nazis managed to obliterate the Jewish Community of Rhodes, it became the responsibility of those who knew it to preserve it at least through memories and tales. I have a razor sharp memory for smell, color, and taste. Yet only going back to Rhodes I realized I also possess a photographic memory: I remember the faces of all our friends and neighbors and can associate each face with each house. From that photographic memory, names begin to come back, then conversations, episodes…

AC: What would you like to communicate through your memories and experience?

SL: I have always tried to make sense of this story as a human story, whereas I would generally be given the place of the victim. I want people to be able to see beyond the victim. I want to encourage others to look at this history not only in scientific terms or as a question of good and evil, but rather as a way into human introspection.

Mankind is capable of innumerable atrocities. The Shoah is unique. At the origin of the Nazi persecution of the Jews there was no dispute over land or possessions but an intention to annihilate them. The Nazis acted on a hatred that developed over two thousand years and made it “modern. Unlike the Inquisition, they did not give us a chance to convert and become someone else. They wanted us to physically disappear.

What I continue to ask myself is why the rest of the world turned its face away.

Venice: A Symbol of Jewish History

Should we assume, as we usually assume in ordinary parlance, that the word “symbol” signifies something beyond what appears at first glance, we should, I will argue, agree that Venice…