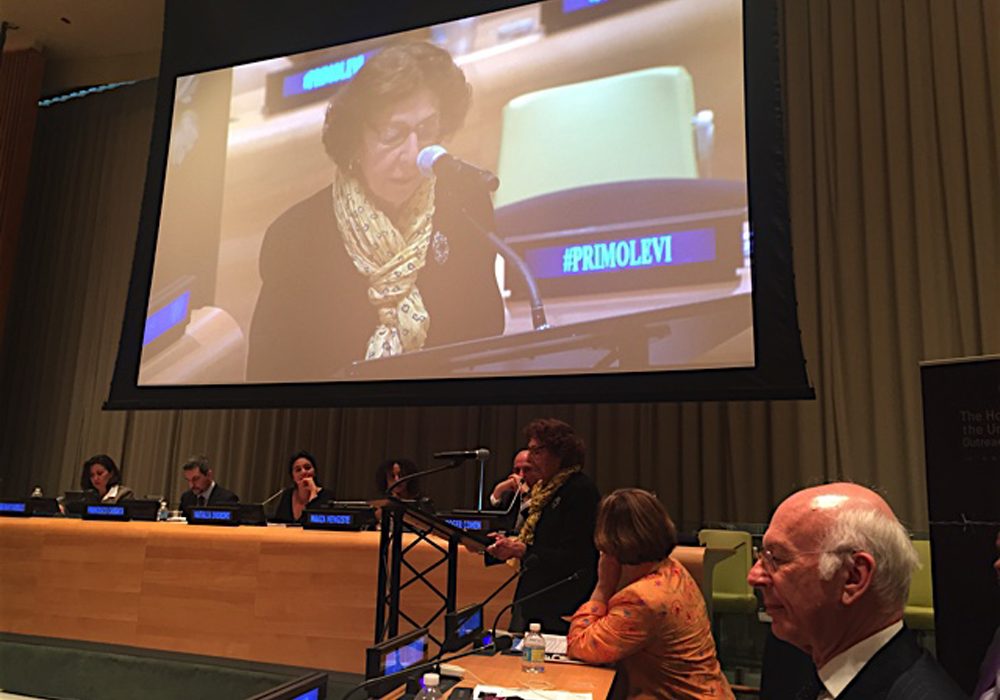 Stella Levi
Stella Levi is a member of the Board of Directors of Centro Primo Levi NY. She was born on the Island of Rhodes under Italian rule. On 23 July 1944, she, her immediate family and the entire Jewish community of Rhodes, comprised of 1,870 people were deported to Auschwitz. She has long been involved with the reconstruction and preservation of Sephardic and Italian Jewish life and traditions, offering her knowledge, guidance and dedication to the Jewish Museum of Athens, the Jewish Museum of Rhodes, the Museum of Kehilah Kedoshah Janina, the Sephardic House and the American Sephardic Federation. Ms. Levi is currently working at a project on the memory of the Shoah in the 21st century.

As a board member of CPL NY, which I was asked to represent this evening, I am honored that the United Nations, chose for the commemoration of Yom Ha Shoah, chose to pay homage to Primo Levi’s reflection on justice and humanity.

As a survivor  of Auschwitz and few other camps in Germany, tonight, 71 years after the end of the Second World War, I want to share with you my thoughts and my reasons for my commitment to the work of our center, and what ties me to Primo Levi’s experience and legacy.

I was born on the island of Rhodes, which at that time was under Italian sovereignty.  Following the promulgation and implementation of the Fascist Racial Laws in 1938, being an Italian Jew, I was stripped of my rights as a citizen. I suffered the humiliation of being expelled from the Italian school where I was a student; my father lost control over his business; my growth and my dreams, big and small, were stunted.

But the worst was yet to come.  Six years later, in July 1944, our entire Jewish community, nearly 1800 people, was forced out of its ancestral home, loaded onto boats, and then on trains to be taken to Auschwitz-Birkenau. At the end of the war only 151 of us survived.

I remember well that hot July day, as the sirens sounded the command for the entire civil population of the town of Rhodes to withdraw from sight.  The island felt utterly deserted. Only a few brave people dared to come to bid us farewell, hiding behind the trees in the garden across from the headquarters of the Italian Airforce, where we had been held captive for several days by the Germans who had taken control of the island. I caught a glimpse of some faces:  I recognized my friends Michele Papathanisis, his brother Yotis, and Victoria Licitri. In the look on their faces I saw mirrored our abysmal condition. But how could we have been anything other than demoralized and humiliated? We had just been cast out from the Juderia, the Jewish district, like stray dogs, abruptly uprooted from the place I called our piece of the earth, Rhodes.

Years later, I came to read Primo Levi’s “La Tregua”, in English The Truce, published in 1963.  When I came upon the passage where Levi describes the horrified look on the faces of the Russian cavalry that liberated him at  Auschwitz, I was reminded of the look on the faces of my friends of so long ago in Rhodes.

Primo Levi describes this look as the one of “vergogna”. In English you would say shame or disgrace, but in this context it feels bigger than both: shame at the awareness of the heinous acts that man can inflict on another man. It calls to mind a phrase I recently heard that Hannah Arendt had used to encapsulate the crimes committed by the Nazis—–it was a recognition that, as Arendt puts it, a group of people had done something to “eradicate the very concept of a human being”.

I was liberated by the American Army on April 30th, 1945 at Allach, a sub-camp of Dachau. With me were my sister Renee and a small group of friends from my community of Rhodes.

Notwithstanding, the cheering of the American soldiers, and the news  that we were finally free, I myself had a feeling of “vergogna” at the wretched, subhuman conditions we had been put through.  And for the first time we all felt the need to cry out loud, to mourn the losses: of our parents, our homes, our dead.

Many survivors have written of their experiences of life in the Lager, and some with ability and perspicacity; to me, Primo Levi’s writings stand apart: His is the voice not only of the Jewish survivor, but foremost the voice of the man, the human being.

In reading Levi’s memories, I recognized certain situations that he recalled as my own: like when he writes about how the Greek and Italian Jews were handicapped by not knowing either German, or worse, Yiddish, which happened to be the second language in the camp, and not being considered Jews by the other Jewish inmates for not speaking nor understanding Yiddish.

Somehow, we did find the will to fight in every way possible to conserve life and retain any little bit of what it meant to be a human being. La Fortuna “Luck“was with us: there was a group of French and Belgian women who also spoke Yiddish and some German: and we did speak French: immediately we banded together, till the liberation: in my mind, our grouping with them was an essential factor contributing to the survival of many of us. Particularly, it has been for my sister’s and for meLet me explain…

When the day came that my sister was to be transferred to another camp, I did everything possible to have her stay with us. My good friend, Madam Katz, one of the Belgian women in the group, came with me to the front gate of the camp, praying for a miracle. The German guard on duty that night was Erika, who had a soft spot for us Italian girls: we often sang Italian songs which she liked very much–I don’t believe she understood a word of them.  At a particular moment Erika came out of her barrack: with the help of Mme Katz, I explained the situation to her. She thought for a moment and then asked for the number tattooed on my sister’s arm.  She went to the Registrar of the camp and replaced it with someone else’s number. Renee and I remained together, always sustaining each other.

Was that “La Sfacciata Fortuna”–Shameless Luck?–to use another expression of Primo Levi”.  Maybe it was luck, aided by our strong will to survive, and also to win: yes to win against the arbitrariness of the life in the Lager, where you could not decide for yourself when to eat, and what to eat, when to work, what work to do, when to go to sleep and when to rise, and above all who lives, and who dies. That’s what slavery is.

Do I feel guilty, or shame, that I had been fortunate, at the famous selections when to be sent to the right, instead than to the left, meant to be gassed? Or shame for stealing from the kitchen where I worked for a short while, or stealing potatoes from the fields? Do I feel guilty for having survived? Not then and not now:  the only question I do ask is why: why me and not any other young person just as strong, just as able. Why?

Primo Levi said, speaking of life in the Lager, “There is no why here.”  Nevertheless we are always asking: why and how did it happen? Surely the Germans couldn’t have done what they did if the rest of Europe and other “civilized” people did not turn their faces away, and refused to hear about it, or had the guts to do something.

Let us hope that my remarks here today, as well as those of the distinguished speakers who will follow me, will resonate outwards from this institution which represents the community of Nations, reverberating throughout the world at large. We may not be able to answer the why, but we must always ask the question.  Thank you.