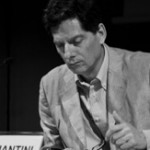 Massimo Bucciantini, University of Siena
Massimo Bucciantini is a a History of Science professor at the University of Siena. He is the co-editor (with M. Camerota) of Galilaeana: Journal of Galilean Studies, the first issue of which was released in June 2004. He is the author of several essays on 17th-century astronomy and philosophy; among his recent publications: Celebration and Conservation: the Galilean Collection of the National Library of Florence, in M. Hunter (ed.), Archives of the Scientific Revolution, Rochester 1996; Nuova cosmologia e teologia, in J. Montesinos, C. Solis (eds.), Largo campo di filosofare. Eurosymposium Galileo 2001, La Orotava 2001; Contro Galileo: alle origini dell’”affaire”, Florence 1995; Galileo e Keplero. Filosofia, cosmologia e teologia nell’Età della Controriforma, Turin 2003.
The second Primo Levi Lecture was presented by Massimo Bucciantini, Professor of History of Science at the University of Siena-Arezzo, on November 11, 2010. A large audience and three classes of the Liceo Scientifico Galileo Ferraris have gathered in the Great Hall of the School of Natural Sciences, Physics, and Mathematics of the University of Turin. Auschwitz Experiment has been published by Einaudi in April 2011.

First of all, let us make some sense of the title, taking a cue from the words of Primo Levi: “Thousands of individuals, differing in age, condition, origin, language, culture and customs, are enclosed within barbed wire: there they live a regular, controlled life which is identical for all and inadequate to all needs.”

This is the beginning of one of the most celebrated passages of If This is a Man, a genuine description of a mental experiment where every term has been chosen with a maximum of care and precision, exactly like the procedures in a scientific context.

As if this were not enough, this passage is preceded by a word of warning that underlines the importance of the experiment and strengthens the conciseness and the terminological rigor all the more: “We would also like to consider that the Lager was pre-eminently a gigantic biological and social experiment” (p. 93).

Levi wonders how a sample of humanity would behave under certain constantly controlled conditions of life, a sample that has not been chosen in advance and therefore represents the human material in a precise way. What is left of humanity? What, in such an extreme place, is essential in how humans behave and what, instead, is acquired? With Levi, Auschwitz has become, for the first time, the name of a scientific experiment, one of the most terrible of all the experiments invented and created by people against other people.

Thus Levi’s writings are the first ones that turn Auschwitz into The Auschwitz Experiment, and this is what makes If This is a Man is a true and inimitable book.  Yet, it takes more than just any witness-writer to tell the story of Auschwitz in this way.

Turning Auschwitz into The Auschwitz Experiment is a something that directly summonses Levi’s essence as a one-of-a-kind writer and a chemist.

The writer and the chemist are inseparable, two faces of the same coin.  Levi dedicated his whole life to understanding the most hidden mechanisms of this experiment, which he considered “the product of a conception of the world carried rigorously to its logical conclusion” (If This is a Man, p. 15). After Levi published his first book, there were several issues that he still needed to take up, but there was one in particular that was worth investigating, the one that became famous under the name of the “gray zone.”  This time too he entrusted his efforts to a mental experiment, a “conceptual experiment,” as he called it.

This one is a little different than the ones we have encountered so far. Levi wanted to lead his readers beyond a schematic and superficial kind of morals founded on a clear division between victims and oppressors. He wanted them to reflect on the existence on a broad zone where the infinite number of shades of evil crisscross and coexist.

To do this, he bid his readers to undergo an experiment that begins with the following words: “I would invite anyone who dares pass judgment to carry out upon himself, with sincerity, a conceptual experiment: Let him imagine, if he can, that he has lived for months or years in a ghetto… that, finally, he is loaded onto a train, eighty or a hundred persons to a boxcar; that he travels into the unknown, blindly, for sleepless days and nights; and that he is at last flung inside the walls of an indecipherable inferno” (The Drowned and the Saved, p. 59).

Levi acknowledged that the idea of clarity as a clear distinction, sharp as a blade, which appeared in If This is a Man, was a concept that was too abstract to be applied to the varied world of people-animals. His recognition of the gray zone is his admission that this is impossible as well as the victory of the blurred off-colors of ambiguity.  Here lies the secret of the Auschwitz Experiment that Levi discovered in a definitive way in The Drowned and the Saved.

The world down there and our world are joined by a vast and unforeseen kind of sunken passage. In effect, there is only one world, just as there was only one Gattermann [chemistry textbook]. The one lying on Pannwitz’s desk at the office of Kommando 98 was exact the same as the one resting among the bookshelves in the library of a young chemical student in his house in Turin.

Kabbalah in the Age of Reason: Elijah Benamozegh This talk was presented at the symposium “Humanism and the Rabbinic Tradition in Italy and Beyond” organized by Centro Primo Levi and …