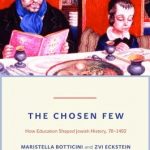 Maristella Botticini, Zvi Eckstein
Maristella Botticini is professor of economics, as well as director and fellow of the Innocenzo Gasparini Institute for Economic Research (IGIER), at Bocconi University in Milan. Zvi Eckstein is the Mario Henrique Simonson Chair in Labor Economics at Tel Aviv University and professor and dean of the School of Economics at IDC Herzliya in Herzliya, Israel.

In 70 CE, the Jews were an agrarian and illiterate people living mostly in the Land of Israel and Mesopotamia. By 1492 the Jewish people had become a small group of literate urbanites specializing in crafts, trade, moneylending, and medicine in hundreds of places across the Old World, from Seville to Mangalore.

What caused this radical change? The Chosen Few presents a new answer to this question by applying the lens of economic analysis to the key facts of fifteen formative centuries of Jewish history.

Maristella Botticini and Zvi Eckstein show that, contrary to previous explanations, this transformation was driven not by anti-Jewish persecution and legal restrictions, but rather by changes within Judaism itself after 70 CE–most importantly, the rise of a new norm that required every Jewish male to read and study the Torah and to send his sons to school.

Over the next six centuries, those Jews who found the norms of Judaism too costly to obey converted to other religions, making world Jewry shrink.

Later, when urbanization and commercial expansion in the newly established Muslim Caliphates increased the demand for occupations in which literacy was an advantage, the Jews found themselves literate in a world of almost universal illiteracy.

From then forward, almost all Jews entered crafts and trade, and many of them began moving in search of business opportunities, creating a worldwide Diaspora in the process.

The Chosen Few offers a powerful new explanation of one of the most significant transformations in Jewish history while also providing fresh insights to the growing debate about the social and economic impact of religion.

“Maristella Botticini and Zvi Eckstein have written a remarkably interesting book with a new hypothesis about the occupational structure of the Jews. The authors adduce serious evidence for their hypothesis, which lays stress on the requirement introduced nearly 2,000 years ago for universal male literacy among the Jews. This is a fascinating and persuasive combination of history and economics, worth reading by all, even the unhappy few who like neither history nor economics.”–Stanley Fischer, governor of the Bank of Israel

“The Chosen Few is a masterpiece: an ambitious, informed, and inspirational reinterpretation of Jewish social and economic history.”–Avner Greif, Stanford University

“In this bracing work of economic history, Maristella Botticini and Zvi Eckstein demonstrate how literacy and contract law combined to give Jews a competitive advantage in urbanizing societies. Sure to generate controversy, The Chosen Few takes on one of the truly big questions in Jewish history and sheds intriguing new light on it.”–David Biale, University of California, Davis

“Botticini and Eckstein are changing the way economic historians think about Jewish history, and this seminal book will also change the way historians, Jewish studies scholars, and general readers think about the subject. Indeed, the importance of this book can scarcely be exaggerated. An excellent example of economic history that is accessible to general readers, The Chosen Few makes a compelling case for an exciting new perspective that will inspire much further research and be the focus of attention for years to come.”–Carmel Chiswick, George Washington University

Giorgina Levi (1910-2011) was an Italian historian, member of Parliament and public intellectual. Born in Turin from politically engaged parents, following Mussolini’s Racial Laws,  was forced to emigrate to Bolivia…