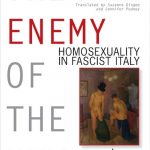 Lorenzo Benadusi, The Enemy of the New Man: Homosexuality in Fascist Italy, University of Wisconsin Press, 2012

In this first in-depth historical study of homosexuality in Fascist Italy, Lorenzo Benadusi brings to light immensely important archival documents regarding the sexual politics of the Italian Fascist regime; he adds new insights to the study of the complex relationships of masculinity, sexuality, and Fascism; he explores the connections between new Fascist values and preexisting Italian traditional and Roman Catholic views on morality; he documents both the Fascist regime’s denial of the existence of homosexuality in Italy and its clandestine strategies and motivations for repressing and imprisoning homosexuals; he uncovers the ways that accusations of homosexuality (whether true or false) were used against political and personal enemies; and above all, he shows how homosexuality was deemed the enemy of the Fascist “New Man,” an ideal of a virile warrior and dominating husband vigorously devoted to the “political” function of producing children for the Fascist state.

Benadusi investigates the regulation and regimentation of gender in Fascist Italy, and the extent to which, in uneasy concert with the Catholic Church, the regime engaged in the cultural and legal engineering of masculinity and femininity. He cites a wealth of unpublished documents, official speeches, letters, coerced confessions, private letters and diaries, legal documents, and government memos to reveal and analyze how the orders issued by the regime attempted to protect the “integrity of the Italian race.” For the first time, documents from the Vatican archives illuminate how the Catholic Church dealt with issues related to homosexuality during the Fascist period in Italy.

Reviews
“The Enemy of the New Man offers many rare insights into Mussolini’s totalitarian ‘experiment’ in actively shaping the laws and cultural codes that regulated gender and sexuality during the Fascist period in Italy. Benadusi goes well below the surface rhetoric about the virility of the Fascist ‘New Man,’ offering an important new understanding of actual practices of sexual repression during the Fascist period and the specific legal and punitive measures elaborated for the regimentation of the sexual lives of Italians. It is a book that takes many risks and offers significant rewards.”—Patrick Rumble, author of Allegories of Contamination

“A brilliant, luminously eloquent study of the unique nature of Italian fascism’s efforts to manage masculinity, homo- and heterosexual alike, but also much more than that. Breathtaking in the scope of its source materials and the acuity of its analyses, The Enemy of the New Man advances the history of Catholicism and the comparative history of fascism, and above all offers numerous insights into how post-liberal and totalitarian systems work through sexual politics.”—Dagmar Herzog, author of Sexuality in Europe: A Twentieth-Century History

The Hebrew Book in Italy