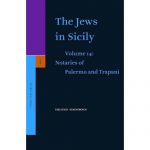 Shlomo Simonsohn
Shlomo Simonsohn is Professor Emeritus of Jewish History at Tel Aviv University. He is a former rector of the university and former chairman of the Rectors and Presidents Conference of Israel. He has published extensively on the history of the Jews in Italy, the Papal See and the Jews, and cognate subjects.
This volume of the Documentary History of the Jews in Italy is the first of the second series, illustrating the history of the Jews in Sicily based on notarial and court records. It is the sequel to the eight volumes of the first series. Notarial deeds drawn up by public notaries in Palermo and elsewhere and cases brought before the Pretorian Court in Palermo present a kaleidoscopic picture of the private lives of the Jews of Sicily during the last three centuries of their presence on the island.

They illustrate the economic, social, and religious history of the Jewish minority and the relations with the Christian majority. Much information is provided on trade and commerce, crafts and professions, religious and family life. Some light is thrown also on the internal life of the communities, particularly the larger ones, including organization and institutions, the synagogue, education, customs and traditions.

Although the surviving legal deeds present only a fraction of the total drawn up in those years, they are copious and abundant. Over 30,000 documents of this group were selected for publication. While some documents were dealt with at length, most had to be presented in summary form, giving only the bare essentials. Most appear here for the first time. The volume is provided with additional bibliography and indexes, while the introduction will appear at the end of the series.

This volume in the series Documentary History of the Jews in Italy illustrates the history of the Jews in Sicily during the last decade of the fourteenth century and the first two of the fifteenth. It is the sequel to the first and second volumes on the history of the Jews in Sicily, and illustrates the events during the political upheavals which preceded the reunion of the island with Aragon. During that period the Jewish minority flourished, although affected by unsettled political conditions, along with the rest of the population. Over 500 documents, many of them published here for the first time, record the fortunes of the Jews and their relationships with the authorities, especially the two Martins, and their Christian neighbours. Much new information has come to light, and many facets of Jewish life in Sicily have been uncovered.
The abundance of historical records in the archives of the Crown and of local authorities compares favourably with the relative scarcity of surviving documentation in earlier centuries. Therefore, again, many documents had to be reported in summary form. Much new information has come to light. The volume is again provided with additional bibliography and indexes, while the introduction has been relegated to the end of the series on the Jews of the island.